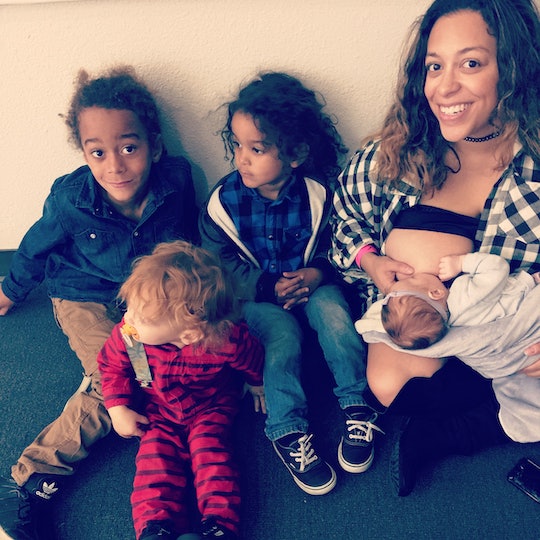 The best parents on the planet are those parents who don’t actually have children yet. The ones that think it’s so easy to just go to a restaurant and keep the kids quiet and not spill drinks and destroy the Sweet and Low packets. Those parents are also the ones that I think it’s so easy to just stuff yourself into bathroom stall and feed your baby or that it’s so easy to latch a baby to your breast while they are screaming, crying, hungry and probably tired all while not being able to see them because they are under a Hooter Hider. I use to be that parent, even after I had kids. I remember circa 2009 and 2010 I would get so upset when I would see mothers who were just out their blaring their nips had no great good damns to give. I believe the first “nurse-in” I ever read about was a mom who got shamed for nursing in public in the middle of a Target. I completely understood the public outrage over this mom thinking she could just post up in the middle of Target and whip her boob out. I remember writing about the various reasons why these women shouldn’t be able to do that and theorized all the reasons they probably did it. For attention, they’re exhibitionist, they have no morals, et cetera. Of course, I didn't have kids.

It was October 2012 when I finally gave up my Hooter Hider.

The best thing about pre-parents is when they get royally gobsmacked when they realize that people don’t just let their kids cry in restaurants for sport. And that children really do hear that bedtime is at 7:30 p.m. and think that it’s the suggested time. This happened to me in 2012 after I had my second son.

It was October 2012 when I finally gave up my Hooter Hider. We were living in L.A. and the Endeavor space shuttle was set to make its way through the mean and very, very crowded streets of our city. My husband and I thought it would be a great idea to take a 4-year-old and a newborn out in to this moment in L.A. history. We of course didn’t anticipate how large the crowds would be (and neither did the LAPD) and there were just clusters of people everywhere and to make matters worse we tried pushing our way through the crowds with this larger than life stroller.

Caspian needed to eat like every five minutes and I kept trying to get him to latch and eat. But he kept pulling off and just couldn’t settle. Murphy’s law of parenting will tell you that it’s at moments like this when the other children need to eat, pee, poop, or throw up. Sometimes all at once. Right at this moment of course Phoenix needed to pee. While my husband fought his way in the opposite direction of the crowds to find a place that was relatively clean for Phoenix to pee in, I turned my attention to the crying baby. I tried putting him in my Moby wrap and feeding but hadn’t yet mastered that circus act. Standing up was hard to do it because I had to latch him, while holding up my enormous boob while trying not to suffocate him and maneuver with the Hider.

I wasn’t trying to get cat-called by random freaks. I literally just wanted to feed my baby and I didn’t care what anyone thought.

So I finally just sat down on the sidewalk and ripped the Hooter Hider off and tossed it into the street (okay maybe not really, but dramatic effect and all) and I nursed him. Traffic was stopped in every direction which made me the street entertainment for all of the people milling about. But I didn’t care because it was hot and crowded, he was hungry, and I was frustrated.

During that moment it all clicked for me. I wasn’t thinking about trying to stay modest for the people around me. I wasn’t trying to get cat-called by random freaks. I literally just wanted to feed my baby and I didn’t care what anyone thought. I felt liberated and free to just be me.

My feeding in public tour didn’t just stop there. I went on to make appearances at the pumpkin patch, restaurants, school assemblies, backstage at a Justin Timberlake concert, and even church. I wish I could say this was all done unnoticed and without a lot of fanfare, but it wasn’t. I’ve had people offer me blankets and jackets. I’ve had girlfriends and wives tap their husbands and boyfriends on the shoulder to point me out to them (which really confuses me). I get that it can be a jarring sight to be enjoying some chicken parmesan at Buca di Beppo and see an 8-month old pregnant lady nursing a 2-year-old toddler with giant knockers (true story) but just stop staring.

The more people stared the more I did it. But not because I enjoyed the attention but because I felt like people needed to see it. The more you see something that isn’t the norm the more normal it actually becomes. I’ve considered myself to be sort of a secret and silent activist for the “free the breastfeeder” movement. It's not a thing yet, but if anyone wants to come burn their Hooter Hiders with me, I'm in.

More Like This
Can You Mix Breast Milk & Formula? Experts Weigh In
Here’s Your Guide To Paced Bottle Feeding
13 Nursing Bras & Pumping Bras You'll Actually Love To Wear
If Breastfeeding Makes You Tired, Here’s How To Keep Your Energy Up