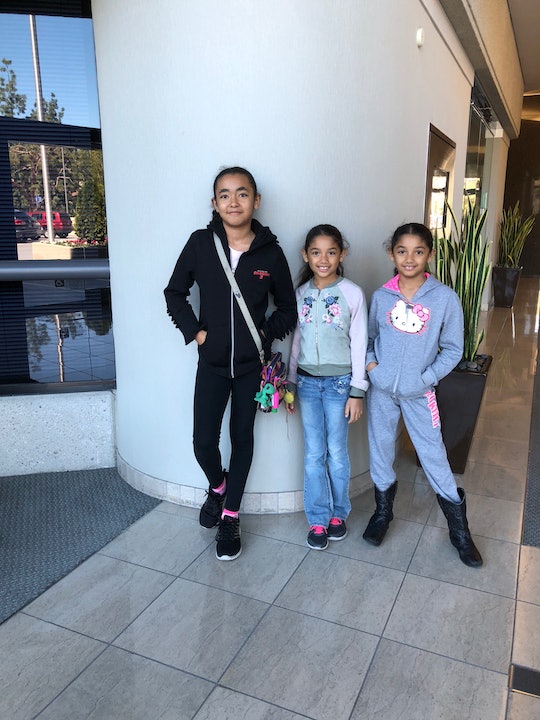 I Skipped Back-to-School Night At My Kids' School, & I Didn't Burst Into Flames

I have three daughters in the same school, 9-year-old twins and an 11 year old, in the 4th and 6th grade, respectively. They go to a public charter school that centers around the arts and arts-based projects. I’m very grateful that they get to go to such an amazing school, but the administration expects parent involvement quite often. I’ve always gone out of my way and inconvenienced myself and my family to make an effort, but this year I said no to attending back-to-school night.

I put a lot of pressure on myself to be a good mother, as I’m sure you all do. Being overly involved with my daughters in school made me feel good and it made my daughters feel good. Having a baby changed that, and I was afraid they would become jealous of their little brother Kai, or resent him. It took a lot of conversations and understanding on their behalf. They showed a certain kind of maturity about the situation, which I was quite proud of. But unfortunately, that didn’t stop my "second-child guilt." Though he was my fourth child, I felt the pressure of not being able to be there for my older kids the way I used to.

When I got the email stating the date of this year’s back-to-school night, I had every intention on going. I entered it into my iPhone calendar and started planning ahead. Thankfully my aunt was here and she could watch all four kids, or I could just take the baby. Once I realized that it started at 5:30 p.m., I scoffed. I knew my husband wouldn’t be home in time to go with me and I knew the entire thing would just be a huge headache! Then I started thinking about my reasoning for going. Was there a reason for me to actually go? The twins have the same teacher they had last year, a very sweet, amazing person who I’ve had the pleasure of being able to speak to on multiple occasions. She been great for my girls’ self esteem and I felt lucky that they got to be in her classroom for the second year in a row. Of course, I hadn’t met my eldest daughter's teacher yet — she was starting middle school. I felt as if as a good parent, I should go. I should meet her new teacher, see her new classroom and find out what was to be expected of her.

The day before, I had every intention of going, then my anxiety kicked in. I’ve been on medication for social anxiety for over a year now, but it only helped to some extent. Part of it is mental and, usually, I’m anxious leading up to an event, then fine when I get there. I’ve even spoken to my therapist about coping mechanisms and how to implement them in times of great need. I no longer had major panic attacks, which is awesome, but I still felt the extreme nervousness. Was it worth going through all of that to attend the school for just an hour to meet one teacher? I weighed my pros and cons the night.

By the next day, I’d told the girls that I wasn’t going. It would involve ditching Kai and rushing out — the entire idea stressed me to no end! My kids said they understood and it didn’t seem to disappoint them. They said they would’ve cared more if they were able to go (since it was a kid-free night at the school).

The first year my girls got to go to this school, I wanted to be 100 percent involved: I read every single email, I had my calendar packed with events! They also had after school play dates at the public park near the school, and special days at the school showcasing the student’s arts. Realistically, I know the school's PTA and administration doesn’t expect 100 percent participation from all parents. I think a lot of the pressure I felt, I put on myself.

At their old school, before I had my son, I volunteered in their classes and I went on the school field trips as a chaperone. Once I had Kai, everything changed. I shouldered the blame myself, but my husband, who works full time, of course missed far more than I did.

No one is coming for you for skipping back-to-school night; no one is tallying up the events you make and the ones you don't. Even your kids understand. The mom guilt you get from not being the mom running the PTA show is not entirely imagined — there is pressure from other parents who don't want to be the only suckers there color-coding the fundraiser binder — but trust, you do not have to be there for all of this stuff. Don't forget why you chose this school: so your kids could go.