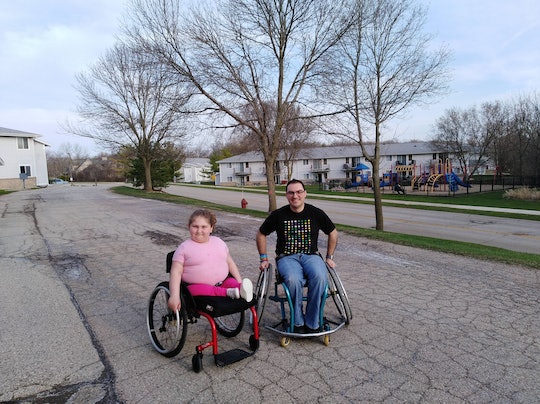 I Spent An Afternoon Putting Myself In My Daughter’s Wheels, & I Should Have Done It Sooner

My 9-year-old daughter Namine (pronounced NAH-mee-nay) and I had planned on going for a run one evening. After I got home from work, I changed into my running gear. “Ready to go?” I asked. She was nearly out the door already, but then she had an idea. “Daddy,” she said, “do you want to wheel with me instead?”

Namine uses a wheelchair to get around outside our apartment. We enjoy running together, but this — my using a wheelchair to go on our run — was a first. She has a sport wheelchair on loan from her basketball coach. Unlike her everyday chair, it’s not custom-made for her; it’s just the closest fit for her size.

“Sure,” I said. We went to the garage where we keep the sport chair and she helped me get situated. The sport chair has no brakes, so Namine locked her own brakes next to the chair and kept it from rolling away as I buckled myself in.

When Namine and I started running together a few years ago, I pushed her in her wheelchair almost exclusively. As she has gotten stronger and faster, she has pushed herself more and been able to keep up with me.

I remember on one of the more recent runs we took together, we were on the sidewalk. It was too narrow to go side by side, so Namine led and I followed. I watched her pushing herself in her chair, and it seemed to me that she wasn’t going in a straight line. She would push with both hands evenly for a while, then she would hold on to one wheel and continue pushing with the other, and vice-versa.

On our “wheel run,” as Namine puts it, we took that very same sidewalk. I quickly discovered that I had to constantly adjust myself. The sidewalk may have looked even, but it wasn’t.

Namine quickly outpaced me, calling back, “Keep up, slowpoke!” I struggled to keep up as she increased her speed, constantly pushing herself forward while at the same time making small adjustments  —  a slight wheel grip here, an uneven push there  —  which kept her going straight on an uneven terrain.

No wonder she didn’t know what I was talking about when I’d asked her. By now it’s second nature to her, and she doesn’t even notice it.

There is the ever-present notion that as the parent, I’m right and she’s not.

All this was on relatively flat ground. Namine had no problems navigating the sidewalk, but I went onto the grass several times once it started to curve. She circled back to me, locked her brakes and helped pull me back onto the pavement.

The two-mile circle we took on our wheel run is not flat, however; there are hills, and this was an all new experience for me. I have chided Namine in wheeling slowly up the hill to our apartment, but having had the experience firsthand, I will check myself in the future. She easily beat me in speed going up the hills on our run, laughing at how slow I was.

“Not so easy when you’re not walking, is it, Daddy?” she asked me, not without humor. She might have been angry with me for my ableist attitude, and she would have been right. I’m fortunate to have a daughter who does not hold my shortcomings against me, but rather who is willing to work with me, teach me, and explain to me. I certainly do not deserve it.

As the able-bodied parent of a disabled child, it’s easy to dismiss what my daughter tells me. There is the ever-present notion that as the parent, I’m right and she’s not. But she has life experiences I do not, and I would be foolish  —  I have been foolish  —  to dismiss what she tells me.