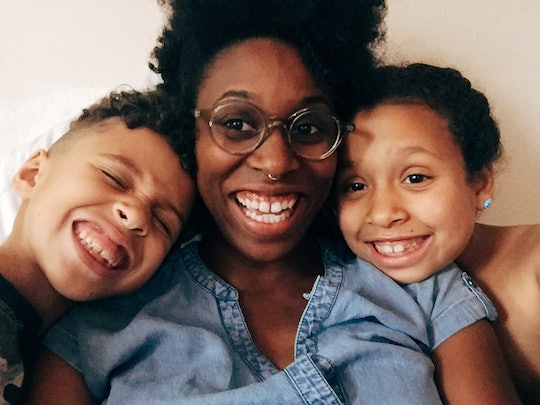 Before I became a mom, I swore I'd never let my children sleep with me. I swore I'd never give in, that I'd be firm, that I wouldn't turn into one of those parents who had their children in their beds way past when they should. I told myself I'd never be "weak," and I honestly believed that my children would never wear me down. I thought I'd remain strong, that I would always follow through on what I wanted to do as a parent. I didn't think I'd ever flip flop on my decisions. But it's been six years, and both of my children still share a bed with me, and I love it. I think, if anything, I love having a family bed even more now than I did when they my two kids were babies.

My daughter was 14 months old when her brother was born. She was in a toddler bed, and had been putting herself to bed for six months. She never slept in our bed, only came in for morning cuddles. Sleep training her was extremely easy, and she didn't struggle sleeping on her own. Yet, when we brought her brother home from the hospital, she started coming into our room in the middle of the night to help us feed him. She wanted to be close to him, so she'd climb into bed with us and cuddle. We thought it was so cute, until we realized about six months later that she hadn't slept through the night in her own bed since my son was born.

It was then I realized I always took him out of his crib to sleep on my chest. I never sleep-trained my son, but I rocked him to sleep at nap time and bedtime. The first time I ever laid him down for a nap on his own, just before he turned 2, I cried. So did he. But he stayed in bed, and eventually fell asleep. That wouldn't last though.

Every morning our daughter would sit up and shout, "Good morning! I love you guys! I missed you so much!" and though we would groan, my ex and I couldn't help but smile at how much she loved being close to us.

My ex-husband had no issue with the kids being in the bed when they were small, but as they grew, and their bodies did too, we had more and more restless nights. Each child had a parent they'd snuggle up to, as close as possible, forcing each parent off the side of the bed. There were knees and elbows in our backs, in our necks, and in the most random places we still don't understand how the kids could get to. My son in particular loved wrapping his whole body around my head, like a cat. He would try to be as close to me as he could, and hold on so very tight. There were so many nights I hated it, but every time he would whisper, "I love you so much mommy," I couldn't stay angry.

And every morning our daughter would sit up and shout, "Good morning! I love you guys! I missed you so much!" and though we would groan, my ex and I couldn't help but smile at how much she loved being close to us.

It's not that the kids didn't have their own beds, because they did. While they started every night in their own beds, they insisted on sharing one, they would come down into our bed after about four hours on their own. I always appreciated how easy it was for them to just climb in and get settled. They were so comfortable and felt so safe next to us. It was something they looked forward to. But every time we had the conversation about getting the kids out of the bed, I'd be a little sad, but we would try anyway. There would be crying and pleading from the kids and at times, it felt like torture. No matter how hard we tried to keep the kids out of our bed, it never lasted. I always gave up the fight and would promise I'd try another night. And so the kids came back into our bed.

Sleeping in the same bed with their dad and me while we were together was one way of showing them I respected their wishes.

Eventually I stopped having the conversation with my ex-husband about transitioning them to their own beds because I assumed they would just stop themselves when they were ready. When I first started parenting, I modeled a lot of my beliefs and actions after my own parents' way of raising me. I truly believed I knew what was best for my children, having made them and all. My mom always told me that she knew me better than I knew yourself, which never sat well with me, especially when she'd tell me I liked something I knew I didn't. There were times of course, when she was right, but a lot of times she was so far off. I realized I didn't want to be like that, and I was surprised how much my own parenting style has evolved and changed.

As I've watched my children interact with the world, I've learned how they voice their needs, their wants, and their dislikes. Sleeping in the same bed with their dad and me while we were together was one way of showing them I respected their wishes.

If you'd asked me a few years ago about my feelings behind a family bed, I would've carried on about how I can't get my kids to stay in their own beds. But now I'm more than happy to talk about it, and share why I love it.

The kids tell me they want to sleep with me because they need me, and I believe them. Even though they're 6 and 7 years old, I welcome them into my bed. We still cuddle and I watch as they relax, and get cozy, the way they wrap their arms around mine, run their hands down my face, nuzzle my neck, and sigh softly. I take all of that in. I don't want it to end, because I know eventually it will, but for now it's where we are and I'm grateful for this time. In bed they are clearly calmer, feeling safe, and grounded.

Being close to me and their dad when they're at his house makes them feel like they are home. No matter where they are, they are with people who love them. For my kids, so much of the life we started out with together has changed. My ex-husband and I divorced. We moved. But no matter what, my kids know that we are home to them. I love that they can curl into our beds at night and feel safe and secure and loved. I love that they haven't lost that. If you'd asked me a few years ago about my feelings behind a family bed, I would've carried on about how I can't get my kids to stay in their own beds. But now I'm more than happy to talk about it, and share why I love it.

To be honest, I'm kind of in total disbelief. I was so adamant about not sharing a bed with my kids, yet here I am, waking up to two little people on either side of me and loving every single second of it.