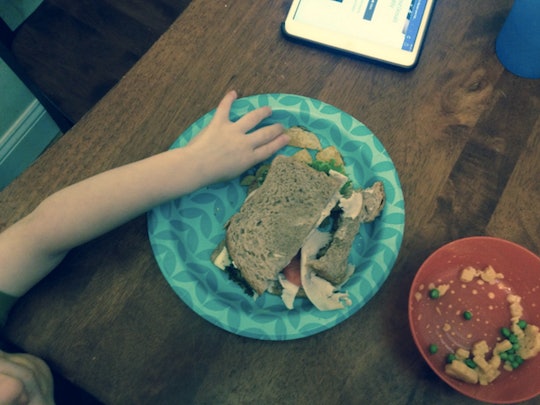 I Stopped Eating Dinner With The Kids For A Week, & This Is What Happened

With two 2-and-half year olds, meal times are less a relaxing chance to have a meaningful family discussion and more like that scene in Hook where the Lost Boys start flinging rainbow-colored goop everywhere. Even though I know eating together as a family has great long-term benefits for the kids, I spend most dinners pleading with them to come back and sit down at the table, trying to keep them off my lap and away from my own food, and chasing them into the living room so they don’t touch anything with their sauce-covered hands. Sigh. An open floor plan seemed like such a good idea before we had kids.

Even preparing meals is made more difficult when we eat together as a family. While my kids are willing to try new things, there are just some foods they won’t touch, and because my body can’t handle eating chicken nuggets every night, I’m often forced to cook two different meals while trying to time so we can eat together. The Iron Chefs might make it look easy, but I am sadly no Cat Cora.

I decided to try a week of feeding the children their meals before I ate my own to see if it would improve my sanity and my digestion. We typically eat as a family, with my partner and I seated at the dining room table and the boys eating at a kid’s picnic table next to us (we’ve learned the hard way that booster seats and kids who kick back from the table with their feet means lots of tears and panicked calls to the doctor when they fall on the floor). But this week, we’d eat separately: the boys first, and mom and dad later.

I planned to feed the kids their dinner while I kept an eye on them and once they were done, I’d reheat the meal or cook a grown-up meal so my partner and I could eat while the kids played. The hope was the kids would be less distracted without me nearby, that they'd eat more, make less of a mess, and that the adults would have the chance to eat together and have an actual conversation.

I Quickly Learned The Kids Won’t Let Themselves Starve

When we eat together as a family, I’m fixated on how much my kids are consuming. As an adult, when I sit down to eat, it’s usually bite, chew, repeat, and then I get frustrated when my kids don’t follow the same pattern. If I’m finished with my meal but the boys still have a lot of food on their plates, I usually find myself either trying to spoon-feed them like infants or offering to prepare them something else.

By giving them their own meal time, I wasn’t as conscious of the clock, and I realized they ate on their own timetable. While I had hoped to use the kids’ meal time as a time to catch up on housework, they didn’t like the fact that I wasn’t near them like I usually am during meals, so I granted their requests of “Mommy sit here!” and plopped down on the floor next to their table. Because I wasn’t trying to feed myself I was more laid back about how quickly they ate, and given enough time, they managed to clear their plates without my pleading or feeding them. This was so important for me to understand so that in the future, when we do eat together, I can relax a little and cut down on our food waste.

We had a busy afternoon running errands, so making dinner quickly turned into grabbing takeout. Because my children are surprisingly fixated on soda machines and will sit quietly eating their burgers while watching people go up to get refills, I realized we’d need to violate the rules of the experiment (just a little bit).

I didn’t want to go through a drive-thru, sit and wait while the kids ate and then have them sit while we ate our sandwiches, so I thought I could let them eat first, then we’d eat after they were done, just like at home. But it was impractical. The boys were fine and the food was calling us, so we ate with them. The kids were happy to enjoy the different surroundings and the adults got to eat dinner without having to yell at anyone.

I know I should feel guilty, but it’s hard to feel bad when you’ve just had a hot meal.

Have I Been Stress Eating?

When the kids are acting up at dinner or start sniffing around my plate, I often rush through my food just to be finished so I can focus on getting them cleaned up and the dishes squared away. Most nights after a family dinner, I have a stomach ache, which I’ve always attributed to eating too fast so I can tend to whatever they need. But I realize now that perhaps I’m accidentally overeating.

Because I wasn’t eating with the kids, this week I ate much more slowly and much less than I normally do. I made my favorite one dish Mexican skillet recipe this week, and while I’d normally go back for a second plate, without the kids rushing me I was full after a single serving. It takes 20 minutes for your brain to catch up with your stomach, and there was no way I usually give myself that time to see if I’m full.

Going forward, I want to be more mindful of how much food I’m actually eating, even if that means the kids are done long before I am.

Hands down the best part of this week was when my partner and I ordered out weekly take-out meal and ate it in blissful silence. We plan these date-night meals for days in advance, and while I always love not having to cook, when the kids are underfoot it’s hard to really savor the meal I’ve been looking forward to for so long.

Normally, we just pile the kids into the car and pick up our takeout to eat together at home. In some ways, it can be more complicated than cooking because if we order something the kids don’t eat, like Thai, when we get home I have to hurry to microwave some mac ‘n cheese and hope my food doesn't gets cold in the meantime. Even though the boys have perfectly good food in front of them, the temptation to “share” with mom and dad still strikes, and little hands come grabbing for our plates.

But since we weren’t eating as a family this week, we waited until the kids went to bed before getting our takeout (I stayed home and enjoyed some much needed alone time while my partner went to get the food). We got grumpy waiting a few hours past our normal dinner time before eating, but it was so nice to have a chance to talk and enjoy the food together instead of feeling rushed. It was just like going out to dinner, except we didn’t have to pay a babysitter, and I got to wear sweatpants.

Were We Losing Quality Time Together?

I was surprised by how much I missed eating with my kids this week. Although I often complain about the mess and stress of family dinners, losing them made me realize we were also losing a large chunk of time we usually spend together. I work from home, so I’m with my children more than most parents, but I still felt that by eating separately I didn’t get a lot of quality time with them. If they were in daycare for the majority of the day and we didn’t eat together, I’d probably feel like I barely got to see them at all.

I also realized the importance of putting down my phone when eating with the kids. I have a tendency to try and check in with my social media during family dinners, but this week, when I the kids were eating and I wasn’t, I gave them my full attention and they seemed much more calm and willing to eat their food without having to be begged or cajoled. I used to think their less-than-stellar table manners were just a byproduct of being toddlers, but it turns out it was really a combination of them not having my full attention and me having less patience because I was trying to eat and answer emails at the same time.

Making dinner an electronics-free zone could go a long way in making it feel less like a necessary evil and more like a time of the day I look forward to instead of dreading.

Even though it’s stressful having to make two separate meals and timing each to be finished at the same time, on the nights I know I’m making something the boys will eat it’s far easier to eat together as a family than warm up the adults’ dinner after. I made my adult-friendly chickpea mac 'n cheese that the kids also love, and while it’s normally delicious, it tasted grainy and gluey when I reheated it after the kids were done eating.

Plus, eating after the kids means I waste the entire evening in the kitchen. I resented having my evening basically lost just to make the same meal twice.

Not eating as a family made me like I was treating my kids as a burden; like I was trying to feed them and then shoo them away from me. Even though I was in the room with them while they ate, they definitely knew something was different and were confused. And my dreams of them playing quietly while we ate dinner were a total joke — the kids love being with us and treating our plates as potential second dinners.

While I will absolutely continue to indulge in a child-free meal on the weekends as an affordable way to have a date night without leaving the house, eating separately should be the exception, not the rule. I want my children to grow up experiencing that same sense of family I had — and a big part of that is family dinners After not eating as a family for a week, I realize just how sacred our time together is.