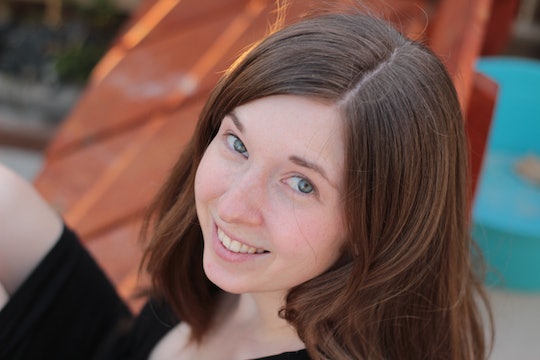 I try my best to be a positive role model for my kids. I don’t want them to learn to berate themselves from me, so I am careful about the way I talk in front of them. I want them to know that they should love themselves and be kind to themselves, as well as others. The adage that you should talk to yourself the way you would talk to a friend is valuable advice. Self-love is important, and it’s something I think we all want our kids to learn.

Self-love is a simple concept, but it becomes complex as we get older, and especially after having children. Your body changes so much throughout pregnancy and then adjusts into a new version of "normal" after each birth (there is no such thing as regaining your pre-baby body, no matter what magazines may tell us). Marketing of every type is designed to leave us feeling as if we are wanting - in our bodies, in our homes, in the way we live our lives.

Of course, it’s an easy lesson to teach, because we love our children to death. We think they are wonderful and worthy and valuable beyond words. When it comes to our actions, however, that’s where it gets a little tricky. We can tell them to practice self-love and pour words of kindness over them 24/7, but if they see us shaming ourselves, how much are our words really worth?

I don’t want my kids to grow up to be overly-critical of themselves. I would hate for them to look in the mirror and not love the person they see. Sure, they will make mistakes, but I want them to know that their mistakes do not define them. I want them to be kind to themselves in spite of their shortcomings. To know they are a work in progress, and give themselves grace when they need it most.

I decided to put myself to the test and keep track of my actions. For one week, I made a pact to not say anything negative about myself in front of my children or my partner. I wanted to show them an example of radical self-love, and what it looks like to talk to yourself the way you would talk to a friend: with kindness, empathy, and support.

I thought it would be an easy challenge for me, to be honest. I thought I was good about being body positive in front of my kids, and cutting myself slack when I needed it. However, I was about to find out that my road to self-love was a lot rockier than I thought.

1. Body Image Is Important For Everyone

I expected it to be easy to stay body positive throughout my week of not talking negatively, and that was fairly true. [I made a pact a long time ago that I'd never talk negatively about my body in front of my children.] I know how important it is to model having a good relationship with my body if I want them to develop a healthy body image as they grow older. Even as I am still in the process of settling into my body’s new normal after having my third child, keep in mind all that my body has done for me: it's given birth three times, has carried me more miles than I can count, it's fed each of my babies. It allows me to dance and run and do yoga. My body gives me so much freedom simply by being healthy and strong. I am fabulously enthralled with it and its capabilities, so throughout the week I made note to speak positively about all the good things.

When I worked out in front of my kids, we talked about how strong our bodies are. When we snuggled, I told them about how each of them used to live inside my belly. When we prepared food, I made a point to talk about how we give our bodies good food to stay healthy. Still, after all my body positivity in front of them, my son made a comment about how he was getting “fat” from eating a single treat. He obviously didn’t understand the meaning of the word, but he did understand the correlation between unhealthy foods and an unhealthy view of himself. Since I never used the word “fat” in front of them, I was curious as to where he heard it. Then I noticed that my husband was the one obsessing over his body. He was the one talking about getting fat, even though it’s the most ridiculous notion I’ve ever heard. He is not your average guy. He runs marathons and works out regularly and eats raw kale salads. (And enjoys them.) He’s in better shape than I ever will be (or even have the desire to be).

I’m sure he doesn’t think much about his off-handed comments about his non-existent love handles, but it's clear that our son does. We may think that body positivity only matters for mothers and daughters, but it matters for everyone. I told my husband it was time to stop the body negativity with himself, and he agreed. Now he talks about the importance of eating healthy foods in front of our kids, but his weight is no longer part of the conversation. It is about energy and health. If we want our kids to grow up with healthy body image then everyone needs to be in on it.

While I thought that body-image quips would make up the bulk of my negative self-talk, that wasn’t necessarily true. I quickly realized that my impulse to talk down to myself was far more common whenever I made mistakes. When I tried to make regular oatmeal in the microwave and it exploded all over the place, I had a knee-jerk reaction call myself an idiot. The same thing happened when I accidentally forgot to bring in my part of the weekly snack for my son’s class.

Immediately, without even thinking about it, I went to call myself "stupid" and berate myself. I caught myself most of the time, but it was eye-opening to see how often I was inclined to talk down to myself for honest mistakes. I thought I was good about giving myself grace when I needed it, but I was clearly wrong.

I realized I needed a serious refresher in how to talk to myself when I make mistakes. My son reminded me that “accidents happen to everyone” while I cleaned up the oatmeal and he could see I was upset with myself. I told him he was right, accidents do happen to everyone, and it’s OK. Mistakes are not cause for shame. Now I am trying to stop the negative thoughts about myself before they start. When I see my son upset when he's trying (and failing) to do something on his own, I calmly remind him that it's alright to be upset, but there is nothing wrong with him. Accidents happen, mistakes happen, and you simply must learn and move on.

One day during my experiment, I went to Target. Obviously, I went in with good intentions and resolve to only buy things I really needed. Then I came out with a cart full of things that seemed desperately necessary in the heat of the moment. It’s the black magic of Target. We all know it to be true. One of my purchases was a random thermal top which I justified buying because “lots of my shirts got puked on last week” (which is true of most weeks) and that somehow made me need a new top.

Of course, when I got home and tried it on, I wasn’t in love with it. I had taken the tags off, so there was no going back now. I had spent too much on an ill-fitting, non-essential top. I kept tugging at it and asking my husband if it looked bad. I said how much I regretted buying it, and how I should be allowed in Target without a chaperone (which, TBH, is still probably true). Even though I wasn’t speaking negatively about myself, I was taking one insignificant poor choice and dragging it around all night. I had made a bad decision, and I needed to move past it rather than obsess over it. It was bedtime, and my son needed me to come snuggle with him, and suddenly I could see how silly it was to make a big deal over my top. It made me realize that I needed to stop letting small stuff control the way I felt about myself.

4. Thoughts Matter As Much As Words

Throughout the week, I did a fairly good job of keeping up my promise to not speak negatively about myself. However, this experiment opened my eyes to how often I have negative thoughts about myself, even when I don’t voice them out loud. I learned that the negative things I say to myself internally have a profound effect, not only on my mood but on the mood of my entire household. If I am telling myself that I am "stupid" or getting angry at myself for making a bad choice, my whole demeanor changes. I'm quicker to anger with my kids and my husband. I sour the whole atmosphere with my negative thoughts. My kids may not hear the words I say to myself, but they certainly can feel them.

I realized that it isn’t enough that I simply don’t say negative things out loud, but that I also make a conscious effort to quiet the negative thoughts I have about myself. When I feel myself getting angry after I've done something wrong, whether it is a poor parenting call or a mess-up during dinner, I think about what I would say to my children in this situation. Would I tell them they are stupid? Of course not! The words I say out loud may matter more, but thoughts still matter. If I truly want to set a good example for my children, I need to work on the opinions I keep about myself on the inside and out.

Was I Setting The Example I Wanted To?

By the end of the week, I'd learned a lot about myself. I was better able to identify the things that triggered my negative self-talk. Even though it was difficult to stop negative thoughts from happening completely, I was much more aware when I was shaming myself. I was able to stop the vicious cycle of negative self-talk and feelings faster than before.

More importantly, however, I learned that self-love was not a destination at which to arrive. It's a constant journey. If I want my kids to love themselves and be kind to themselves, I need to work at it every day. I'll never completely rid myself of negative feelings, but I can show them how to overcome those negative feelings when they arise.