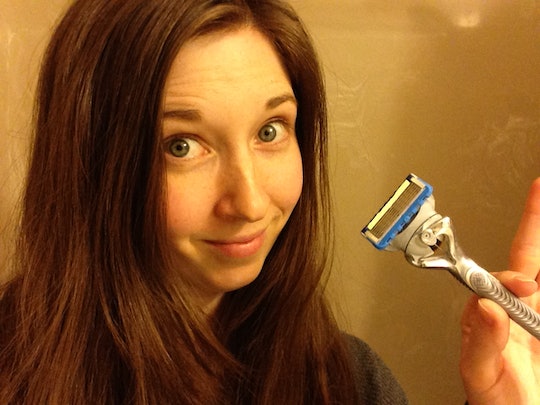 I still remember the first time I shaved my legs. I stole one of my mom’s disposable razors and hid in my bathroom, shaving away my fine, silky hairs with no soap or water while perched precariously on the toilet. Shaving your legs, for me, was a rite of passage, and I felt like a grownup for the very first time. However, it wasn’t long before shaving my legs became a chore, a ritual that I had to do, rather than something I wanted to do.

Once you start, it’s hard (nearly impossible) to stop shaving your legs. As a woman, not shaving your legs is a huge cultural taboo. You are expected to rid yourself of body hair from the first inklings of puberty until the day you die. It’s so culturally ingrained that even the most ardent feminists among us rarely mention it much less fight against it. We simply do it.

Not shaving your legs isn't simply a personal choice, it's a damn statement. It's a bucking of a very public gender norm and can be interpreted in a number of ways - from lazy to uber-feminist bad*ss. I'm probably more the former than the latter, but I have never dared let my leg hairs grow too noticeably since that fateful pre-teen day I first took a razor to them.

I wondered what would happen if I decided to forgo the razor for an entire month. Would I feel empowered in my natural state? Would my husband be totally grossed out by it? Would it affect the way I felt about myself? I was about to find out.

Even in private, I was so aware of the beauty standards I was ignoring. It made me uncomfortable to look at my legs when I was getting dressed, which made me feel like a total feminist fraud.

I started my month-long experiment into the realm of unbridled hairiness with a good shave to start me off at point zero. It had been a few days (because, let’s be honest, who shaves every day during winter? NO ONE.), so I didn’t have to worry about razor burn and the unpleasant not-so-close shave I get when I try to shave every day. I was extra aware of how long it took to do a full-leg shave, and to be honest, I was feeling kind of excited about spending a whole month without the chore of shaving on my to-do list. And yes, I do have to put shaving and showering on my to-do list. My three children not only steal my sanity, they steal my shower time too.

I felt good about myself after shaving. I went running in shorts and enjoyed the smooth feel of my legs against the sheets as I snuggled into bed at night. The thing is, I like having freshly shaved legs. I just don’t like the maintenance it takes to keep them freshly shaved.

I knew he would never admit that it bothered him, but I wondered if it did. Did it make me less sexy to him? How could it not?

By day three there was notable stubble, but shaving stubble is a miserable experience. I was happy to let it slide (like I do most of the time) into a fourth, fifth, even sixth day. If we’re being honest here, I’m a once-a-week shaver in the winter, so this experiment wasn’t really experimental for me yet. I hadn’t even made it to my regular shave day yet. I was feeling totally normal.

Week 2: No Cure For The Itch

Normally I’ll go around seven-nine days without shaving in the winter like it’s no big deal (especially when I forget to pencil in my “shower + shave” on my to-do list). I’m wearing pants most of the time anyway, so who really cares? But once I got into 10-day territory, my feelings started to change. Not my emotional feelings, but my physical feelings. The itching is a real and serious thing. Especially when you are wearing leggings and boots and there is no turning back on your outfit choice because you’re already on a five-hour drive to visit your parents.

I spent the better part of the second week visiting my parents as my legs got progressively hairier at what seemed to be an alarming rate. While the first week may have been nothing out of the ordinary, week two was becoming a struggle for me. I wanted to shave. Not only was I uncomfortable because of the ungodly itching (which, spoiler alert, lasted well into the third week), but I was also starting to feel super self-concious about my furry legs.

My husband, who was unaware of my month-long pledge, kept offering to take the kids so I could take a shower and shave my legs. He always mentioned shaving my legs, because I’m sure at some point this week he noticed that he was curling up next to a woman who was more wookie than wife. He never flat-out told me I should shave my legs, and he never mentioned it when I came out from my showers unshaven, but now that I knew he noticed meant I was feeling way less desirable. I knew he would never admit that it bothered him, but I wondered if it did. Did it make me less sexy to him? How could it not?

I was so conditioned into ridding myself of noticeable body hair that it started to take a toll on me mentally, not only every time I saw it, but every time I thought about it too.

I didn't take much note of it the first time, or the second time, but once it started to become a habitual suggestion, it started to get under my skin a little. I would shave when I was damn well ready. No need to drop hints.

As I entered week three, things started to get real. My legs were super hairy. We had long since passed the realm that could be called "stubble." I was even well past the point where I could feign that I was growing out my leg hair to get waxed. I'd reached that point and then some.

At this point, I started to learn new things about my legs and body hair. It was actually pretty soft once I got past the prickly stage, and the itching started to get better when I was two-thirds of the way through my experiment. I also noticed that my hair grew super unevenly and in all sorts of different directions and it was not quite as dark as I thought it was once it got longer. TMI? Well, too bad. I was on a journey of hairy self-discovery.

Getting better acquainted with my body was sort of neat and made me feel more in tune with my natural self. However, I was feeling more and more uncomfortable with my body as I got hairier. I didn’t think it would be such a big deal for me, especially since I wasn’t walking around town showing off my hairy legs for the world to see. But it was. Even in private, I was so aware of the beauty standards I was ignoring. It made me uncomfortable to look at my legs when I was getting dressed, which made me feel like a total feminist fraud. Why was a little leg hair so uncomfortable to look at when I knew it was totally natural? I was so conditioned into ridding myself of noticeable body hair that it started to take a toll on me mentally, not only every time I saw it, but every time I thought about it too.

I was glad to find that somewhere around the end of week three and beginning of week four, my hair seemed to stop growing, or at least it considerably slowed down. There wasn’t much of a physical difference in the way I looked, but there was a tremendous difference in the way I was feeling about myself. By week four, I wasn’t taking daily showers, even though they took no time at all (since I wasn’t shaving). I removed the chipped nail polish from my toes, and didn’t bother to put any new polish on, even though I had intended to. I didn’t feel like wearing makeup. I didn’t even want to work out (because sweaty, hairy legs are gnarly, OK?).

Even though I know that my worth doesn’t stem from whether or not I shave, that societal expectation is so deeply ingrained that I could not mentally move past it.

Not shaving was affecting my happiness, because I felt like I wasn’t taking care of myself by not shaving. This snowballed into those other areas of my life, which put me in a serious funk. I was less patient with my husband. I was less active and didn't workout. I wasn't making the effort to do my makeup or paint my nails. I didn’t feel like myself when I didn’t shave. I was so used to seeing myself with shaved legs, so accustomed to feeling “normal” by following this grooming standard, that it had become a part of my self-recognized identity.

Had I Embraced My Natural Side?

When I went into this month-long experiment, I was excited. I thought it would be nice to take a break from shaving, and even had hopes that I might find some feminine empowerment by taking back control of my body from this societal beauty standard. It turns out my thoughts were not as evolved as I'd hoped. Over time, not shaving took away my sense of confidence. Even though I know that my worth doesn’t stem from whether or not I shave, that societal expectation is so deeply ingrained that I could not mentally move past it.

But when I looked back over my month of not shaving, I realized that I had not failed as a feminist simply for wanting to shave my legs. I understand that my self-worth is not derived from adhering to any particular set of grooming standards. Instead, I do what works for me. If shaving my legs makes me feel like my best self, then I shouldn’t feel bad for getting in a funk when I’m rocking a 30-day coat. If other women decide that not shaving makes them feel like their most authentic self, more power to them. As for me? I think I’ll go put leg shaving on my to-do list and call it a wrap.