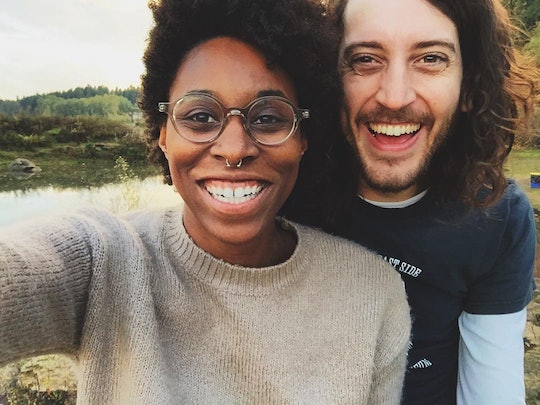 I Stopped Trying To Be Quiet During Sex & Here's What Happened

I've always been cautious about how I sound during sex. I'm afraid of what I might sound like in the heat of the moment and beyond that, I'm unsure of how someone else would feel if I made a lot of noise in the bedroom. This isn't to say that I've always been quiet during sex, because sometimes I can't help my body's reactions, but I've always tried to tone it down. Maybe it's because I've watched a lot of porn and most people sound a bit over the top to me. I never wanted to sound like that, for fear I was being fake, or just overly sensual, which, I'm fully aware, is kind of ridiculous when you think about it: Why would being overly sensual be such a bad thing during sex? Aren't I a feminist? Shouldn't I be proud to own how I'm feeling?

I think too often women are fed a line that says we should be a certain way in the bedroom. We should be sexy, but we should also be strong. We should be sweet, but we should also be dominating. We don’t want to overdo being loud in bed because we don’t want someone to think we’re faking it, but don’t just lay there without making any noise. There is a lot of pressure on women, specifically, to embody so much all at once that I think it can distract from how we might naturally respond within the realms of sex.

I was curious to find out what would happen if I didn't stop silencing myself in fear of what my partner would think. It's not that I've never heard any noise come out of my mouth — that's impossible because I like to have mind-blowing sex — but I also live with multiple people, and my children are also around. Nothing makes me shudder more than thinking about what it would sound like to my children if they were woken up from me being loud. That said, I'm divorced, so I also have plenty of days and nights that my children aren't home. On those days, I wanted to challenge myself to be more open with how I expressed how I felt when I was having sex with my partner.

In the middle of the day on Monday, my partner and I began. We had sex while the kids were off at school and our roommates were out of the house, which to me seemed like an ideal time to practice being louder than usual. For a moment I worried that it would seem too out of character for me, but that thought was instantly replaced by the pleasure I felt.

The first noise I made sounded a bit forced, pitiful even. Hearing myself made me laugh, which ruined the moment and killed any kind of confidence I had that making noise during sex would "work" for me. Then I realized perhaps that was the problem: I was forcing myself make noises instead of just letting my body feel whatever it felt. I thought that if I faked it a little then it would become real. I nixed the idea for the time being, thinking that perhaps I would try it again later.

And we did. Later that night my partner and I again had sex after a few cocktails and it was much easier to get out of my head and relax. The noises that came out of me were natural and easy. If I began to wonder if I was being too loud, I affirmed myself, thinking "girl, you do you!" And I did! When we finished up, I felt a little different. Like I'd let something go. I wasn't sure if I should chalk it up to fact that a few drinks had left me feeling uninhibited or if it was because I'd just moved into a whole new sex experience. Whatever it was, I felt good.

The following day we had sex, again, and I had to actually remind myself that I was doing this experiment and that I needed to make being loud and vocal in the bedroom as much of a priority as everything else. I'd almost forgotten about it, with the regular daily routines and stress of life with two kids, jobs, and everything in between. I was only two days into the experiment and I was already wondering how I would get through a week of being loud in the bedroom. How would I be able to do that without thinking too much about it?

So I pushed it out of my head, and reminded myself to just ease into what was happening around me and to me. Instead of putting so much pressure on making noise, I realized that I just needed to focus on not trying to be quiet. Whatever happened then would just run its course the way it was meant to — and no longer would my body be held back. I didn't really pay too much attention to trying to quiet myself ... until I screamed.

It totally surprised me. I didn't dwell on it for long because I was busy enjoying the moment, but I did take note that I was feeling a larger sense of freedom with how I sounded and how I expressed myself. I wasn't concerned with how it made my partner feel or even my roommates. How I felt mattered to me, and me alone.

I wasn't really expecting any response from my partner, or maybe I just wasn’t that concerned about it. If I had really been concerned about it, I’m afraid I might have been self-conscious or even trying to impress him with how “freeing” I was being. So instead I just never mentioned it. The freedom I felt in the bedroom was mine, and I didn't want to give anyone else an opinion on it, even if that someone was my partner.

Without prompting, he mentioned that I'd noticed that I sounded different, louder, and even more relaxed. I was taken aback, but proud of myself because it was noticeable, the difference, but not in a way that was uncomfortable or obvious. I spent just a little bit of time thinking about how the sounds made him feel, and I realized that the noises must've been positive reinforcements that what he was doing was not just something that I liked, but something that my body deeply enjoyed.

Living in a house full of people has always made me want to be aware of my sound levels. Especially since I have two young children living with me. My roommates did make a comment to our newest roommate about my tendency to be "loud," but they didn't say anything else to make me feel small or ashamed for how I was behaving. Sure, the sex was loud, but their acknowledgment of that fact didn't feel like a back-handed insult. So I shrugged it off completely.

My freedom with how I felt in the bedroom and in the throes of passion had morphed overnight. No longer was I afraid to be loud. Whatever happened, happened, and I was along for the ride. It was as if I had freed myself from something, maybe the concern and worry of presenting myself a certain way, not only for the person I was sleeping with, but also myself.

On Saturday night, I was louder than I had ever been. It wasn't on purpose and I didn't have to make it up. It flowed freely out of me, and it was beautiful. It paired so well with my actions, with the way my body felt, and the way that my partner’s body felt. I felt like what came out of me was complete gratitude, bliss, and love. What I was experiencing was much different than what I had experienced years before. I was excited, knowing that if this was what I got to learn from sex after years of doing it, that I still have so much to learn. What else might be holding me back from experiencing the ultimate?!

It's interesting that something like learning to allow myself to be heard in he bedroom overflowed into other areas of my life. I forget all too often that freeing myself in one area of my life will definitely filter over into other areas as well. I found myself saying what I wanted more, which is surprising. I'm a people pleaser, and very rarely a self-pleaser. Too often my partner will stop me when we are trying to decide on somewhere to eat or somewhere to go and he'll tell me:

Be honest about what you want, do not try to assume what I may want or someone else. Say what you mean.

Before this experiment I felt a little bashful about speaking up for myself in all areas of my life but living through this week made me feel confident, not only when I was having sex, but also when it came to making decisions and speaking up for myself. When a friend asked me what I wanted to do while we hung out, I actually responded with what I wanted to do. Later that night while we had sex, I asked my partner to do what I wanted him to do, and I felt like a badass.

As a black woman, I’m just now learning how to take charge of the power I have. It's a power I never thought I possessed. I haven’t always seen black women being represented as powerful in the media around me. I’ve seen them be strong, or angry, or rise above trying situations, but I've rarely seen black women portrayed as powerful. My mom, however, has always been powerful to me. And even though I had her to look up to, I never saw myself really owning that power.

Day seven totally changed that for me. As a black woman I've often been taught by society that I should shrink myself, take up as little space as possible, and make sure everyone else around me remained comfortable. I've done this for as long as I can remember, and I can tell you first-hand that it does not feel powerful. It is powerless. This week put that all into perspective. On day seven, I don’t think I've ever felt more like the powerful, empowering black woman that I am than I did when having sex with my partner. In the bedroom I was free, and there is nothing more powerful than allowing yourself to be whatever and whoever you are right then and there. On day seven, I gave myself that freedom. I was a force of nature and I owned my sexuality. And it felt so sweet.

What Had I Learned?

This week taught me how much my self-consciousness affects my life. I need to give myself the room to do what feels right for me more often, not just in the bedroom but in every room. I often forget to take care of myself, and to give myself the kindness I'd give to someone else. I started this week thinking that I'd be learning so much about myself in the bedroom, but what I got was a real-life look at how who I am in the bedroom is exactly who I am IRL. When I let go of all the expectations over who I was and what I was and how I should sound and whether or not I should do this or do that, I just felt even more connected to myself. I was amazed that what already felt like brilliant sex, became even more amazing.

I discovered parts of myself I had never known, and I freed parts of me that I'd locked away. I'm pretty sure I'll never go back to being in the bedroom.