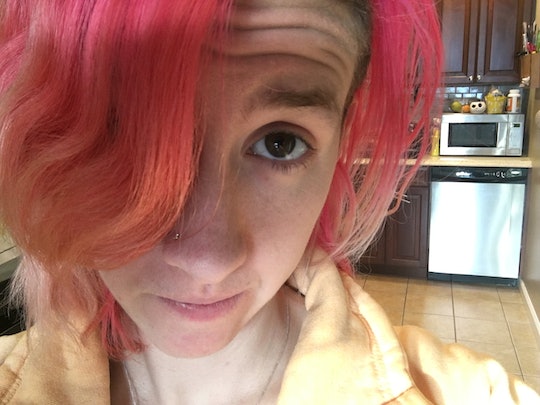 I Stopped Waxing My Eyebrows For A Month & Here's What Happened

I don’t remember how old I was when I became aware of my eyebrows. I mean, I always knew I had eyebrows, and while I often forgot what they were called — when I was very little I referred to them as my “eyelashes" — they were always there. They were just a part of who I was. But sometime in middle, around the age of 12 or 13, I became hyperaware of their presence. They were wiry and wild, big and bushy, and because it looked like there were two not-so-small caterpillars obscuring my gaze. Two dark, brown, caterpillars. They were thick, unkempt, and so much bolder than I was ready to handle. And they still are! My eyebrows go wild whenever I don't wax.

The premise was simple: go an entire month without waxing my eyebrows. No trimming. No tweezing. No plucking, and no maintenance of any kind aside from a brow brush. And while I readily accepted this experiment when it came my way, had I given it a second thought I may have reconsidered, because it fell during the holidays, New Year’s, a huge family vacation, and my vow renewal ceremony with my husband. (No big deal.)

So why "take it on?" Truthfully, I'm not sure. I'd love to say I wanted to learn something about myself or prove something to myself , but that wasn't the case — at least not here. I simply wanted to embark on this experiment to see if I could, to see if I could "live on the edge," and live outside my comfort zone.

I’ll be honest: I don’t have much to say about week one. I mean, I started the week out with a wax. (I had to get my brows in order before I could let them go!) But once they were done it was an easy, no-fuss week. And my brows looked fab! And aside from my from my usual post-wax breakout, I didn’t give much thought to them or the experiment.

That said, I was self-conscious for a day or two — thanks to the small pimples scattered across my bridge and over each eye — but my confidence returned as soon as they cleared up. All-in-all, things couldn’t have been better. There was no upkeep involved. I didn't have to "do" anything (just roll out of bed and brush my hair), and I couldn’t have felt better. Week one couldn't have been better.

This is going to sound so boring, but week two wasn’t much different than week one. I mean, I didn’t have to deal with a pre-pubescent breakout or super shiny forehead, so in essence week two was better, but the tail-end of week one and the entirety of week two felt the same. I was confident and secure and, dare I say, sexy.

Instead, I was able to smile a bit wider and speak a bit louder. I laughed with ease, I didn’t have to hide behind my shoulder-length locks, and I was truly able to put my best foot — and my best face — forward. (My hair grows in slow which is good for me but not so good for this article.) More importantly, I was able to feel good about myself since I felt good about the way I looked. (I know that sounds vain, but it's the truth.)

Ah, now this is when things started to get hairy. (Pun totally intended.) Sometime around week three (maybe day 20 or 21?), my eyebrows went from clean to crazy. Little hairs jutted out near the bridge of my nose, and the edge of my eyebrows were no longer smooth. I felt like my brows looked like a weed-filled meadow on a warm summer's day. They were growing in thick and they felt like way too much for my small face and features to handle. In all, it was way too much for me. And so, in traditional Kim fashion, I became super self conscious. I wore my hair down and kept my knit hat on (even inside), and I made sure to put on makeup. (My thought was the eyeliner, eyeshadow, and mascara would pull attention to my gaze and not my messed-up brows.) I felt my brows were a mess. They were wiry and shapeless. They were bold and overpowering. And they felt like they were the antithesis of femininity. They felt like the antithesis of sexy.

Did my vain attempts to hide my brows work? Maybe, maybe not, but I’ll never know because no one — and I mean no one — told me my eyebrows were unsightly. No one ever said I looked ugly or even masculine. And I never expected them to, really, but I assumed (as I have all my life) others were thinking it because it was what I was thinking. Those bushy brows were the only thing I saw when I looked in the mirror, or even at photos with my husband and my beautiful baby girl, and surely others saw them too. But because of the total lack thereof of comments, I realized that everything I'd learned about beauty, especially about my own beauty, had been learned in middle school and high school. My definitions on what was beautiful and what was very clearly not had been molded into existence from mass media, what I saw on the TV, and what I saw around me. And in the '90s, Lucy Liu and high arches were in, waxing was womanly, and full brows were a fashion faux pas.

Ugh. Week four. This was the week I renewed my wedding vows, took my daughter to Disney World for the first time, and the week I ran my first Dopey Challenge (four races — a 5k, 10k, half marathon, and full marathon — in four days). It should have been a good week — the best week! — and while it was, I look at the pictures and I only see one thing: my goddamn eyebrows. I see my father's face — he gave me these bushy 'brows — and I see a woman who doesn't want to take care of herself. A woman who doesn't believe she should take care of herself. And I see a mess: a complete and utter mess.

At the end of the fourth week, what I found wasn’t that I love (or hate) my eyebrows, it was that I have a love/hate relationship with myself. Waxing helps make me feel better because it helps me feel "normal," (when I meet conventional beauty standards), but I was still vulnerable and self-conscious. I was anxious and embarrassed and insecure. They say you should "fake it until you make it," and throughout week one and week two, I did. I believed because my brows were in order my life was in order. I dressed better, I felt better (or so I thought), and I was better — I was feminine and just "one of the girls."

I believed I was beautiful.

But the truth came out in week three when the hair grew out, when the bandanas and hats and hoods came out, when I hid behind layers to hide my ever-growing brows. That me — the hidden one — is the real me. I don't like putting myself out there or getting dolled up. I don't like being the center of attention. And I don't like getting, well, any attention. So I hide. I use clothes to hide. I use hats to hide, and I use my computer to hide. After "getting waxed," I try to be different. I try to do what other women do — I try to be what society suggests I should be — but that me, that "pretty me," isn't me. And while I wish I could say this month ended in some ah-ha moment, it didn't. It simply ended the way it began: with an $8 wax job, a tip, and 10 days of psuedo-sexiness.

That said, I did learn something: Taking charge of your confidence is sexy. Taking charge of your identity is sexy. And taking control of your life is sexy. Whether I believe I am sexy is still a point of contention, but big brows or not, I learned that I am most comfortable in my own in skin: in ponytails and hoodies and donning a little bit of lip gloss. I learned that I am most comfortable when I stop thinking, stop caring, and stop worrying about who I should be (or how I should look). And I am the best version of me when I do what makes me happy, not what makes me feminine or perfect or "normal."