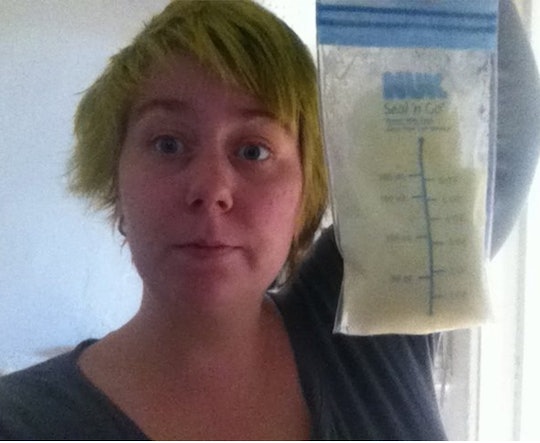 I Suffered From Engorgement & This Is What It Was Like

I knew, long before I gave birth to my son, that I wanted to breastfeed any children I might have. During my pregnancy I was so sick that I mostly stayed in bed and watched Netflix, and I watched that Breastmilk documentary at least four times. I read about breastfeeding, and I felt like I was mostly prepared, or as prepared as a person could be for the ordeal of feeding another human being with your own body. I was fairly confident about the whole thing, but in the back of my head there was this tiny kernel of fear. What if the thing that it seems almost all breastfeeding parents in America fear happened to me? What if I suffered from the dreaded low supply? Well, as it turns out, the exact opposite was true.

I had so much milk that my body couldn’t get it out fast enough, and ultimately I suffered from engorgement and regular blocked ducts for several months. While plenty of people told me that having too much milk was a “good problem to have,” and I was happy to have plenty of milk for my growing baby, the experience was also extremely painful, deeply emotional, incredibly inconvenient, and often downright scary.

My first indication that plenty of milk was in my future came when I was only 25 weeks pregnant. I was just on the verge of my third trimester, but one night in the shower, my breasts actually started leaking a little. I didn’t know what to think, so of course I spent most of the night worrying and doing various google searches on my phone. Between Google and my excellent midwife, I more or less got the same answer: It’s nothing to worry about, but it could mean that you’ll have a very good supply.

After my son was born, we both had to learn how to make breastfeeding work for us. It was not the simple and natural miracle I’d hoped it would be, and for the first two days I was utterly terrified that we would never get it right. I was in the hospital recovering from a C-section, and while being there meant that I had access to around the clock lactation consultants, it also meant that I was under a lot of pressure. When the doctors realized that my son had jaundice and had lost slightly more weight than expected (though still within the realm of normal) they started suggesting formula supplementation. I stood my ground, and was told that I should start pumping immediately if I didn’t want to use formula. And so I pumped colostrum, the mostly transparent liquid that breasts expel before the mature milk comes in. The nurse kindly warned me not to expect much, she said it might not even be enough to be visible in the container.

That first pumping session, I pumped about two ounces. When the nurse came in soon after, she was shocked. She said she’d never seen someone pump that much colostrum, not ever. After that, my milk came in fast and strong.

I was initially ecstatic to have so much milk with which to feed my baby. After a pretty crappy labor experience, it felt like my body was finally doing something right, and I felt excited and proud about that. My smugness didn’t last long though, because no matter what I did, there was more milk than my baby could ever drink. I was constantly leaking milk, and it was summertime so it was sticky and gross, and unless I had just fed my kid, my breasts were usually engorged, rock hard, and painful. It completely took over my life.

On more than one occasion I found myself in our shower, crying, and hand-expressing breast milk down the drain.

At six weeks old, my baby surprised everyone by sleeping through the night on his own accord. My wife and I felt extremely lucky, or rather, my wife did. The first time he slept through the night, I woke up four hours after we put him down in truly agonizing pain, with the sheets around me all completely soaked. I came so close to waking him up to feed him just so I could get some relief. But he was growing well, and I wanted to let him sleep for as long as he wanted to. I tried my best to get back to sleep, but I ended up having to pump in the middle of the night just to relieve the pain enough to be able to doze off.

Everyone told me my body would adjust, but it seemed to only be able to adjust to making more milk, never to making less. This meant that my breasts were always in some level of pain, and closer to feeding times it would spike and become unbearable. When the baby couldn’t drink anymore, I would pump, but I totally loathed pumping and never felt like cleaning the damn thing. On more than one occasion I found myself in our shower, crying, and hand-expressing breast milk down the drain.

From the constant engorgement, I had regular blocked milk ducts, which were like little balls of pain that burned like fire. But aside from the blocked ducts being uncomfortable, they were also scary, because I knew they could lead to the dreaded mastitis. So I spent a ridiculous amount of time both checking my boobs for clogs in panic, and looking up “ways to clear clogged ducts” on the Internet. If there is a weird duct clearing trick you have heard of, I have probably tried it. Hot and cold compresses? Tried it. Nursing in different positions? Tried it. Cabbage leaves? Tried it. Crouching on all fours while massaging the clogged area with a vibrator? You bet I tried it. Sometimes these tricks worked and sometimes they didn’t. I had one clog that lasted for over two months, and then I convinced myself that it was really a lump and I probably had breast cancer. I made two gynecologists check my boobs at my next follow-up exam, and they assured me that it was just a weird nursing lump.

Everyone kept telling me it would get better soon, but it just kept getting worse.

Being so engorged made it difficult to sleep, and it made it difficult to leave the house. My breasts routinely became too full in short periods of time, and leaked so much that I soaked through breast pads, leaving them soggy underneath my shirt. My let-down reflex was so strong that my baby gagged and sputtered trying to nurse, and after awhile he stopped trying to latch on at all and just lazily let the milk squirt into his mouth. Everyone kept telling me it would get better soon, but it just kept getting worse. Pumping to relieve the pain completely backfired, and caused my breasts to produce even more milk.

It made breastfeeding, which was something that I honestly loved (and continue to love), a stressful and anxiety-inducing part of my life. It added to the many layers of worry and confusion during a time when I should have been peacefully healing. And it reinforced for me that, despite all of the “trust your body” messages you get around pregnancy and birth, bodies are in fact not perfect and do not always do what is best.

So how did I make it through? Well, after countless miserable nights, endless soaked sheets, and a truly extraordinary amount of tears and late night googling, I discovered block feeding, which means that you restrict baby to feeding on just one breast for a three-hour (or longer) period before offering another, and in desperation I gave it the old college try. Since your breasts stay fuller for longer, block feeding signals to the body to slow down its supply. Within one day, my oversupply problem was waning, and with the massive quantities of milk went the painful engorgement and all of its headaches.

Suffering through engorgement and oversupply was extremely trying and awful, but I’m glad that I persisted. Nowadays my baby and I enjoy a breastfeeding relationship that is almost all positive, and never involves me crying in the shower.