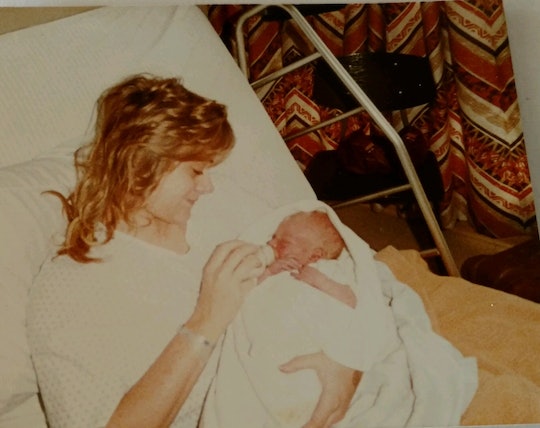 I Breastfed. My Mom Didn't. We're Both Awesome.

It was pitch-black at 2 a.m., and my newborn baby girl was starting to stir in her bassinet. I’d fallen asleep exactly 15 minutes before. Those 15 minutes did more harm than good to my psyche: I hated that she was awake, then I hated myself for feeling that way.

She started to mewl, hungrily looking around for her food source. When my milk let down with a jolt of pain, I started to cry. My sore boobs throbbed. It was too much, and I told my husband I couldn’t breastfeed anymore. My goal had been to breastfeed for a year, but how could I possibly last that long? “Either pop her on the boob or I’m making a bottle," he grumbled into his pillow. "She has to eat.”

I scooped up all seven pounds of this needy little girl and headed into the nursery to try and feed her. But as I rocked in the dark, I couldn’t bring myself to latch her on. We both just sat there crying until the door cracked open, and in walked my nursing superhero — my mother. My mom, who had formula-fed me, didn’t know the first thing about breastfeeding, other than it involved "ta-tas" (as she called them) and baby mouths. But she knew a thing or two about providing emotional support.

She helped me into the guest room, and I sat down on the bed next to her, letting my tears flow. She spoke softly and calmly and told me, “Shh, it’s ok. You can do this. You wanted to do this. So let’s do it.”

She grabbed my jug of ice water with the bendy straw and told me to bite down and suck through the straw as my daughter latched on. She couldn’t tell me about positioning my baby’s head or pointing my nipple toward the roof of her mouth, but she could empathize with me and help me power through the pain.

I managed to get my baby latched, and she drank like a greedy little piglet. My shoulders relaxed, and after just a few seconds the intense pain subsided. "I knew you could do it all along," my mother said.

We got through that feeding, and my mom held my daughter as she drifted back to sleep. She told me we’d call a lactation consultant in the morning, but for now I just needed rest. I trudged back to my room and slept for another four hours. My mom took care of her baby by taking care of mine.

I got an appointment the next day with a lactation consultant who checked the baby’s latch and told me everything looked great. I told my mom what the consultant said when I got home, but my mom was more familiar with my pain tolerance more than this professional. She knew if I said it hurt to breastfeed, it hurt to breastfeed. The lactation consultant said she'd take another look because there might be an issue with a tongue tie, which makes it harder for babies to latch on properly, but she couldn’t be sure.

Meanwhile, my formula-feeding mother became my de facto lactation consultant. She suggested I give the most injured boob a rest for a while, so I just pumped on that side to keep my supply up. I powered through, and my daughter was exclusively breastfed for almost two years. Just before her second birthday, she was officially diagnosed with a tongue tie, but it was too late. My mom had guided me through the rough patches of nursing better than the pros.

Given the myriad, well-documented health benefits of breastfeeding, I've always wondered why my mother didn't breastfeed me as a baby. When I asked her, she told me it had never occurred to her to breastfeed, because it just wasn't as popular back then. By the time my brother was born, she had learned more about breastfeeding and she wanted to breastfeed him, but he was born at 28 weeks and was confined to an incubator. She didn't have anyone to help her pump or even try to bring in a supply for him.

Unlike my mother, however, when I found out I was pregnant with my first child, I immediately decided to breastfeed. Let me be clear: unlike some breastfeeding moms, I don't think formula is poison. I was fed nothing but formula as an infant, and I managed to develop into a pretty fabulous human specimen. It’s a food that is designed for babies, and it’s saved the lives of many a child in this world.

Breastfeeding helped me feel like I wasn’t broken. Seeing that my body was capable of sustaining human life outside the womb became essential for my healing process.

But I wanted to breastfeed. My body felt foreign and ugly after a hard labor and delivery. I hated the flabby, stretch mark-ridden mess that I was left with, but breastfeeding helped me feel like I wasn’t broken. Seeing that my body was capable of sustaining a human life outside the womb became essential for my healing.

That doesn't mean, however, that I think I was deprived of some crucial life force as a result of being formula-fed. Despite what all the sanctimommies on the internet might say about how mothers who formula-feed their babies are lazy selfish women who will never truly bond with their children, the thing is, my mom and I did bond.

Since I was a kid, my mom has regaled me with stories about her pregnancy and the love she had for me when I was a little alien zygote. To hear her tell it, she was this glowing earth goddess who enjoyed every moment of her pregnancy with me. And once I was born, she kept nurturing that bond as she fed me.

My mother might not have fed me from her breast, but I was always physically close to her heart.

She won’t come out and say it, but I have a feeling I was a real a**hole of a baby. All of her stories about me as an infant are how I took forever to eat. Reportedly, bottle feeding is much more efficient than breastfeeding because babies don’t have to work as hard to pull the milk from the bottle. Apparently, I took laziness to a whole new level. My mom said I would take an hour or more to suck down a few ounces of formula. So by the time she prepped the bottle, fed it to me, burped me and got my diaper changed, it was time to eat again. (This doesn’t seem out of character for me: I still love to eat 'round the clock, and if I could get a job professionally binge-watching Netflix from my bed I would be insanely good at it. I am most likely part sloth.)

But because of this extensive process, my mother was constantly with me. She could’ve taught me to hold my own bottle, but she said she just loved to hold me. She might not have fed me from her breast, but I was always physically close to her heart.

I bonded with my daughter because my mother taught me to actively nurture my children. Breastfeeding is only one part of our story. And I owe a lot of that to my mom.

The bond between a mother and a baby isn’t exclusive to the physical closeness of breastfeeding. If all it took was a physical connection in infancy to form a lifelong bond, then every baby who was ever breastfed would be besties with their mother. I know plenty of adults who were breastfed who don’t even speak to their mothers. I talk to mine every day. Myth: busted.