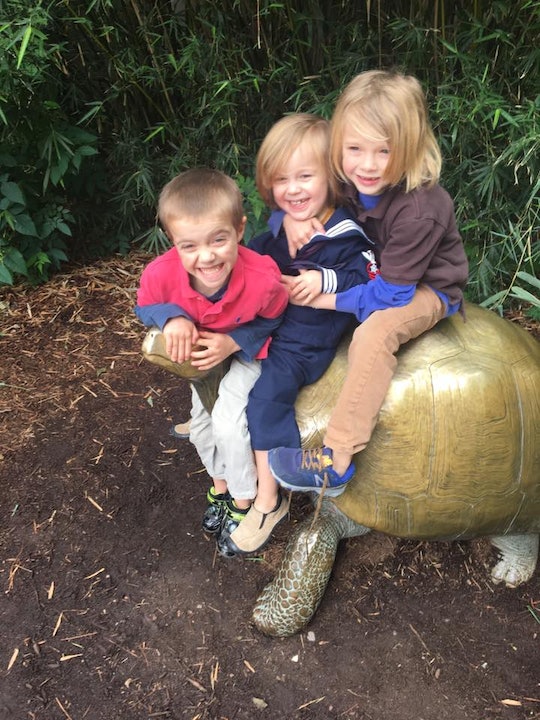 I Tandem Breastfed My Kids For 5 Years

When my oldest son Blaise was 15 months old, he was still nursing at night and throughout the day. If he was bored, he’d toddle over to me, hold up his hand, and open and close his fist to signify that he wanted to eat. He also had multiple food allergies and was tiny, so breast milk helped give him much-needed calories.

When I got pregnant with my second child, I knew I wasn’t going to stop nursing Blaise. I nursed him throughout my pregnancy, but it wasn't easy. I very quickly developed nipple sensitivity and agitation, so Blaise had to night wean: instead of me nursing him to sleep, my husband put him to sleep instead, which made him cry for two weeks straight. I also developed hyperemesis gravidarum, and was so sick I slept in the guest room. But I still found time to nurse Blaise during the day. Little did I know that was the beginning of tandem nursing my children for 5 years straight.

After I gave birth to my son August, Blaise was thrilled when my milk came in. I'd hold my fragile newborn in a cradle hold in one arm, and on the other side, Blaise would cuddle against me and latch in whatever way he could. He wanted to nurse when the baby did, and I had to keep track of who had nursed on which boob last: the newborn needed the most milk, so in my case, he needed the one that the big kid had nursed on last.

I've heard some women say it made them feel like cows.

Some people who tandem nurse just assign a boob to a kid; I chose to alternate, so my supply wasn't lopsided. I had to pull my entire shirt up, and my whole undershirt down, unclipping both sides of my bra and basically baring my whole chest, which was a pain. But the dual sucking didn't feel weird, even though I've heard some women say it made them feel like cows.

About a month after August was born, the novelty of tandem nursing wore off for Blaise, and he started nursing only a few times a day, then dropped down to maybe once a day. But I kept nursing two kids until Blaise was 3 years old, when I discovered that much to my surprise, I was pregnant with my third son.

This time, I was not about to tandem nurse and be pregnant — I knew I was prone to getting very sick during pregnancy, so I needed to minimize my energy output. I sat on the couch, nursed Blaise for one last time, and that was that. Whenever he asked to do it again, I simply told him “no."

In the meantime, it was time for August to nightwean. My nipples were getting sensitive again: it felt weird to nurse, and it made me feel like I wanted to toss the baby across the room. We did it the same way we did before: my husband took him into another room, while I slept alone. If he was particularly distressed, he might bring him in for a quick sip and then take him out again. It took another two weeks for him to night wean. Because of a side effect from one of my medications, domparidone, my milk flowed copiously, so August nursed and nursed and nursed.

Tandem nursing is hard work. It’s tiring, and you have to eat a lot to keep your supply up for two kids. But I miss it.

Much like Blaise before him, August was thrilled when my milk came in after my youngest son, Sunny, was born. He was two years old. We settled into the same position we had when he was a newborn: baby Sunny in a cradle hold, August latched in a cuddle hold. Because I knew that having a sibling was a huge transition, I was worried about August, who was and remains very needy. So I let him nurse as much as he wanted. Once, at a restaurant, I nursed Sunny, then handed him off to my husband and latched August on. I think that might've scared the other patrons.

August needed to nurse. While Blaise had used it to satisfy his oral fixation, August needed it as a sense of reassurance. I found myself nursing him in public quite often, even when Sunny was uninterested. August didn’t nurse when Sunny was in a wrap, but if I was sitting and nursing, he was right there next to his brother, wanting a piece of the action. He nursed until he was about 4 years old.

It was strange, after all that time, to nurse only one child. Sunny nurses only once a day now: at night, before he goes to sleep. I don’t wear nursing bras. I don’t whip out my boobs in public. And I no longer freak people out by nursing two kids at the same time.

Tandem nursing is hard work. It’s tiring, and you have to eat a lot to keep your supply up for two kids. But I miss it. It was difficult at times to sort out which boob was whose when, or telling the older one he wasn't allowed to nurse. But tandeming was worth any trouble it caused, because I was glad I was able to fulfill my sons' emotional and nutritional needs.