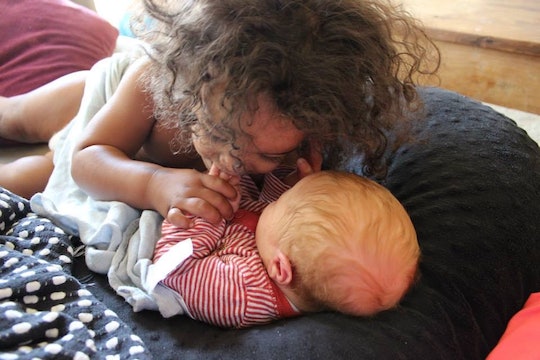 Early one morning while getting our oldest ready for school, I dug out the very last pregnancy test I had bought seven or eight months earlier and was amazed (but obviously not shocked) to see those double lines pop up. After the initial freak-out, I realized I didn’t necessarily have to wean my breast-obsessed 1-year-old: I could simply tandem breastfeed.

I met with my midwife and she assured me that I could continue nursing Caspian while I was pregnant and even after when the baby was born. That mom guilt was already starting to creep in as I thought about all the ways I was going to be slighting Caspian because of the quick turn-around time in babies. I knew that the coming months were going to have me sick, tired, and stressed out as I figured out how to navigate the kindergarten yard we were now in, managing a toddler and making a baby. I thought that if we could continue on breastfeeding, I could make up some of those moments with Caspian.

Plus, I figured if I never stopped nursing I wouldn’t have to deal with the bleeding, cracked and sore nipples that you normally do during those first few weeks. (Although I was wrong about that one.)

During my pregnancy, it was pretty easy to keep this up. I liked the built-in nursing breaks that let me put my feet up and relax. I loved being able to just lay there with my toddler and snuggle — it’s a time I wouldn’t trade for anything. It wasn’t until Echo was born that the trouble started.

Literally, moments after delivery when I brought Echo to me to nurse, Caspian decided he wanted to as well. But the “rule” we had been talking about over the last nine months was that baby would always get to go first, especially during those early weeks. So what did we do?

We bribed him with popsicles. Anytime he wanted to nurse before the baby got a chance to, someone would grab Caspian an “olo” and he would sit right on top of me dripping the sweet juices all over my chest while his brother ate.

It was important after Echo was first born to establish our own breastfeeding relationship first (similar to how it’s recommended that you don’t pump for the first few weeks). We wanted to make sure that Echo was getting all of that good hind milk that he needed, and Caspian wasn’t taking the bulk as the more efficient sucker.

After a few weeks, Echo and I had established our own breastfeeding schedule and so that meant I could start allowing Caspian to nurse with us instead of just getting Echo’s last little drops when he finished. But Caspian was a big kid and he would want to kick Echo out his spot as he tried to assume his regular cradled position. When he couldn’t twiddle at the other nipple while he ate, he’d take to just kind of pushing or kicking Echo in the head.

By the end of each day, touched out wouldn’t even be able to touch (pun intended) how I felt. The baby nursed on demand and the toddler nursed out of comfort, so I was basically sitting and nursing all day. I was electrified by the end. My whole body alive and buzzing with the pulls and the twiddling and the sucking.

My days were spent nursing all day. I’d nurse Echo and put him down for a nap, but if I sat down at all for any reason Caspian would toddle over and we’d do the same thing for him. Neither one could really be put down for any sort of nap without first being nursed to sleep. The logistics of keeping up with two kids under 2 is enough to make any mom crazy. But adding tandem breastfeeding was an added stressor I maybe should have done without?

Question mark there, because I don’t know if I would do it again. Echo ended up weaning himself by 14 months which worked out because at 11 months in I found myself pregnant again. Caspian continued to nurse until we were two months out from the arrival of baby number 4.

Though our days of tandem feeding were long and exhausting, there were still always spurts of magic that I’ll always hold onto. There is nothing quite like the weight of a baby on your chest. Passed out, milk drunk with their sweet breath. Add another one to it and it's kind of incredible. Caspian was very tactile and would love to caress Echo’s head as he fell asleep or hold his hand while they both nodded off.

It didn't last forever, but for a time, there we were, all together at once.

More Like This
20 Stocking Stuffers For Kids Under $20
Can You Burp A Baby Too Hard? A Pediatrician Shares Tips For Gassy Tummies
12 Holiday Gifts From Small Businesses To Delight & Inspire Kids
Festive Mommy & Me Holiday Nail Ideas To Try