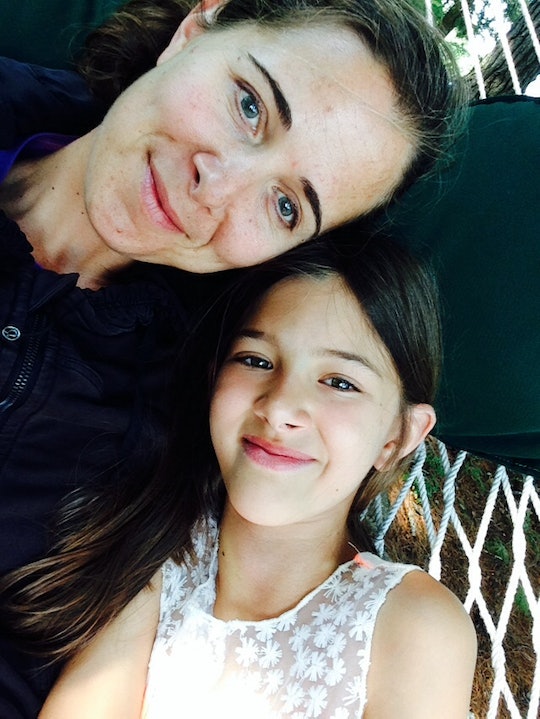 Why I Taught My Daughter About My Menstrual Cup

My daughter is 11 years old, just on the cusp of puberty. Menstruation is definitely on her mind. “I don’t want to grow up and get my period!” she’ll exclaim fearfully, usually at bedtime when we’re checking in about her day. Then she’ll ask me a series of questions about what menstruation is, and how it works. I'm not sure why she's so anxious about it: Perhaps it’s simply fear of the unknown that keeps her tied up in knots, or maybe she feels a sense of helplessness over what will soon happen to her body.

Even though my daughter hasn't gotten her period yet, I try to talk to her openly about menstruation. Through the power of knowledge, hopefully she feels like she can retain some control over her own body. That's basically part and parcel with my larger parenting objective: I try to teach my kids the bare bones about what will happen to their bodies during puberty early enough that a sort of aqueduct forms, through which further discussion might pass at a later date.

I first learned about the menstrual cup on Facebook, where a friend posted an article decrying the chemicals used in tampon production. I groaned, but I scrolled down anyway, just out of sheer curiosity. As a runner and a parent who has given birth to three children, I’d already spent decades searching for the perfect tampon that wouldn’t fall out, leak during a half-marathon, or make me feel like I’d been corked with a wooden pogo stick. If I couldn’t use tampons anymore, then what, exactly, could I use?

In the comments section, my friend suggested one possible alternative: “Menstrual cup!” she wrote, next to a winking emoji.

I'd thought I was just the type of person to eschew traditional menstruation management in favor of something holistic and, frankly, a little weird.

What? I stopped scrolling. I'd thought I was just the type of person to eschew traditional menstruation management in favor of something holistic and, frankly, a little weird. After all, I went to school with a bunch of hippies in Vermont, where my roommates and I had adopted a pot-bellied pig and spent our snowed-in afternoons knitting hats. But somehow, I had never heard of a menstrual cup before.

Out of curiosity, I ordered a menstrual cup off Amazon one night before dinner. A few weeks later, it was showtime. I read the manufacturer’s instructions along with an article my sister had sent me about menstrual cup hacks. Once I spent a few minutes practicing how to fold, insert, and twist the cup, the rest was easy. I found that my menstrual cup was better than my best tampon: I could ignore it for 12 hours at a time, and it was totally comfortable. It was revolutionary, even genius.

Within days, I began proselytizing about the glory of the menstrual cup to anyone who would listen. None of my friends had ever used a cup before, and few had even heard of them. I assumed it was because most people were afraid to use them, as they require the user to be comfortable enough with their own body to insert their fingers into their vagina. But I wanted to make it clear that menstrual cups weren't gross, and that the insertion process was no big deal.

After a few weeks, I had converted three women into menstrual cup devotees, including my younger sister. I figured that my own daughter should also learn about them eventually, even if she might not be ready to use them herself. So why not tell her now?

One afternoon while I was using the menstrual cup, I poured its contents into the toilet without flushing and hopped into the shower just before my kids got home from school. I had a plan in mind.

One afternoon while I was using the menstrual cup, I poured its contents into the toilet without flushing and hopped into the shower just before my kids got home from school. I had a plan in mind: I didn't necessarily want to shock my daughter, but if she were to walk into the bathroom that day and stumble upon the cup and its contents, we could talk about it if she wanted to.

Sure enough, my daughter walked in, peered into the toilet bowl, and gasped.

“It fits in there?” she asked, pointing at me, astonished.

“Oh, that. I got my period today,” I casually said, “and I started using this awesome thing.” I toweled off, picked up the cup, and explained how it worked.

“It fits in there?” she asked, pointing at me, astonished.

That day, my daughter asked me a lot of questions about the menstrual cup. I think it was helpful for her to learn more about it, and I think (or at least, I hope) it alleviated some of her fears about menstruation.

Once I made the choice to switch to a menstrual cup, I actually felt more powerful and in control over my own body. Ultimately, I want my daughter to feel the same way about herself. I don’t want her to actually use a menstrual cup before she’s ready, but if she can trust me to talk to her honestly about my own experience, she will also trust me when we're talking about hers. In this way, I can lead her to a place where she feels well-informed and confident in her ability to make choices in all areas of her life. So whenever the time comes for my daughter to get her first period, I hope I’ve made it easier for her to pick up the cup and use it.