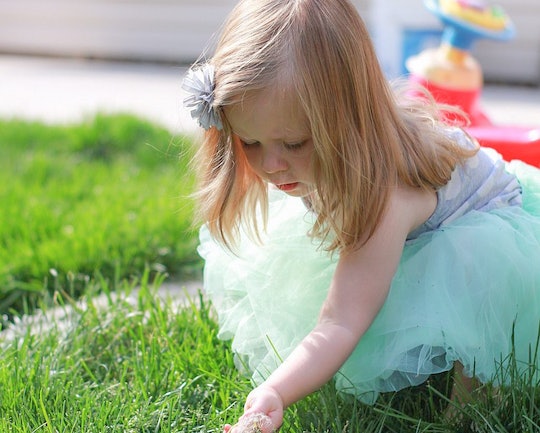 I Tell My Daughter She's Beautiful For One Very Important Reason

My daughter is incredibly beautiful, and people tell her so all the time. It doesn’t make me angry or want to rage against the patriarchy when people compliment her appearance, because I know that her looks are not what matter most about her. I tell her she is beautiful too, because you know what? She is. I think my daughter needs to know she’s beautiful in addition to knowing she is smart and kind and brave, because I want to raise her up in as many ways as possible.

There is nothing shameful about being or feeling beautiful, and I truly don’t believe there's anything wrong with calling out beauty when we see it. “Beautiful” is not a bad word, or is it an insult. “Beautiful” is not a word that will harm my daughter's self-esteem or ruin her self-worth. It’s a positive attribute, and one that I want my daughter to embrace. It will bolster the way she views herself — becoming a part, not the whole, of her identity.

The fact that I tell my daughter she is beautiful does not mean I can't or won't tell her that she's also intelligent and capable and interesting in ways that have nothing to do with her looks. There seems to be this notion that you cannot call a girl “beautiful” without insinuating that this is the only attribute you value about her. That notion is dated and, let’s be honest, wrong.

I know I have more important attributes than my looks, and you know what? My daughter will know it too.

If that were true, my husband is only staying with me for my looks, because he calls me beautiful all the time. If looks are enough for him to stay with me through everything we’ve been through, I must be a goddamn supermodel. Hell, even if I was Gisele Bündchen, looks alone could not make us survive the mess that comes with three kids and seven years of marriage. The fact that my husband (or anyone else for that matter) calls me beautiful does not devalue my other traits. I know I have more important attributes than my looks, and you know what? My daughter will know it too.

I want her to know with certainty that she is beautiful so that she has the confidence to ignore those messages and to focus on other things more important and dear to her than her beauty.

Yes, there are cultural messages that my daughter will hear throughout her life about needing to be pretty or thin or traditionally “beautiful,” according to some archaic patriarchal standards. She'll experience tons of double standards because the way she looks and the fact that she is a woman will subject to scrutiny her brothers’ will sidestep entirely. And to be honest, as her mom, I'm not OK with that. I'm not playing into antiquated societal stereotypes or uplifting the message that women are only "good for one thing" by telling her she is beautiful. Rather, I want her to know with certainty that she is beautiful so that she has the confidence to ignore those messages and to focus on other things more important and dear to her than her beauty.

I want her to know who she is and what she is, so that when the time comes for someone else to tell her, she's not shocked or surprised or mesmerized by weight of the words. I want her to know she's beautiful now, because there are so many other things that matter beyond that.

If I want her self-worth should be impenetrable, I need to tell her she is beautiful now, before the world starts to make her question herself. If I want her to now that beauty is just a part, not the sum, of who she is, I need to arm her with that knowledge now, before the world teaches her to only see one thing. It's my job as her parent to help instill the confidence she'll one day need to face a world that will try to take it from her. I tell her she is beautiful for the same reason I tell her she is brave and wild and smart and funny and all the other wonderful things I don’t ever want her to second-guess about. I tell her because I want her to know, with unshakable faith, that she is always more than what the world will teach her she is.