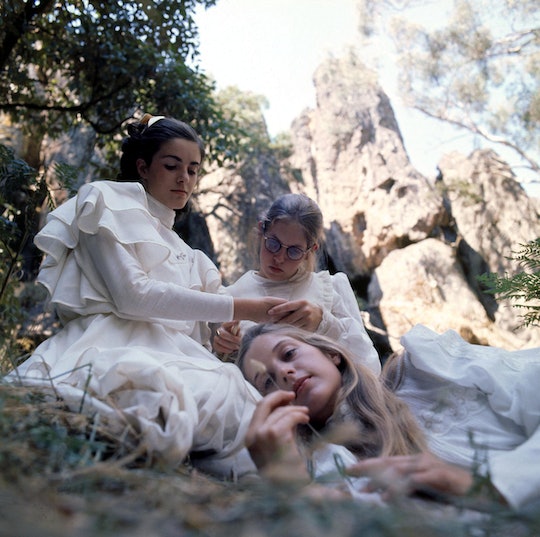 I Think About Becoming A Mountain

Upon having a rough day, who among us has not thought, “bugger it, I’m going to transubstantiate into a mineral formation.” I have, I absolutely have. I think often about how much easier my life would be if I was a high-alpine peak, but it’s not a new idea. Well before my worries began, Daphne, a river nymph, was turned into a laurel tree (a mineral-rich form!) by her father to avoid Apollo’s advances — I think we can agree a drastic solution to a fairly standard dating issue. Back then, people were being turned into stone left and right. But the idea endures.

Women have long reacted to adversarial situations by crying themselves into a waterfall, crystalizing into a cave high on a mountain. It’s often the one good avenue of recourse we have. Picnic At Hanging Rock, the film adaptation of Joan Lindsey’s self-same novel, gave us the hypnotic image of Miranda, Edith, Irma and Marion daisy-chaining their way up into the folds of Mount Macedon before disappearing. As the subsequently published final chapter of the novel over-explains, Marion, Miranda, and a teacher have gone into the mountain, in a metaphysical sense. (And good for them, when you read about the trappings of femininity and class in colonial Australia!) It’s a horror story, but reading and watching, part of you thinks, “I would like to be a part of that rock; also I should try a prairie dress.”

The film’s dresses have inspired fashion in the years since, a precarious style of dress that always suggests to me that we women could at any moment hike up and away, leaving only a set of drawers and lace maxi. Look for it and you see shades everywhere: The Chanel fall/winter 2018 show took place in a forest, the models strolling out of a temporal veil of sorts in their tweed, looking variably like spindly Ents, or a whirlwind of leaves; there is a photo from the show of Karl Lagerfeld standing by a warping doorway, as though all his models have been turned into trees, and he is about to be sucked into the abyss also.

Doubtless, you have sat on a warm rock at some point in your life and imagined soaking up the sun there until time ceases to be. Last year, I had a little epiphany about rocks after hiking out to an oasis near Joshua Tree National Park. I was crouched on a rock under a palm tree syphoning milk from my boobs with a manual pump — a process that seemingly took forever — when I thought: this is how you wind up a limestone cave. Three-thousand miles from my baby that weekend, I truly was squeezing blood from a stone. I finished, gave the rock a pat, and tossed the milk onto a thirsty cacti before I completed the transformation.

And it goes both ways: rocks have begun to take on human qualities. “This loving rock has given so much to an entire community and has much more to share. To whomever took her out the door, you do not want the energy of a stolen crystal, please trust me!” decried Amanda Chantal Bacon on the Moon Juice Instagram account after a theft. The Secret Life Of Plants posits that plants can not only feel, but are talking to outer space while we obliviously fiddle with those little baggies of herbs inside our Blue Apron boxes.

I was having my hair cut recently when the client in the chair next to mine began to talk about her hope to be put into a tree pod after she dies, a green burial that would allow her to live on as part of the tree. (“Not gonna lie, it sounds pretty sweet to us,” went an article in BUST on biopods.)

“I want to become one of those super mushrooms,” piped up my hair stylist, who is obviously from Oregon. “They’re enormous and interconnected under the ground. You’d be part of something huge.”

I always figured I’d just get scattered off the leeward side of a mountain top, but it does make you think. It’s especially impossible to ignore your mortality after having a baby. Anyone who has gone through the epic postpartum shed understands what it is like to feel deciduous, balling up all the loose hair to throw in the bin like so much leaf litter. In motherhood, I have frequently felt like something gone to seed, a tree about to drop a limb. Conversely, we all feel the need to be part of something bigger; we want to be less of ourselves and more of something more eternal (I was at a panel on postpartum mood a while back and asked a pair of newly graduated therapists sitting next to me if they could recommend any medical literature on existential grief: “Umm,” said one, racking her mind, “The Tibetan Book Of The Dead?”).

“How many fragments of ourselves were scattered, as if to live were to explode into splinters,” wrote Elena Ferrante in The Story Of The Lost Child, a book which sees a character snatched into an abyss, or perhaps returned there. The possibility of transformation is left open (unlike Lindsey, Ferrante doesn’t opt for a l i t e r a l explanation). From dust we came, to dust we will return.

And many of us would like to hurry that process along, it seems. Everywhere, people are sprinkling “adaptogenic” dirt into their lattes, spending their hard-won cash on crystal-activated water bottles, grounding themselves into the earth in penthouse yoga studios, rubbing charcoal on their teeth, painting geodes on their lips, and, when all that isn’t enough, trekking to Chimayo to source their own holy soil to rub into their torsos. Plastic micro particles are out, and minerals are in.

We are falling apart, but welcome our new dirt overlords.

It is the counterpart to the stress detailed in Anne Helen Peterson’s viral piece on millennial burnout. Like the slithering rocks of Death Valley, we appear to be gaining sentience. Humans are flooding national parks in search of pink sand, and purchasing stumps for their homes at a hefty markup. One of my favorite calming techniques is Google-searching images of Patagonia sleeping bags. Try it, and you are rewarded with a gallery of cozy bearded men propped like glow worms in crannies on the sides of jagged mountains, as if they ossified overnight. (Is there anything sexier than a man on his way to becoming petrified?)

Perhaps no book has toyed with the idea of turning yourself into the landscape more seriously than Han Kang’s The Vegetarian, which followed the character of Yeong-hye after she quit meat, then weaned herself off food and humanity entirely, at one point turning half to flowers under the paintbrush of her lechy brother-in-law. Yeong-hye’s transformation, it must be said, is in part about leaving behind the weight of a female body. (See also.)

“Look, sister, I'm doing a handstand; leaves are growing out of my body, roots are sprouting out of my hands… they delve down into the earth. Endlessly, endlessly… yes, I spread my legs because I wanted flowers to bloom from my crotch; I spread them wide,” wrote Kang, not sorry to have become impenetrable, as Ferrante might put it.

I, too, would like to leave my female body behind!

I would like to be a great granite mountain, so tall that only lichen and tundra survive on the top. One with interesting cracks to navigate, trees growing crookedly out of my armpits without anyone asking if I am “thinking of shaving” any time soon. The type that shakes off visitors by shrouding itself in fog or blowing them off the top.

I suppose in the meantime I could get myself some rose quartz.

As Adele told The Sun in 2016, “I got some new crystals now and everything’s been going well.”