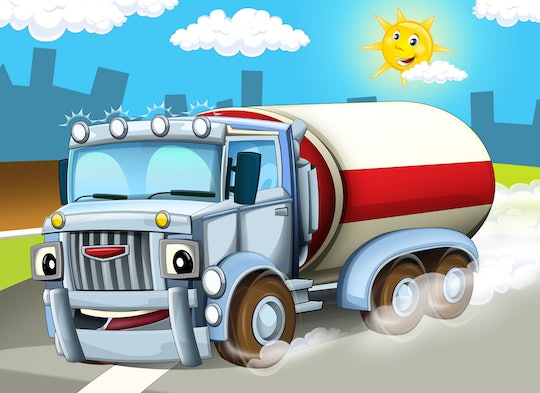 I Think I Know How Kids' TV Shows Get Made: A SCREENPLAY

[Board room. PRODUCERS are sitting nervously at a large conference room table. In bursts EXECUTIVE, who sits down in the big chair]

EXECUTIVE: What you guys got for me today?

PRODUCER 1: Okay. Picture this. Squiggles. They sing. And they fly.

EXECUTIVE: Hm. How loudly do they sing?

EXECUTIVE: What if the mom is in the next room, listening to a podcast in her headphones? What then?

PRODUCER 1: It’s a very abrasive register. She’ll be able to hear it. There’s no escaping it, sir. Not even from another floor.

EXECUTIVE: See people, this is the type of chutzpah I’m talking about. When I say “give ‘em,” you say:

EXECUTIVE: Bingo. Now, what do the squiggles say?

PRODUCER 1: Squiggle 1 says “It’s take-off time!” and the other one says “Waaaaaaaaaaaaaaayyyyyyyaaaaaaaaaaaa!” and then they both fly away. They say it three times per ep.

EXECUTIVE: Let’s ramp that up to five. And they don’t bounce at all?

EXECUTIVE: I’m floored. This is a masterpiece. No pilot necessary. [Hits a phone intercom button thing on the table] Tell the cable disruptors we’ve got another piece of sh*t for them!

[PRODUCER 1 gets congratulatory pats on the back]

EXECUTIVE: What else you guys got for me?

PRODUCER 2: Meet Fluffy guy, and his fluffy friends. They learn lessons because their parents are rough, not fluffy, so he's like adopted. He’s precocious and tells adults what’s what. He likes glitter and playing princess.

EXECUTIVE: Very woke. Very woke. I like it. Let's make him from Ohio-via-Guam.

PRODUCER 2: OK sure but we’ll sprinkle some casual sexism here and there...?

EXECUTIVE: Well obviously. Don’t give his sister any lines.

PRODUCER 2: Oh and they're claymation.

EXECUTIVE: Listen. Do I look like a millionaire? Claymation? You need to learn from Squiggles over there. Get this guy out of my sight!

EXECUTIVE It's weird CGI, bad puppets, or nothing. I'm talking: don't even make faces. That's too many details. I like 'em floating in space, without floors. It's gotta look like the animator fell asleep.

PRODUCER 3: I absolutely agree with you sir. Which is why I’d like to introduce…

[A guy walks in in massive, white, unwieldy costume. He can barely fit in the door]

EXECUTIVE: What is he?

WALLY: Oopsies! [Cartoonish giggle, he has a cockney accent]

PRODUCER 3: Yeah we’re thinking he’ll live against a green screen so we can put him basically wherever. He’ll sing the alphabet, baby shark, I’m sexy and I know it, the ujzse...we’re building a wall-themed waterpark... stadium shows at $150 a head...

PRODUCER 3: Extremely sir. We want kids to be terrified of the inanimate world around them, and for parents to feel a bit icky about the whole thing. Yet, it will keep going, inexplicably for years and years.

[PRODUCER 3 busts out a pie chart]

We feel that Wally is the perfect blend of “baffling,” “creepy,” and “pro-life propaganda.” Just enough to make the parents go, “wait what?”

WALLY: Life begins with a heartbeat!

WALLY: Hang a picture on me, guv’nah!

PRODUCER 3: Shut the eff up, Wally.

EXECUTIVE: Hm. And Wally... that sounds familiar, isn’t that a…

EXECUTIVE: I like how confusing that is. Legally precarious, even.

EXECUTIVE: I love it. You geniuses are going to make me the most despised human in America yet again.

EXECUTIVE: Because I don’t need food or money. I subsist entirely on the winces of parental annoyance. I sleep on a waterbed filled with mothers’ tears after their kids discover yet another talking-truck cartoon deep in the bowels of Hulu. I increase in strength every time a dad whistles the jingle from a sparkly magical kingdom show, then facepalms himself after realizing what he just did.

EXECUTIVE: So is he farting?