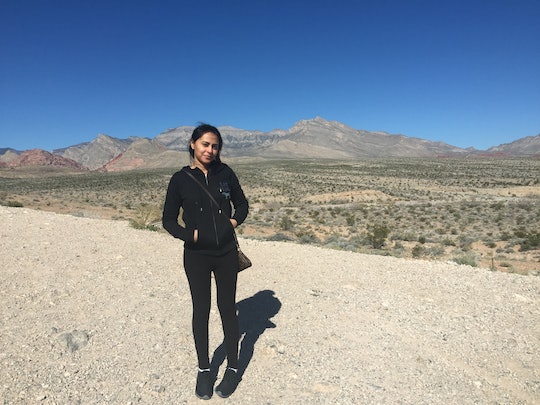 I Have PCOS, & Getting Pregnant Was Almost Impossible

Immediately after my husband and I got married, we decided that we were ready to start a family. We had been together for 9 years at that point, and we figured it was the right time to have a baby. I had no idea how difficult that process would be. I didn't know it at the time, but I had PCOS — and it took years of trying to conceive for my doctor to believe me.

Month after month passed. I still wasn't pregnant. At first, I thought my body was just adjusting to being off birth control for the first time in years. But after some time, I became anxious. Like most people in a crisis, I immediately Googled all of the different ways to increase my odds of getting pregnant. I tried everything: exercising, eating healthier, trying different positions during sex. But after six months or so, I began to worry that there was something wrong with me.

So I decided to try something different. I started tracking my basal body temperature and charting it every day on an app called My Days, because I thought that tracking your basal body temperature was a fairly reliable way to determine if and when you will ovulate. So every morning, I took my temperature before I even got out of bed, looking for a slight rise in temperature that would indicate I would ovulate soon. But my temperatures were all over the place, and there was no pattern to indicate that I was ovulating.

At this point, I was really worried. This was proof that something just wasn't right.

My husband thought I was overreacting, and my doctor told me I just needed to relax. But I couldn't sleep. All I thought about were the various articles I had read and all of the tips my friends and family had given me about trying to conceive. Some people told me to drink wine so I would feel more relaxed; others told me to just let it happen naturally. I kept visiting my doctor, hoping that he would provide answers, to no avail. I felt like I was the only one taking this issue seriously.

After researching my symptoms — the irregular periods, no sign of ovulation — I thought I might have Polycystic Ovarian Syndrome (PCOS), a hormonal imbalance that can result in small cysts on a woman's ovaries, acne, weight gain, and, yup, fertility issues. At first, my doctor was skeptical — but after a few tests,he confirmed I had it.

I had mixed feelings about my diagnosis. While I was relieved that I finally knew what was going on with my body, it felt like there was a big finger pointing at me that our inability to conceive was my problem. I was the reason why my husband would never become a father. I was the reason why my parents would never have grandchildren. It felt grossly unfair, because I was also the one who had to undergo testing, take medication, track my ovulation, and pee on a stick every month, only to be devastated every time I took a negative pregnancy test.

My doctor told me I should see a fertility expert, but I didn't want that to be my only option because I knew that would be expensive. After doing some more research, I asked him to put me on a drug called metformin, a drug that helps women with PCOS conceive. Metformin is primarily used to treat type 2 diabetes, but it can also help women with PCOS ovulate. I started taking it while continuing to track my basal body temperature. I did this for about a year, and still I couldn't get pregnant. I rarely ovulated, and when I did, it felt like we'd just missed our chance.

No matter what anyone said, I felt personally responsible for the fact that I couldn't get pregnant, and that weighed heavily on me.

Unlike me, who constantly obsessed over my inability to conceive, my husband had faith that everything would just work out in the end. Although he did everything I asked and went to every doctor's appointment, I felt like he didn't understand why I was so anxious about the whole thing. He hated how obsessed I had become with trying to get pregnant, because I think I had taken the fun out of sex for him. But he wasn't feeling the same pressure I was feeling.

At every family gathering, people would ask, "Are you pregnant yet?". And every morning that I tracked my temperature, I personally felt like I was failing them. When I didn't ovulate, it was a reminder that something was wrong with me. I felt this overwhelming since of guilt that I might not ever be able to give my husband a child. With every negative pregnancy test, I felt increasingly isolated and depressed. No matter what anyone said, I felt personally responsible for the fact that I couldn't get pregnant, and that weighed heavily on me.

I know there are a lot of women who struggle with infertility or issues with conceiving. But I wish people would have listened to me more, instead of telling me to relax or that it would just happen on its own when I least expected it. For some of us, getting pregnant just doesn't happen on its own, and I wish someone had told me that.

I had to work very hard to get pregnant, but eventually, all of my charts, techniques, medications, and research paid off. After being on metformin for months, exercising, dieting, and obsessively tracking my ovulation, I finally, finally managed to get pregnant. I realized that my high insulin levels as a result of my PCOS were likely affecting my fertility, as this is fairly common in women with my condition. But if I hadn't done the research and figured out I had PCOS in the first place, I'm sure my doctor would've suggested I see a fertility expert, and it would have cost me thousands and thousands of dollars.

For some of us, getting pregnant just doesn't happen on its own, and I wish someone had told me that.

Needless to say, I got a new doctor shortly before I gave birth to my daughter. But ultimately, when I look back on it, I think that much like most women who have struggled to get pregnant, I didn't want to be treated like I was crazy. I just wanted support. If I had gotten that support from the outset, I think trying to conceive would have been a lot easier for me.