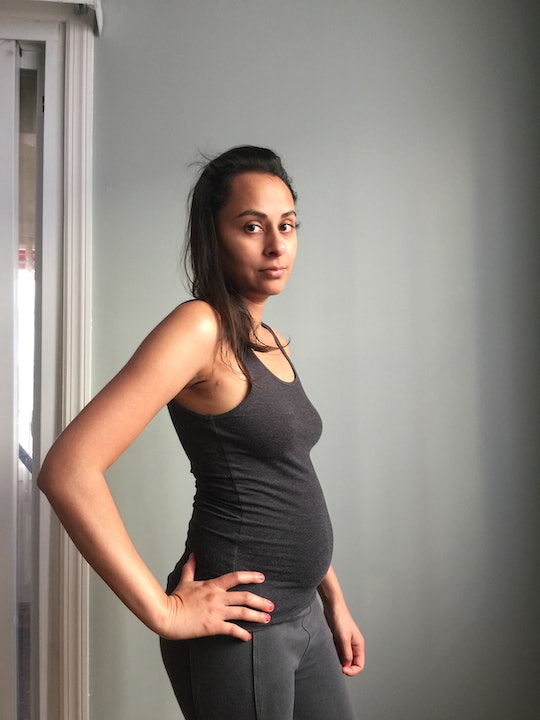 I Thought I Couldn't Lose The Baby Weight, But I Actually Had An Umbilical Hernia

During my pregnancy, I was what people called "all belly." Although I had a slew of issues during my pregnancy, such as gestational diabetes and a breeched baby, I actually gained very little weight except in my stomach. So even though I had a c-section, I expected my journey back to my pre-baby body to be a smooth one. But of course, that wasn't the case: after I gave birth, I thought I was just having trouble losing the baby weight, but I actually had an umbilical hernia.

In the first few weeks after I gave birth, I lost most of the weight that I'd gained during my pregnancy. It wasn't intentional: I was just stressed out and I kept forgetting to eat. I also was so tired and busy taking care of my daughter that I sometimes forgot to take care of myself. But I was able to fit into most of my old clothing shortly after I gave birth. My stomach still protruded slightly, but I didn’t think much of it.

After a few months, however, I began to notice that my small post-pregnancy "pouch" kept getting bigger. My belly button was also protruding, and you could see it through my clothes. I wasn't able to wear most of my jeans, so I wore leggings and loose fitting clothing. I started doing crunches and ab exercises and tried to eat healthier, but nothing seemed to help. In fact, my belly button seemed to stick out more and my stomach actually got bigger every time I exercised.

I posted on Facebook about my struggle, and a few moms commented that I shouldn’t worry about it. They encouraged me to give it some time and stop stressing out, so I took their advice. I thought I was just being impatient with myself, and I had no idea that I had an actual medical issue.

About 10 months postpartum, at a routine physical, my doctor took one look at my stomach and told me I had an umbilical hernia. The condition is caused by part of the intestine protruding through the umbilical opening in the abdominal muscles, which causes a person's belly button to stick out and their stomach to look larger.

I couldn't help but laugh, because my daughter also had an umbilical hernia when she was 2 months old. In fact, the condition is quite common in newborns, because the umbilical cord passes through a small opening in the baby's abdominal muscles during pregnancy. Usually, it closes just after birth, when abdominal muscles develop and strengthen, but this wasn't the case for my baby. At the time, our pediatrician assured us that eventually, our daughter's abdominal muscles would strengthen when she starting sitting up, and she would no longer have an umbilical hernia. Sure enough, it went away when she was about 4 months old.

After I received the diagnosis, I was relieved.

I had no idea that adults could get umbilical hernias, too — but apparently, they can. As my doctor explained to me, during pregnancy, a woman's abdominal muscles separate to make accommodations for a growing fetus. Sometimes this results in diastasis, or the weakening of abdominal tissue — and that can lead to a hernia. In my case, my muscles never fully aligned in their rightful place, and therefore my intestine (or part of it, at least) is now poking through an opening right into my belly button.

Usually, umbilical hernias are not dangerous, and they only cause mild discomfort and constipation. In some rare cases, a hernia can restrict blood flow, in which case immediate medical attention is required, but I pretty much felt fine.

After I received the diagnosis, I was relieved. Now I knew why my stomach wasn't getting flatter, and why my belly button looked so strange. I told my doctor that I had focused on ab exercises, and he immediately told me I was making my condition worse. The only way to treat an umbilical hernia, he said, was by having surgery. For babies, the condition can mostly heal itself because their muscles are still developing, but for adults, it's usually permanent.

Honestly, I was so angry. I had no idea what an umbilical hernia was, let alone that I was at risk for having one.

I have no way of knowing for sure what caused my hernia. It could have been trauma from my c-section, as about 2 in 1,000 women require surgery for a hernia after a c-section, or it could've been a result of heavy lifting, although I had gotten the all-clear to lift heavy items after my post-delivery 6-week checkup. Either way, having surgery was my only option if I wanted to take care of it.

My doctor told me I didn't need to get surgery if I wasn't in any sort of pain, and that I could leave it alone for the time being. But when I went to my OB/GYN for a second opinion, he explained that I should delay surgery only if I planned on having another baby within a year or so. He also mentioned that if I left it alone, the hernia would likely get bigger.

Honestly, I was so angry. I had no idea what an umbilical hernia was before my daughter had one, let alone that I was at risk. None of the pamphlets I was given included any information on postpartum hernias. Had I known, I would have rested more, or I would have been able to spot the signs earlier and refrained from exacerbating the situation. I drove myself crazy for months doing thousands of crunches and dieting, only to find out I was actually making my situation worse.

At first, I was really embarrassed about the way my stomach looked, but knowing that my body has gone through a lot to have a healthy baby has made me more comfortable with it.

Now, I'm faced with the decision of whether I should have surgery. As of right now, I don't have any pain — only mild discomfort if I wear tight pants. Since I stopped doing crunches, my hernia hasn't gotten any bigger; in fact it has gotten a bit smaller. But I'm not sure I want to go through another surgical procedure, if it's not completely necessary.

As of right now, I've adjusted to my new stomach and belly button. I wear looser clothing and try not to lift anything too heavy, which could make it worse. It will never go away on its own, but for now I'm just living with it. At first I was really embarrassed about the way my stomach looked, but knowing that my body has gone through a lot to have a healthy baby has made me more comfortable with it. I just wish I had known about umbilical hernias sooner, because it would have saved me a lot of stress.