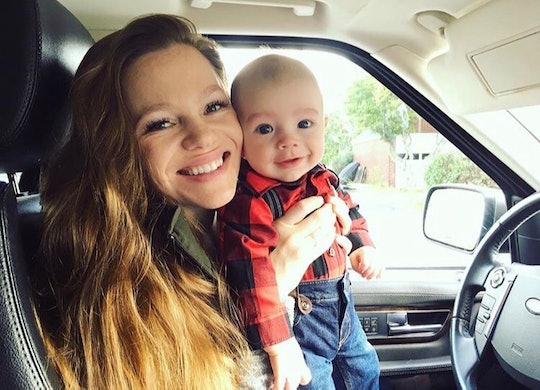 I Thought It Was Just Mom Rage, But It Was Something Else

It starts when I walk through the door and see my house is a complete mess. My 3-year-old is crashing his cars into the wall and my baby is wailing. Dishes are piled in the sink, the leftover grilled cheese sandwich from my toddler’s lunch is still on the kitchen table, and little things like my baby’s pacifier and my husband’s socks are scattered everywhere. It sends me into a cleaning frenzy and then the rage sets in.

I realize I’m shaking and rush into another room to count to 10 before I start yelling.

I hear my toddler in the other room asking my husband in the background, “Where did mommy go? Is mommy mad?”

Were there other moms out there who felt this? Who seemingly yelled at their kids sometimes for no reason at all and who spiraled out of control when things were not in order?

That’s usually how it plays out when my depression and anxiety rear its ugly head. I feel defeated and too tired to even cry.

My heart hurts because I love my family but lose my temper over and over. I know I shouldn’t feel like this but I do, and I’m terrified. Have I lost my mind? Do I have an anger problem? There are days I don’t recognize myself. Days where I wonder where my smile went. I wasn’t always this way though, it wasn’t until I had my second child when I began to realize I needed help.

My newborn was around eight weeks old but it all felt different this time around, something was off. My toddler could put his shoes on the wrong feet and I would become so angry I could spit nails. He could accidentally forget to flush the toilet and I would become hot under the collar with rage. He once asked if he could have cereal instead of waffles for breakfast and I acted like the world was ending. This is when I knew I wanted help.

A few weeks after that breakfast breakdown I had my first appointment with a therapist. I hauled my newborn with me and sat across from her on a big blue couch. She said, “Tell me, how are you today? What are you feeling?” It felt like such a loaded question because I was feeling so many ways about different things in my life. The most concerning though, was my anger. I let her lead the conversation because I felt guarded and afraid of what this might all reveal about me.

It wasn’t until the following session when I said, “I’m losing my temper about every little thing and it’s starting to scare me.” From that point on, I was an open book and 45 minutes later my therapist said, “What you’re feeling is more common than you think.”

That was my aha moment. She told me what I was feeling was normal and that my anxiety and depression were manifesting as anger. But could it be true? Were there other moms out there who felt this? Who seemingly yelled at their kids sometimes for no reason at all and who spiraled out of control when things were not in order?

Two months postpartum I was diagnosed with adjustment disorder with depression, anxiety, and a little bit of Post-Traumatic Stress Disorder (PTSD). That was one hard pill to swallow because it meant that I had to admit to having a mental illness.

After the first few sessions I felt ready to explain my feelings to my husband. Before bed one night I said, “I’m trying to be more aware of what exactly is triggering my anger. I don’t like feeling this way.” He responded, “You’re okay, the world isn’t ending, we’ve got a roof over our heads, just smile.” That was his way of being supportive and helpful, but the positive reinforcement didn’t help, in fact, it made it worse. And although I know it’s well-intentioned, I didn’t need to be cheered up, I didn’t need to be told to smile. I just wanted someone to tell me my feelings were valid.

And I couldn’t just “shake it off,” because the chemical imbalance in my body doesn’t work that way.

I spent weeks trying to be happier, trying not to sweat the small stuff. I even let the dishes collect in the sink to test my anxiety. But that isn’t how therapy works. You’re not “cured” once you talk about your thoughts and feelings, but instead you learn how to manage those thoughts and feelings. You learn what your triggers are and you learn what you can do before that anger boils over.

Battling depression and anxiety is hard. Raising children is hard. And doing them at the same time sometimes feels impossible.

It’s been four months since that first therapy session and I’m feeling better. My husband and I are on the same page and I’ve got a set of coping mechanisms in place if I ever feel that shiver up my spine. It’s slow in the making, but I feel more equipped and able to handle that monster I call Rage. There are days when I’m like a dog with two tails and other days when I’m in a black mood, but talk therapy has allowed me to express myself to someone objectively, with no strings attached.

So, I say this to my fellow mama’s struggling with depression and anxiety, I get it. You’re dealing with a chronic mental illness with an endless cycle of ups and downs. I know that tight feeling you get in your chest and the tidal waves of emotion that overcome your body at any given moment. Sometimes it’s easy to forget how to be happy, and sometimes you feel beaten to a pulp.

Battling depression and anxiety is hard. Raising children is hard. And doing them at the same time sometimes feels impossible, but keep fighting and know that you are not alone. Somewhere out there is another mama setting down her cup of coffee, clenching her fists and counting to 10 in her head. Somewhere out there is me, and we’re in this together.