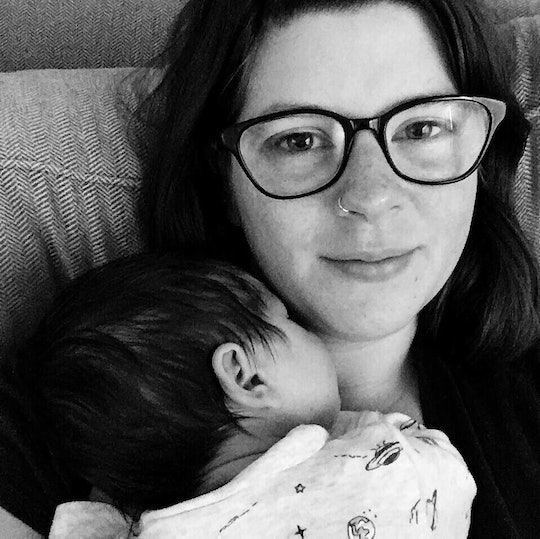 My Baby Had Torticollis, & I Had No Idea

I never expected my babies to have any complications after they were born. During each of my three pregnancies, I envisioned a simple childbirth. We'd spend two easy nights in the hospital, and then we'd seamlessly move back home. Those dreams of our family’s future never involved complications, big or small. It never crossed my mind to keep an eye out for symptoms of health issues, or signs that I needed to pay extra care to something. So I was completely blindsided when my son was diagnosed with torticollis, or a twisted neck.

At first, I didn’t notice that anything was going on with my son. After we got home from the hospital, we settled into our new routine as a family of five and I moved on with life as usual. I was overwhelmed by the work of taking care of a newborn and two toddlers, and I was completely focused on the next diaper change, getting three little bodies dressed and fed, and keeping up with my breastfeeding schedule. Honestly, sometimes it felt like I wasn’t capable of thinking clearly. That’s why it took two different comments from my mother-in-law for me to notice that there was something wrong with my son's neck.

After watching my son for a few hours one day, my mother-in-law said she thought something was off. She asked if I had ever noticed him just looking in one direction (I hadn't), and she suggested I look into it or see his doctor. I'd noticed that he could only turn his head one way, but I think I'd assumed his neck was just weak, and that as he grew older and got stronger he would hold his head upright at the midline, instead of favoring one side.

Torticollis, or twisted neck, is a condition diagnosed in infants. It's typically fairly mild and painless, but it does require treatment over the course of a few months. Torticollis can lead to some babies developing a flat spot on their head, which requires them to wear a custom-made helmet until their head shape normalizes.

I felt terrible that I had missed it, because the symptoms seemed so obvious in retrospect.

When I took my baby to the pediatrician, I was told that my baby was likely in a strange position in the womb that limited the development of his neck muscles on one side, so they were short and contracted. Because of this, his head would only flop to one side. As his neck muscles grew stronger, he had a limited range of motion, only looking to the left, which is a pretty typical symptom of torticollis.

Thankfully, since my mother-in-law noticed the symptoms pretty early on, we were able to get him diagnosed fairly quickly. I felt terrible that I had missed it, because it seemed so obvious in retrospect, but I was grateful to find out that his head only had a small flat spot that would correct itself after physical therapy and that he wouldn't need to wear a helmet or have additional treatment.

Therapy was straightforward, but pretty involved. At his first physical therapy appointment, I was taught several exercises for stretching the muscles in his neck. I was instructed to make sure I was doing the exercise five to seven times a day for ten minutes at a time. I also needed to faithfully give him tummy time, and make sure he had plenty of time to work on his neck strength each day.

To be perfectly honest, keeping up with my son's exercise was overwhelming, Some days, dinner time would roll around before I realized I had completely forgotten to stretch his neck that day. I set timers on my phone and tried to pair the exercises with diaper changes or feedings, but it was still hard to squeeze it into my day. He also hated it, wailing while I twisted his neck to the left and squirming while I pushed on his head to stretch out his muscles. At each follow-up appointment, I was nervous they would say he wasn’t making enough progress, and I would breathe a sigh of relief when they told me he was improving.

We continue therapy until he was cleared by his practitioner. Basically, the goal was that he would be able to hold his head perfectly upright at the midline, without showing preference to one side. Additionally, he needed to have a full range of motion when he turned his head to either side. After three months of therapy, when he was about 6 months old, he was released from treatment.

Knowing he was uncomfortable and couldn't fully use his neck made me feel awful. I wanted to do whatever it took to help him get stronger.

Of course, torticollis isn’t that serious, and it rarely has long-term complications. But when I was finally told he was better, that his neck was strong and that I didn’t have to keep manipulating his neck multiple times a day while he cried, I was so grateful. Knowing he was uncomfortable and couldn't fully use his neck made me feel awful. I wanted to do whatever it took to help him get stronger.

If you're worried your child might have torticollis, it's good to know that it doesn't come with a ton of risk factors; most kids simply need a few months of therapy, and then they're on their way to crawling and walking. It's simple to diagnose, too, and my pediatrician said she sees it all the time and most doctors know to keep an eye out for it in young kids. I just wish I had seen it sooner.