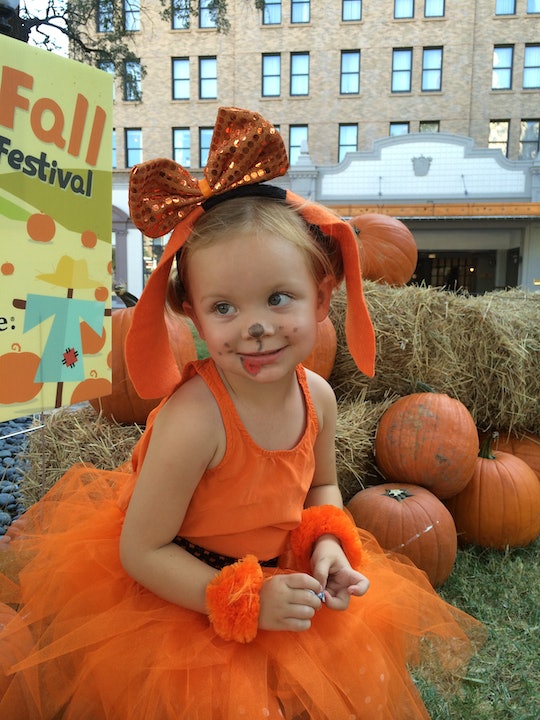 I Thought My Daughter Was Just Moody, But It Turns Out She Might Have PANDAS

My youngest daughter Violet was born with a smile on her face. She had a highly developed sense of humor at the ripe old age of 14 months, and for years, she would rise and shine every day with joy in her heart.

But a few months ago, I noticed that my once-smiley and happy little kid was starting to have some serious mood swings. She just always seemed to be pissy and miserable. We’d escaped the terrible twos and threes unscathed, so at first I assumed she was a late bloomer and that we were just embarking on the terrible fours. I brushed it off, assuming that Violet was just going through a phase.

But it wasn't just a phase. Violet continued to behave erratically, with extreme mood swings. She also started to exhibit verbal and physical tics, which she had never done before. It wasn't until months later, after we finally went to the doctor, that I discovered there was a possible medical explanation for my child's behavior. It's a Pediatric Autoimmune Neuropsychiatric Disorder Associated with Streptococcal Infections, which is more often referred to as PANDAS.

It took a while for us to consider there was something seriously wrong with Violet. At first, we thought maybe she was just having some blood sugar issues, because she’d almost immediately calm down if we shoved food in her mouth. We even joked that she could serve as the poster child for those Snickers commercials with the tagline "you're not you when you're hungry."

Then came the accidents. The first time Violet peed the bed at 4 years old, I figured it was because she'd gone to bed an hour and a half past her usual bedtime. Then it happened again, and again, then twice the next week week. It ramped up to the point that I had to put my 4-year-old back in Pull-Ups. But I had friends who confided that their kindergarteners were also still wearing Pull-Ups at night, so I wasn’t that worried.

We ignored her erratic behavior and hoped it would stop, but it didn’t.

Then came the tics. I first noticed it when we were watching a movie one day, and she would repeat every word of the dialogue under her breath. "What are you saying?," I asked her, but she seemed not to realize what she was doing. She reminded me of Brick on The Middle, who compulsively mutters words and phrases under his breath. After a week or two of that, Violet started blinking rhythmically. Then came the inappropriate laughter. When she was overstimulated, she'd let out a loud guffaw, but nothing was funny. I’d ask her if she thought of a joke or something, but all she said was that it felt good to make that sound.

Still, we weren't that concerned. Our oldest daughter had developed a verbal tic when she was about 3, right after we’d moved, and Sunny had started a new school. At the time, the doctor had told us it was actually pretty common for kids to develop tics when they were stressed or anxious, and the best thing for us to do was to ignore it and it should go away. Sunny got over hers in about a month, so we thought the same might happen with Violet. We ignored her erratic behavior and hoped it would stop, but it didn’t.

After a few months the mood swings started getting worse, and Violet had also started to develop severe separation anxiety. She’d had a ton of strep infections, so I had her home a lot with me. I assumed another kid in her class was picking on her or hurting her, and I kept pressing her to tell me why she’d gone from loving her preschool to not being able to walk in the front gate without turning white and begging to go home.

It wasn’t until Violet had a full-on meltdown over a potty break that I realized something was really wrong. I had driven the kids to Disney World by myself for Spring Break, so admittedly we were all tired. We were in the hotel room, and she’d been a bear all day, just grouching and bitching at everyone.

As I was getting our stuff unpacked, she told me she needed to go potty. The bathroom was maybe 30 steps away, so I saw no reason why she couldn’t just go alone. She told me she was scared to go alone, but I couldn’t for the life of me understand why.

I knelt down and scooped up that little pee-soaked kid in my arms. I held her as I reached for my phone to call the doctor.

It had been a long trip in the car, and I was frustrated. "Just go to the bathroom, for Christ's sakes," I snapped. She started throwing a fit and telling me I needed to go with her. Then she looked me in the eye as pee dripped out of her pants on to the floor.

I was furious. I’m not proud of this, but I yelled at her. "Why on earth would you pee on the floor rather than just go to the bathroom? It's right there," I said. She started to cry.

My father-in-law offered to take Sunny to the parks while I stayed behind to deal with Violet. I was on the floor of the hotel room cleaning up pee and lecturing her, and she started begging for me to hold her. The last thing I wanted to do was comfort the kid who looked me in the eye and defiled our deluxe resort hotel room, but something in her voice gave me pause. She truly did sound terrified.

I knelt down and scooped up that little pee-soaked kid in my arms. I held her as I reached for my phone to call the doctor.

When the doctor's office picked up, I casually told the nurse that I’d noticed a string of odd symptoms, but I assumed they were probably nothing. Almost immediately, the doctor told me to head straight to the emergency room. I was stunned.

"I'm actually in Disney World," I said. "Could this maybe wait until we got home?" She said it was my call, but if it were her child she’d go straight to the ER. "These are all signs of potential neurological damage. I wouldn't wait," she told me. I called the front desk for a cab, but instead the hotel sent paramedics to the room.

On the way to the hospital, the paramedic took Violet's vitals. She had perfectly normal blood pressure and totally normal glucose levels. She was the picture of health, and I felt like an idiot. Upon arrival, however, the doctor on call did an exam and told me to immediately cease all food and drinks. My daughter was showing classic signs of severe appendicitis, and she was almost positive we’d be in surgery within the hour.

The recurring strep infections, separation anxiety and tics I'd described set off an alarm. "Have you ever heard of something called PANDAS?" she asked.

After X-rays, ultrasounds and enough bloodwork to feed a sparkly vampire for a week, we found out she didn’t have appendicitis. What she had was a body that was packed with poop from her knees to her throat, and the right side was so packed it mimicked a rotten appendix. She had dilation of the colon, a fancy way of saying her poop tubes were stretched out from holding too much for too long.

We immediately started her on a double dose of laxatives. As we waited for the drugs to take effect, the doctor mentioned that she wanted to talk to me about another aspect of the diagnosis. The recurring strep infections, separation anxiety and tics I'd described set off an alarm. "Have you ever heard of something called PANDAS?" she asked.

I hadn't. I’d heard of the furry bamboo junkies in China, but I’d never heard the term in a medical setting. She explained that PANDAS, Pediatric Autoimmune Neuropsychiatric Disorders Associated with Streptococcal Infections, is basically a strep infection that is lurking in the body disguised as normal healthy cells. PANDAS weakens the blood-brain barrier and irritates the part of the brain that regulates things like movement, logical thinking, emotions and reasoning. The ER doctor said the diagnosis is controversial, because there is no one definitive test that can say whether or not they have it. But with her tics, mood swings and obsessive-compulsive behavior, Violet was showing telltale signs of the disorder.

I simultaneously felt terrified and relieved. All this time, I thought my baby girl was just turning into a crazed monster. Finding out that there was a medical reason for it gave me hope that she could get better. Still, having a diagnosis and having a cure are two different things. The ER doc said she wasn't sure there was an actual cure, only a focus on stopping the spread of the symptoms.

We sent the blood test results to our pediatrician. She confirmed that while she suspected Violet might have had PANDAS, she hesitated to suggest it as a possible cause, because much like ADHD, PANDAS has historically been over-diagnosed in kids, making the diagnosis more controversial.

I feel better knowing that my sweet little girl isn't gone. Her happy self is still in there.

Nonetheless, I was relieved to find a possible explanation for my child's behavior. While I’d always been worried that I would turn into one of those hypochondriac worry wart mothers, I'd almost missed the signs that my child actually had medical issues. I’ve learned now that my kid’s health is too important to brush off. I’d rather be the worrywart mom now, than the "Sorry, it's too late" mom later.

For now, we're in the process of trying to get Violet's tummy cleared out, which has greatly improved her mood. But I've noticed as soon as she doesn't poop, she becomes grouchy again, and the tics are unfortunately still there.

Our next step is to rule out other possible diagnoses, such as an allergy or celiac disease. The last thing Violet's pediatrician wants to do is diagnose her with PANDAS and miss something else. But I feel better knowing that my sweet little girl isn't gone. Her happy self is still in there. I just had to listen to my gut, so I could figure out what was wrong with hers.