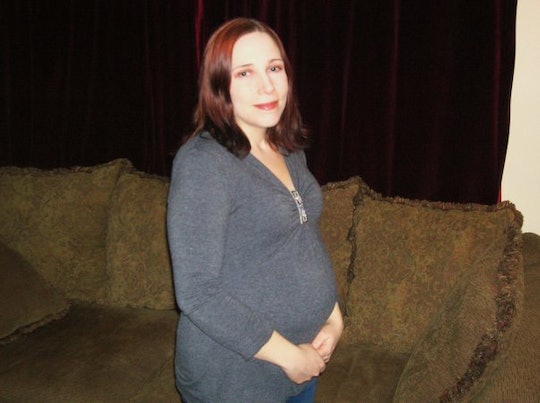 When I found out I was pregnant for the very first time I was committed to doing everything right. And as a working mom-to-be, doing everything "right" included making sure my pregnancy, delivery, and maternity leave wouldn't hurt my career. I was determined to "have it all," even before I actually understood what "it" was. So you better believe I timed my pregnancy so it wouldn't interfere with work.

I planned to get pregnant in the early fall, so I would have my baby in the late spring or early summer and avoid being absent from work during our busy winter season. I figured the timing was best for my coworkers, and taking maternity leave wouldn't interfere with my job or my climb up the career ladder. And when I got pregnant shortly after I started trying to conceive, it at least seemed like my plan was already working flawlessly.

Now, I'm not the only woman to plan her pregnancy in the hopes she can mitigate any potential fall-out at work. According to a June 2018 article in the New York Times, women still face significant pregnancy discrimination in the workplace, and 40 years after the passage of the Pregnancy Discrimination Act. They also face subtler pressures in the form of what researchers call the maternity wall — decreased pay for each child you have — and the motherhood penalty — a well-documented bias against hiring and promoting mothers. Dads, on the other hand, are often promoted after they have children. For a man, fatherhood actually helps his career. But for a woman? Well, not so much.

I've seen the backlash new moms experience first hand, so I knew what I was up against when I decided it was time to start a family. I've been asked when I plan to have babies during job interviews, and I've been questioned extensively about any potential pregnancies and/or my possible need for medical leave and accommodations. So I wasn't going into anything blind. I created a detailed spreadsheet, divvying up my work responsibilities and delegating them to co-workers during my absence. I also obsessed over proving myself valuable again and again before my baby arrived, so that my colleagues wouldn't see me as someone who put her family in front of career.

Sexist and discriminatory practices in the workplace cannot be planned around. Instead, they need to be eradicated.

I just had no idea that even if I did try to plan my pregnancy in a way that would impact my job the least, I would still experience discrimination in the workplace.

People seemed excited about my baby's birth, but also somewhat annoyed. Coworkers repeatedly asked me how much time I was taking off, as if my 12 weeks of maternity leave was no more than a vacation designed to make the miserable. And when I had my baby my co-workers still called me, emailed me, or texted me on a near-daily basis. There was no break, really, and the pressure to work on maternity leave was as intense as labor and delivery itself.

Allyson Downey, CEO of weeSpring and author of Here's the Plan. Your Practical, Tactical Guide to Advancing Your Career During Pregnancy and Parenthood told Forbes, believes it's totally possible to climb the career ladder while pregnant. If you time things right, make a plan for your maternity leave, provide a business case for your absences, and avoid talking about your pregnancy at work, you can have the baby and the badass corner office. Theoretically.

And I bought into that notion, until I realized that even with all the planning I was still made to feel like having a child was a burden. I was still robbed of a maternity leave where I could focus on healing, taking care of an infant, and adjusting to mom life. And, sadly, that was just the beginning.

As I continued to grow my family I've had to cut maternity leave short to make up for time that I was placed on medical bed rest. I've been told I might want to consider a career change to a less demanding field. I even was forced to quit a job altogether as a result of bed rest, and all the planning in the world couldn't have prevented these outcomes. Sexist and discriminatory practices in the workplace cannot be planned around. Instead, they need to be eradicated.

I didn't expect or believed I deserved "special treatment" as a pregnant woman or a working mom. But I know I shouldn't have been made to feel like I had to accommodate my work, my boss, and my coworkers when making a life decision as personal as when to get pregnant. And when I look back to all of the extra work I put into trying to make my pregnancy fit with my work life, I honestly wish I hadn't timed my pregnancy for anything other than when it was right for me and my family. Because, in the end, all my planning didn't matter.

Perhaps it's not on us women to plan our lives around the workplace. Perhaps it's time for the workplace to start accommodating women who make the decision to start families. Since our society doesn't seem to have a problem doing so for men who become fathers, it's time women are afforded the same kind of treatment.