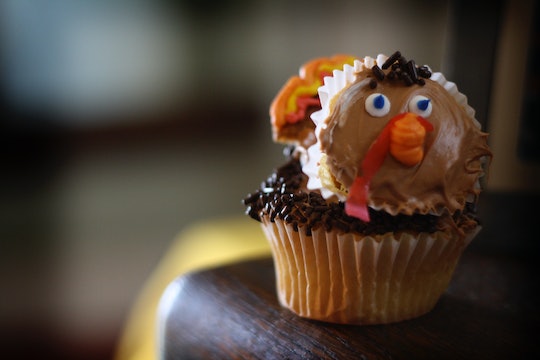 I Told My Son The Truth About Thanksgiving, & This Is Why I Did It

I homeschool my 5 year old in part because I’m terrified of history class. I know how textbooks get adopted. I know those textbooks tend to slant far to the right, omitting mention of the ugly side of our nation’s history like labor unions, Cesar Chavez, and slavery. And that’s a problem for me, because politically, I slant far to the left. I’ll teach my kids out of Howard Zinn’s A Young Person’s History of the United States when they’re old enough. We celebrate Columbus Day as Native Peoples’ Day. We’re always careful to talk about racism and colonization. Which is why it shouldn't too surprising that we decided to teach our children the truth about Thanksgiving.

More Like This
Kids Can Read For A Free Personal Pizza This Summer — Just Like You Used To
Vaccinated People Can Ditch Masks. Where Does That Leave Kids?
Is The Tooth Fairy Real?
33 Classic Movies For Kids That Aren't Cartoons

I was never going to feed my kids the typical Thanksgiving narrative. It’s the one I was fed, and it goes something like this: the virtuous Pilgrims, in their black hats and shoe buckles, who had names like Prudence and Absalom, left England due to relentless religious persecution. They sailed for America, a land of religious freedom, where they were met by an Indian savior who taught them how to plant fish heads under their corn and how not to die of starvation. The colonists and the indigenous peoples got along so well that, to celebrate, they threw a great feast, replete with lots of turkey, and that was the beginning of Thanksgiving!

There are so many problems with this narrative that it’s difficult to know where to begin. My son had not yet been tainted by the Mayflower Narrative, despite having relatives who’ve sailed on it. So I started at the beginning, where everything seemed to be the most problematic: the Indians.

The Wampanoag, I explained, lived in what’s now New England. We learned about their way of life, including their houses, their ceremonies, and their clothing. I bought my boys moccasins, and we dressed in brown leggings as breeches, with bare chests. Then, since the Wampanoag painted themselves, I let them draw on themselves with marker. They really liked that part. I did this not to appropriate, but to explain in a way that my sons understood. At this age, they learn more by doing than by being told, so I felt that letting them learn the true story on their own terms within our home was the simplest way to teach them. I was careful to ensure that they understood this was the story, not some fun art project.

After that, I wanted him to understand what the English did. It was important to me that my sons grow up realizing the legacy of colonization and oppression the Anglos brought to the “New” World. Indians/Native Americans have the right to tell their own stories — more right than those who slaughtered them. (Yes, I used the word “slaughter,” because even if it hadn’t happened at the time of the vaunted First Thanksgiving, it began soon after.)

“So when they got to the New World, and landed somewhere near Plymouth Rock in Massachusetts,” I began, “they found all this empty land already cleared and seemingly ready for them. They dropped to their knees and praised God. But really, they had smallpox to thank, because it killed all the Native Americans. Some of the villages still had unburied bodies in them.” It was a little graphic for a 5 year old, I’ll admit, but I felt it was better to be too graphic than to perpetuate a lie. I didn’t want him to think that God had actually ordained the land to belong to the English and their descendants, and I didn’t want my son to think that anything (aside from his person) just outright “belonged” to him or to another person. Those are stories I’m not comfortable spreading, however sweet and cuddly they may be.

I told him how Squanto appeared, and they praised God again, because here was a “savage,” as they called the Native Americans, who spoke English and who could help them. No matter that he was taken for a slave and shipped back only to find that his entire way of life had been destroyed. The Pilgrims didn’t know squat about planting and farming, and Squanto helped them so they didn’t starve. When they didn’t starve, they had a meal with all the local Native Americans thanking God. They brought food, the Native Americans brought food.

Squanto, I think, is an important part of the narrative. His slavery shows how the Pilgrims kept mistaking their own atrocities for the hand of the Lord Jesus. And the meal wasn’t particularly special to the Native Americans, who had harvest feasts every year. This time, they just invited the white people. And that was the first Thanksgiving, I said. There were more, of course, and this went on for a long time.

I told my son the truth because I don’t want him to grow up thinking the holiday had its roots in love and peace and brotherhood. It’s rooted in blood, slavery, and sickness; while not all the Pilgrims were evil, they were colonizers. I want my son to realize that. It’s important to me that he grows into someone who knows the truth and, more importantly, can handle the truth. Raising a child who isn’t ready for the world and all its harsh realities was never something on my parental prerogative.

At the end of the story, my son wasn’t very impressed. Because he’d never heard the original story, and because we talk a good bit about the horrible things white people do to people of color, he lacked the shock most kids would feel. On some level, I suspect he already knew the truth. As his parents, my partner and I have worked hard to build a household where all people of color are respected, where black lives do matter, and where we are allies to those who need allies. We don't gloss over important truths. We don't ignore the "ugly" — labor unions, Cesar Chavez, and slavery. My son has also never dressed up like a Pilgrim and sat down to pretend to serve dinner to kids wearing feathers on their heads, mostly because we homeschool. Luckily, he won’t. He knows the real story behind Thanksgiving.

This year, like so many others, we’ll celebrate the occasion the same way we’ve always done: We’ll read books about the Wampanoag. We’ll talk about their traditions, and maybe imitate some. We’ll tell the story of the Mayflower and the Pilgrims and their dinner. And their subsequent dinners. Then, a few days later, we’ll have our own dinner, with cornbread, oyster casserole, turkey, cranberry sauce, and stuffing. We’ll celebrate family. We’ll say thank you for the previous year. But we won’t mention the Pilgrims.