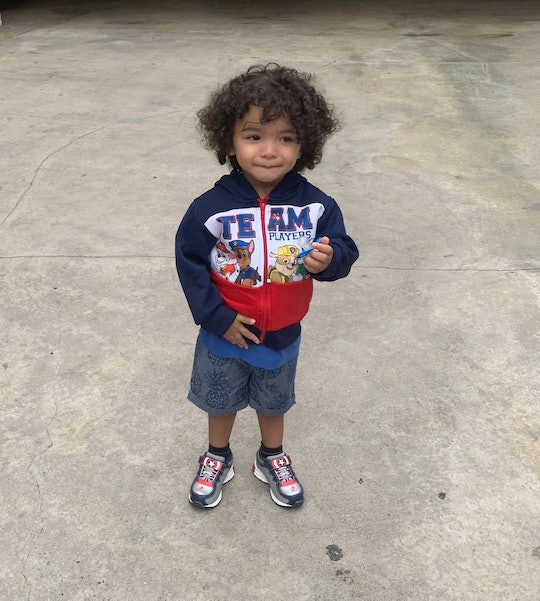 I Got My Kid Into Acting, Then Realized I Needed To Get Him Out

I'd been told for years that my kids are "so cute they should be acting/modeling!" blah blah blah, and it's hard not to wonder if people are right, if I should get my kids into acting.

I'd been acting since I was a teenager, in local plays before moving on to stand-up comedy, and film and TV roles, and I've always seen it as my career path and not my children's. I first started speaking with managers and agents when we moved to Los Angeles from Chicago seven years ago. I wanted all of my children to have fun childhoods, concentrating on whatever interested them. When the girls first started auditioning, they found it fun and new. Then it got to a point where every audition for them was "an adventure" as Mia would put it. She loved the days of going to auditions after school, the time alone we got when the audition was only for her. Kai, my son, was a different story.

Two-year-olds tend to be difficult, but Kai, my youngest, has never been difficult. He could play alone, play with his sisters, and gave me lots of affection. He'd always been a very chill, relaxed child. I thought putting him into acting would be a breeze, seeing as how friendly he was when strangers would approach at stores and in public, telling him how cute he was. All of my assumptions about his nature around strangers was incorrect.

The first real audition Kai went on was as a family. It was for a commercial. We had to pretend to have family dinner, in a normal but boisterous way. Kai couldn't sit still, over-excited about his surroundings. He wanted to grab things on the table, wanted to sit in a chair of his own instead of on my lap, and then started screaming for his dad, who was at the other end of the table. The casting director and producers in the room thought he was cute, and chuckled several times. We didn't get a callback.

My poor little boy went to pieces, got hysterical, and didn't calm down until the director said, 'I don't think this is going to work, sorry.'

The second audition we had, Kai was a bit more difficult. He missed his nap that day and it was complete pandemonium. Just waiting to go into the audition room proved trying. Once in there, he didn't want to be held and as the casting people asked us questions, I had to ask them to repeat because poor Kai started crying. Once it was over, I cuddled and coddled him, and he fell asleep in the car on the way home. We got a callback for that commercial, then actually booked it.

While we were thrilled to be working as a family, we got a call from production two days early asking if we could bring Kai in a day early to film a scene with a different family. I was perplexed but I said OK, though I knew once again our little Kai would be missing his nap.

The entire time, waiting around in the trailer to shoot, Kai was his usual bubbly, relaxed self until it was time to shoot. The set was in a kitchen of a house. He was to sit there and be cute, as the actor who would play his dad, laid on the floor, pretending to fix pipes under the sink. Kai was fine for the first few takes. I stood off to the side, Kai keeping a watchful eye on me.

Then the director decided to change the angle and some of the lighting. Several more men came in, moving lighting rigs around. In the process, I had to move out of the way several times. I could see it coming from a mile away — the moment Kai no longer had a visual on me, he cracked. My poor little boy went to pieces, got hysterical, and didn't calm down until the director said, "I don't think this is going to work, sorry." I apologized several times and took my little boy home. It was upsetting. I started to think it was probably because they had him work when it was supposed to be his nap time. I convinced myself that's what it was. The next day, the rest of us filmed as a family, excluding Kai, and I had to leave him with my aunt. I felt very guilty leaving him the day after such a scene.

His manager and agent decided along with me that the best thing for him was to pull him from auditions until further notice.

A few weeks later, Kai booked an independent documentary. He was to be in a flashback scene. All the way to set, I was nervous. He had an early call time, so it was nowhere near nap time. When we got to set, the director introduced himself and everyone else was nice and very inviting. The set teacher who was there for an older child actor played with Kai and provided him puzzles and coloring books. Everything went smoothly. The woman in charge of wardrobe even gave him a toy and cut up an apple for him. All of that didn't matter the moment it was time to film. My little boy screamed and cried! That's when I decided "Nope, this isn't for him" and picked him up and sang to him, calming him down and wiping his tears. Perhaps he thought I was leaving him? Perhaps the huge film camera was overwhelming? Whatever it was, he couldn't explain because he's 2, and that's where the problem lies.

Kai is unable to express his feelings about working in an already tough industry. My girls know for a fact that acting and auditioning right now is on a trial basis. If they decide they hate it or it's just not for them, there are other things they can do. Their father and I have left open the doors of communication so they can tell us how they're feeling. My poor little boy couldn't explain to me why the situation was so scary for him. For a while, I was afraid I'd traumatized him. His manager and agent decided along with me that the best thing for him was to pull him from auditions until further notice. We all agreed that 2 is a tough age.

In the meantime, Kai will have a normal childhood. He goes to the playground, does learning time at home and plays with his sisters. Acting is not the most important thing in the world anyway, especially when it comes to someone so young who can't fully express his feelings yet. I no longer have to dread such scenes when taking him to an audition or to film and I am lucky that we have a manager and agent who are parents themselves and are very understanding. In the future, I'll listen to what Kai wants, and if he wants to return to acting at some point, I'll definitely take it into consideration.

More Like This
6 Mindfulness Activities For Kids
What Age Do Kids Start School? Here’s What You Need To Know
12 Helpful Tips For Hiking With Kids
These Back-To-School Supplies On Amazon Are Total Wins