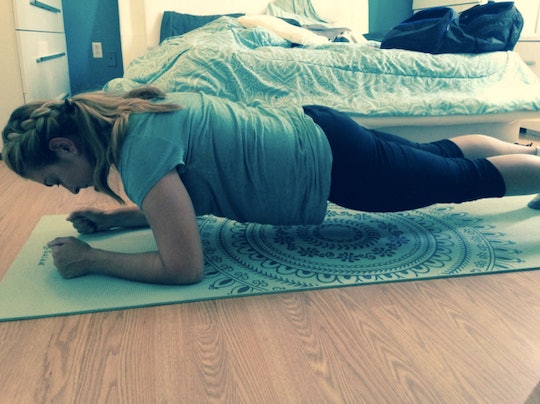 I Took The 30-Day Plank Challenge, & Here's What I Learned About My Body

Thanks to a twin pregnancy that did a number on my ab muscles, and the fact that my crush on cupcakes is bigger than Ginny’s crush on Harry, I know it’s unlikely that I’ll ever be able to wash laundry on my stomach. Even though adhering to some societal expectation has never been my goal, working out has tons of benefits besides the way it impacts your appearance, so I do it anyway. Due to a medical condition, my bone density is lower than average, and even at age 31, I have a heightened risk for osteoporosis. My doctor told me strength-training and running can help prevent further bone loss, so while I love the way working out makes me feel, my concerns are really for my overall health. I’m already a big fan of running and dance fitness classes, and I do yoga and weight lifting regularly.

I love how I feel ready to conquer the world after working up a sweat, and even though I’m moving, it’s actually relaxing to get some time away from the kids and do something that’s just for me. I have occasional panic attacks, and when I’m working out regularly, they seem to happen far less often. But I can never seem to find time to work on my core, probably because the second I lay down on the floor my toddlers think I want to play with them and pounce on me. A strong core is important for many reasons, like strengthening your spine and helping your balance, which helps you stand, sit, squat, move — basically do anything all day long. A strong, supported core doesn't just equal washboard abs: it means you've got strong front, side, and back abs. It also means I can run, jump, skip, hop, dance, and be silly with my boys all day long without tiring out or feeling weak. It means I can be healthier for my sons and most importantly, for myself.

I’ve been seeing a lot of things online about the 30-day plank challenge, and it seemed like perfect solution that would let me work on my core with practically no time commitment. (#Goals.) But was it too good to be true? I decided to try it and find out.

The internet is filled printable 30-day plank challenge charts, and nearly all of them start with a 30-second plank and end with a five-minute plank. I picked one at random and wrote it down, because I grew up before iPhones and enjoy crossing workouts off when completed.

As a former group fitness instructor and certified personal trainer, a few things really bothered me about the plank charts available online. First, they offered no instruction on how to perform a proper plank. In fact, many of the images showed the model looking up with a smile, which looks great for pictures, but isn’t proper plank form and could cause injury. Also, who smiles when they’re planking?

There are also ways to modify a plank to make it easier or more challenging, none of which are covered in these 30-day charts. Planks work major muscle groups, so an injury while doing one could really take a toll.

That being said, week one was pretty easy. By the end of the week, I was holding a 45-second plank, even though the last few seconds were uncomfortable. I started to fantasize about calling my abs a “situation” and what it would be like to have Jillian Michaels be envious of me. This seemed so easy, why doesn’t everyone just plank instead of doing other core exercises?

By the end of week two, my confidence was failing. Holding a 90-second plank was extremely challenging, and I was shocked to find it wasn’t my core muscles that were having the hardest time, it was my shoulders and lower back. On the days I ran beforehand, my legs were also displeased with the planking and I really had to motivate myself to get on the floor and do it.

In order to make it through, I started watching YouTube videos as a distraction, since I could place the iPad flat on the floor to maintain proper form. While I had managed to keep up with the program so far, I didn’t feel like I was getting any stronger. It wasn’t computing for me how I would magically be able to hold a longer plank each day when I wasn’t doing much to condition my core or make it stronger besides a single plank.

This 30-day challenge was beginning to feel too good to be true.

My concerns about not gaining strength were proved valid on day 18. I tried to hold a plank for two minutes and 30 seconds. Even though I tried as hard as I could, I only made it one minute and 38 seconds before I had to take a break because the pain in my lower back was too intense.

Although I was disappointed that I had to split the plank in two, this failed attempt served a purpose. I had set out to do this experiment thinking it was the front of my abs that needed strengthening, but this made me realize my back was also weak, and I needed to make it stronger to help protect myself from injury when picking up my kids.

The following day, I dug too deep and insisted on holding the plank for the entire two minutes and 30 seconds. I knew it was a bad idea as soon as I came out of the plank. I had pulled my lower back, and needed three days of recovery before I felt well enough to return to working out. I was mad at myself for letting some chart from the Internet, possibly written by someone with no fitness education, convince me that I should be able to do something I couldn’t. It was a good reminder to know myself and my own limits, and to remember that just because something’s on the internet doesn’t mean it’s legit.

All too often I see or read about a celebrity mom who “got her body back” almost immediately after giving birth and I have to work hard to remind myself that the cover model gets the benefit of flattering lighting, Photoshop, and a personal trainer. Until Dr. Who’s time machine is available for purchase, I can’t get my pre-baby body back. I can only work with the body that I have right now and work towards being stronger.

This week was my moment of truth. I had a feeling holding a single plank for five minutes wasn’t going to happen, and I was right, but I’m proud of myself for pushing through and finishing, even if I had to break it into three separate planks with a few seconds of rest between them. While part of me felt like I was a failure for not being able to hold a single plank and therefore I should just quit, the other half of me knew five minutes is an arbitrary number. What really mattered was that I was making my core stronger and doing more than I would be had I not done the experiment.

Looking at the photos of the start of the experiment versus at the end, there’s really no visible difference in my stomach’s appearance, and to be honest, I didn’t really expect washboard abs at the end of the month. I do feel like my core is stronger, even though it would have been nice to have even a small visible change to validate all my effort. Even though I know working out is about more than your appearance, I was embarrassed to tell people about my experiment, mainly because they’d ask to see my abs, and I was ashamed that they weren’t “ripped”. So much of the conversation around ab exercises surrounds vanity, and there’s not enough focus on the functionality of the workout which frustrated me. Even when I wasn’t talking to someone in person, be it texting, Facebook, or email, no one really cared that my neck wasn’t hurting as much after a run or that I could pick up both twins without feeling like I wanted to die -- they just wanted me to send them a picture of my abs.

After A Month Of Planking, What Did I Learn?

Doing a month-long plank challenge gave me new respect for fitness professionals. I got just a small glimpse into how much effort and time it takes to achieve and maintain core muscles like that. I do feel stronger and more stable in my day-to-day activities, like hauling kids around or when I’m trying to bring multiple hampers full of laundry up and down the stairs. Although I might not look like a fitness model, I was reminded that someone’s outward appearance isn’t always a good indicator of their health or physical abilities.

This challenge served as a good test of my perseverance, and made me realize I’m more stubborn and determined than I thought. Every single night after the kids went to bed, no matter how tired I was, I forced myself to do something I knew I wasn’t going to excel at. As an adult, it’s easy not to step outside my comfort zone, but I’m glad I pushed myself. It’s taught me that I don’t have to shy away from experiences, and that I can try new things without the fear of failing — and if I do, so what? At least I can say I tried.