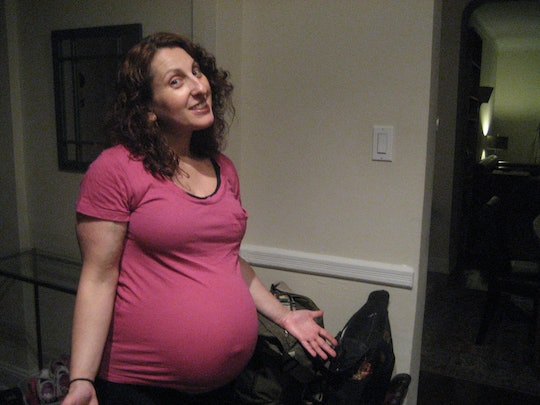 Although there are signs imploring subway riders to give up their seats for the elderly, disabled, and pregnant women, I know firsthand those ads don’t work. It is so rare for for those people to get seats on a crowded train that one woman, eight months pregnant, even bestowed a trophy on the man who stood so she could sit. I would have given out awards too, if someone had offered their seat during my pregnancy. But at 10 days past my due date, there I was, hugging the pole as I stood on the subway on my way to give birth to my daughter.

In the last several weeks of my pregnancy, I was shlepping uptown from Queens, taking two trains to get a sonogram twice a week because it appeared my fetus was measuring small. I never hated the train as much as I did I commuted back and forth multiple times for a 10-minute procedure, where the doctor would declare: “OK, well, things seem fine but come back in three days.”

Finally, the day after my last sonogram, when I was downtown looking at couches with my husband in an attempt to distract myself from this never-ending pregnancy, my doctor called: my amniotic fluid was on the low end of normal and that qualified me for a bed to start the induction process.

The catch was that I had to go home first because I didn’t have my hospital bag. We had to take the E train all the way uptown and across to Queens, a 45-minute trip at best, but is was rush hour and the MTA excels at failing its customers when they are greatest in number.

We boarded the train at Spring Street, and it was already full. Unseasonably warm for early November, I had no coat on; at nine days past my due date, I was undeniably, gigantically pregnant. I highly doubt, just based on the law of averages, that all the seated subway riders on the crowded car failed to notice my condition. Likely many noticed. And of the ones who noticed, there had to have been at least a few able-bodied men and unencumbered younger women who made the deliberate choice not to trade places with me.

Though I am an able-bodied woman, I always offer my seat (in the rare instance when I have one) to people who look like they could use it. Am I making judgment calls by doing this? Absolutely. I’m acting as gatekeeper for the hallowed subway seat. I’m deciding that a guy in his 20s with a cane is more worthy of my seat than a middle-aged woman who may have an ailment I can’t see.

So maybe all those seated passengers who might or might not have noticed that my hugely pregnant body was standing, getting jostled by other straphangers, assessed my condition and decided I looked strong enough to endure the cramped conditions of the ride while standing.

I thank them for their confidence in my fitness level. I curse them for not giving me the choice to accept or turn down their seat offer.

One of the most valuable lessons of pregnancy was how to acclimate to my life that was no longer my own. Becoming a parent meant adjusting to having so many choices made for me. Choices about how I spent my time, what I ate (while pregnant and during extended breastfeeding), and who I chose to let into my — and thus my child’s — life. It was jolting. I didn’t have children until my mid-30s so I had been adulting for a significant amount of time. I was used to being in control of almost everything about my career, my social life, and my relationships. But once pregnant, I wasn’t making choices for just me… I was making them for a new human I intended to raise as a good person. Everything about how I moved through my days, ever since that plus sign appeared on the pee stick, was loaded with more dire consequences than ever.

Standing on a crowded subway while 41.5 weeks pregnant was not the worst thing that ever happened to me. I made it back to Queens, grabbed the hospital bag, and then got into a car with my husband, back into Manhattan to the Labor and Delivery ward of Lenox Hill, and 24 hours later we were holding our healthy newborn daughter.

The abrasive irony in all this is that I have actually been offered a seat since having kids. Go figure. I guess shapeless shift dresses are your subway seat hack.