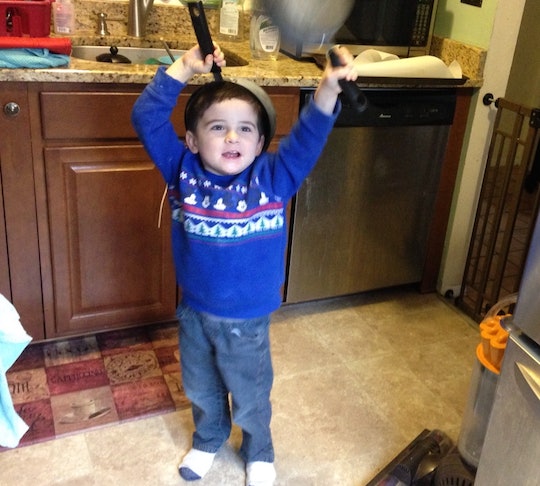 I Tracked My 4-Year-Old Son's Steps For A Week

When my twin sons took their first steps, I was thrilled by the thought that I wouldn't have to carry them around everywhere anymore. As they got older and steadier on their little legs, I started leaving the stroller behind on day trips to the zoo or when headed out to the park because my toddlers have so much energy that it made sense to burn it off. But even though they just turned 4 years old, they still ask me to pick them up and carry them all the time. While I enjoy the occasional nostalgia that comes with cradling them against me, my back and biceps feel differently about picking them up on the regular.

Even though they're great eaters at mealtime, they're always asking for snacks. Sometimes they'll ask me for a banana with peanut butter while they're still finishing up the crackers I just gave them. If I let them, they'd stand in the kitchen and munch from breakfast until lunch. I get that kids have growth spurts that can increase their appetite, but I wasn't expecting to go through this much food until they were teenagers. They're in Pre-K, not training for the Olympics.

They still take daily naps, sit for circle time at school, and they get to lounge in the cart while I push them around the grocery store and Target, so I just didn't understand why they were always complaining that they were too tired to walk any more. The life of a preschooler seems pretty pampered to me. Still, I wanted to see if their requests to be carried and for more crackers were legit, so I decided to see exactly how many steps my preschooler was getting in a day.

For five days I had one of my 4-year-old sons wear my Fitbit Alta around his ankle to keep track of how many steps he was getting, and took note of how often and how much he snacked between meals. I also noted how often he asked to be carried, and whether his request to be picked up happened more frequently on days when his step count was higher. (I tried to convince his twin brother to wear my old Fitbit One to have a larger study size, but as the Fitbit One was neither red, sparkly, or covered in Lady and the Tramp stickers, he was having none of it). I wanted to know if he was actually tired and hungry when he acts like this, or was he just looking for an easy way to score a cookie and some cuddles?

Day 1: This Fitbit Must Be Broken

We had a busy day on day one of the experiment, but it was pretty typical in terms of our activity level for a weekend day. We woke up, and I strapped my FitBit to Remy's ankle like a tiny kid on house arrest. We had breakfast and then headed to church for the first time in forever because it was their preschool's Open House day. Parking is scare downtown, so we parked at the school and walked the quarter mile to and from church. The kids managed it without complains, and spent the afternoon hanging around their classroom playing with their friends.

Afterwards they napped in the car with their father while I ran into the pharmacy and sat in carts while we did a Target run. I wasn't surprised when I checked my own Fitbit at 4:30 and saw I had 6,724 steps — that felt about right. But when I looked at his readout, I was shocked. He had 7,632 steps, almost 1,000 more than I did. Because he'd napped and sat in the cart while we were in Target, I assumed he'd taken far fewer steps than I had. Suddenly I understood why he was asking me for dinner even though it wasn't even 5 p.m. yet.

That night, as I watched him run in place for a few seconds after putting on his pajamas (Chase from Paw Patrol makes him want to dance, apparently), I realized the reason his steps were so much higher than mine was because his legs are shorter, so it takes him more steps to cover the same ground as me. Plus, he takes extra steps to do things, like stumbling around the bathroom while brushing his teeth, or this mid-pajama celebratory dance break. He ended the day with 9,834 steps, almost hitting the recommended daily steps for an adult.

I went to Zumba class after dropping the kids off at preschool and felt pretty smug about the 6,982 steps I logged while there. I worked from the couch for most of the rest of the day and ended the night at 8,731 steps. Meanwhile, my son tore off his Fitbit 20 minutes before bedtime but not before logging an impressive 11,671 steps for the day. That's right, even though I'd gone to the gym for an hour my 4 year old still out-stepped me for the day. It made total sense why he came home from school with his lunch totally gone but still asked for a granola bar and apple slices for snack, and then downed a grilled cheese with applesauce for dinner. Afterwards he asked to come "talk to me," aka sit in my lap and steal my popcorn.

Their teacher told me they napped well and had a good day, so I didn't know what the problem was, but I drove home as fast as I could to make him a PB&J. He ate it. Then he ate a yogurt, a giant sugar cookie, and an applesauce pouch. I was positive he'd be too full for dinner, but he polished off a bowl of veggie pasta with turkey meatballs like it was the first meal he'd seen all day.

I did some digging and found out that, apparently, his step count is actually in line with what's normal and healthy for his age. According to the American Academy of Pediatrics, the 10,000 steps a day number we've all had drilled into our heads is only the standard for adults. Kids actually need to take more steps than adults to stay healthy. The guidelines are 11,000 to 12,000 steps per day for girls, and 13,000 to 15,000 steps per day for boys. But Leah M. Scherzer, MD, attending physician at St. Christopher’s Hospital for Children in Philadelphia, told me in an interview with Romper that while those step counts are indeed accurate, they're only applicable for kids who are 6 years old or older, not for my toddlers or preschoolers. I still wasn't sure if my little stepper was wearing himself out or actually not getting enough exercise.

In a separate interview with Romper, Dr. Ellie Kleyman, a pediatrician at Kaiser Permanente in West Los Angeles, shared:

Since I knew he had gym and double recess that day at school, which totaled up to an hour, I figured 11,000 steps was roughly what an hour of exercise looked like for my preschooler.

It started snowing on day three of the experiment around 10 in the morning, and it wasn't a school day so I ran the boys to the post office and the grocery store quickly and then we hunkered down to make cookies and watch cartoons and build block towers. At the end of the day when I checked out the FitBit, he'd only gotten 5,669 steps. On one hand, I was impressed he still made it over the adult halfway point and did far better than my sloth self, but I was also honestly surprised at how low his total was. He spent a lot of his time during the day running back and forth through the house (even though I told him not to), rolling around on the floor with his brother (even though I told him not to), and jumping on the couch (that one, he got yelled at for).

The kids begged me to go outside and play in the snow, and I refused because being cold and wet is low on my list of priorities. Plus, I thought they had gotten plenty of activity inside the house that day. Turns out, I was wrong. Day three of the experiment served as a pretty typical example of on a non-preschool day or weekend in the winter, and based on what the doctors I spoke with said and the cold, hard facts of the FitBit, I knew my kids aren't getting enough activity on days when we're just hanging out inside the house. No wonder I ate the majority of the sugar cookies we'd made and they only picked at lunch and dinner - he and his brother just weren't burning enough calories to be hungry enough to want to eat them.

I'm still not going to take them out into the snow (yuck), but I hopped on Amazon Prime and ordered a indoor trampoline to help us survive until the snow melts.

Day 4: Even Preschoolers Get Hangry

When I picked the kids up from school on day four, instead of the usual hugs and kisses, I was met with demands: "Why didn't you bring snacks?" Remy snarled as he glared at me from his car-seat throne. Their teacher told me they napped well and had a good day, so I didn't know what the problem was, but I drove home as fast as I could to make him a PB&J. He ate it. Then he ate a yogurt, a giant sugar cookie, and an applesauce pouch. I was positive he'd be too full for dinner, but he polished off a bowl of veggie pasta with turkey meatballs like it was the first meal he'd seen all day.

He begged for me to carry him upstairs to bed that night, and I did. When I looked at his Fitbit I saw he had logged 12,342 steps. I have no clue what they did in school to make them that active, especially since they had indoor recess, but I'm sure his teacher earned herself an extra glass of wine that night.

I came home from weight-lifting class at the gym and had a mini-meltdown because I was really looking forward to a banana with peanut butter as a post workout snack, but we were out of bananas. As I stood pouting in front of the refrigerator, I realized that when I hit my daily step count for the day I'm exhausted and scouring the cabinet for secret stashes of candy, so it makes sense that my kids act in the same way.

On day five, Remy took a two-hour nap today and sat through a Moana sing-a-long, but still got in 9,6,76 steps, which showed he was really moving when he wasn't sleeping or laying down. I never realized how much of my kids' days are spent on their feet playing, but now that I've been tracking his activity (and his brothers by association), I understand why he's always asking for snacks and wanting a break from walking.

Are My Kids' Complaints About Being Tired From Walking So Much Actually Legit?

Surprisingly, yeah. It turns out my preschooler was getting way more exercise than I thought on days he was in school, but sometimes not enough on the days we were stuck inside at home. And it's totally normal for an active preschool to be a bottomless pit when it comes to snacking.

This experiment served as a great reminder that kids can do more than you think, but also, their legs are shorter and walking takes energy, so they're not always just whining when they ask you to carry them or for a snack. I'm not going to complain anymore when they ask me to carry them in public, but for the comfort of their legs and my arms, I'm going to pull our stroller out of storage, at least for longer day trips.