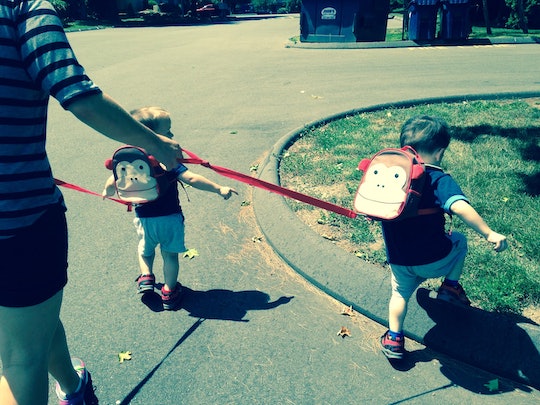 I Traded My Stroller For Toddler Leashes, & This Is How It Went

I have very active twin 2-and-half-year-old boys. Although they loved being pushed around as infants, as they’ve gotten better at walking they are less and less enthused with the idea of being strapped down in a stroller. Usually, we take a double-wide umbrella stroller with us when we venture out of the house, which is just wide enough to skim the sides of every store display we pass for the kids to grab things, and heavy enough that my back hates me after a day of hauling it in and out of the car. In the past few weeks, our mutual dislike for the stroller has been at an all-time high. I spend a lot of time pleading with them to sit down so we can finish our outing and get on with the day.

Some people think putting kids on leashes is a ridiculous practice that should be reserved for pets, but I’m willing to try anything that can make this crazy ride (literally and figuratively) any easier. So when the opportunity came along to try toddler leashes, you already know what I did, don't you? I signed up.

I know eventually my boys will have to learn to walk in public, but right now they aren’t fabulous at listening when you ask them to hold your hand. Using backpack leashes seemed like an easy way to make the transition from being cooped up in the stroller to walking around on their own. I decided to use the toddler leashes for a week instead of the stroller to see if it made being out in public less frantic.

Here’s a recounting of our (mis)adventures.

I’m training for my second half marathon, so it’s not uncommon for me to put the boys in the jogging stroller and head out for three or four miles. But since those runs are frequently paused by their need to blow a dandelion, pick up a stick, and hold this leaf, no, that leaf, no, his brother’s leaf, I thought I’d give my arms a break and let them walk instead.

It was nice to let the kids have the freedom to hug a tree or examine a rock without having to worry about them running into an oncoming car, but I felt like a novice dog walker whenever the boys would cross their leashes. It also sounded like I was walking a couple of puppies since I was saying things like “come on!” ”leave it!” and “good boys!”

I knew going into the walk we probably wouldn’t get through our usual route, but I did think we’d at least make it past the mailbox. But the novelty of walking faded quickly and they decided leaning forward on the leads and falling slowly to the ground was hilarious. Getting back to the house took twice as long as going out, all because of the boys’ growing giddiness. Thanks to all the tugging, my arms were just as sore as they are from pushing the jogging stroller.

We tried going for a walk twice more throughout the week, and it never got any easier. I had to actively remind myself not to gently tug on the leash the way I would when trying to get a dog to start moving, because when I tried that, the boys toppled right over and I felt horrible.

An outing to Target is a big part of my woefully pathetic social life, and the boys look forward to it as well, mainly because they love the shopping carts with the double seats. It’s a nice break to push them up and down the aisles knowing they’re contained. I wasn’t thrilled about the idea of having them on the leashes, right at the perfect level to grab and break things. Still, I was going to try it.

But when we got to Target and I went to put on their monkey backpacks, the kids were having none of it. They insisted on riding the “train” cart, and both pitched a fit in the parking lot. Honestly, I was relieved. I know one day they will have to learn how to walk in a store while behaving, but today was not that day.

Double cart for the win.

I always use the stroller to bring the kids to the pool so I can put our stuff down and take off my flip flops and cover-up without worrying about them making a mad dash for the deep end. I thought the leashes would still work though, because I could hold them in one hand until I was ready to get into the water. I was wrong.

The kids were so excited to swim that instead of waiting for my partner and I to take off our shoes and tops, the kids simply unbuckled their backpacks and high-tailed it to the water. Luckily we were at the shallow end of the pool and by the time the boys had their feet on the first step I had reached them and my partner wasn’t far behind. Even though they were standing in three inches of water, the what-ifs ran through my head. Fear combined with the aftershocks of adrenaline left me feeling shaky and nauseous, and we left the pool after a couple minutes because I couldn’t relax.

I attempted to explain to the boys how dangerous their stunt was, but they didn’t really understand, though they seemed very upset at seeing me cry and kept giving me hugs and kisses. Maybe on some level they got the message. Because they usually liked wearing the packs, it never crossed my mind how easily they could take them off. Because the pack can easily be removed by the child wearing it, I wondered if they provide a false sense of security, especially around highly dangerous areas like water and traffic.

We definitely won’t try leashes at the pool again.

Outing #4: At The Local Farm

A small local farm in town offers pick-your-own fruit, a petting zoo, and frozen custard at ridiculously low prices, so we head there as a family usually once a week. I typically let the boys run free there, but since the parking lot is close to the attractions I thought the leashes could help me worry a bit less. Honestly, they weren’t really necessary at all.

The farm is small enough that the packs ended up serving as cute accessories more than safety devices. Perhaps they would have been useful a year ago when the boys were walking but not very good at understanding what I said to them, or if it was an unfamiliar place, but at nearly 3, they’re able to listen when I tell them to stay away from moving cars. Plus, they’re familiar with the farm’s layout. Even though it was probably all in my head, this was the only time during this experiment I worried about other parents judging me for looking an overprotective mom.

I ended up letting go of the leads because I felt like they were restricting the kids’ ability to explore their surrounding and simply be children. As soon as I dropped the leashes, the boys’ behaviors improved. They stopped fighting me because they were no longer forced to stay so close to each other or to explore at the same speed. It actually ended up being a pretty laidback afternoon, even without the leashes as a safety fallback.

We headed to the park for a little slide and swing time. My hope was having the backpacks on would encourage the boys to slow down a little and play on the same equipment at the same time so I wasn’t sprinting back and forth trying to prevent an ER-worthy injury, but no, I’d hoped wrong.

Playgrounds are made for running amok, and the boys were annoyed at being restricted by the backpacks’ short cords. Instead of walking next to me, they pulled on the leashes and fell over when I wasn’t able to keep up with them. It may have been safe, but it wasn’t fun for anyone. They didn’t want to take the backpacks off, but I was worried about the tails getting caught in the playground equipment, so I unclipped the leashes and let the kids play freely just wearing the backpacks. I comforted myself by thinking that if they did fall, perhaps the pack would provide a little extra cushioning. And I was always nearby.

Did The Leashes Help?

Even though they delivered on their promise to be cute and keep kids safe, I probably won’t be using toddler leashes again on a regular basis. The fear of being hit by a car may be taken out of the equation but it’s replaced by the fear a child falling or tripping and getting hurt that way. The times when I was able to calm down and enjoy the freedom the leashes afforded, like at the petting zoo, were places where the kids could just as easily been allowed to roam free. And going anywhere with the leashes took much longer than it would have with the stroller.

If I was a more laid-back person, perhaps the slower pace wouldn’t have bothered me, but I found myself snapping at the kids more than I usually do, and it’s not their fault their legs can only move so quickly. All in all, I’d rather stick with stroller in situations where I’m concerned about safety and wait until they’re older and can better understand how to hold hands with me instead of trying the leashes again.