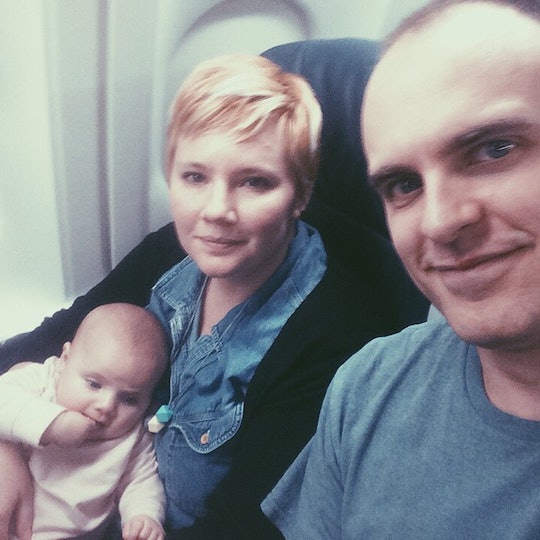 My daughter was 3 months old when we took her on her first trip out of the country. Long before I had her, I definitely thought traveling internationally with a baby was going to be an absolute nightmare. The truth is, however, that traveling abroad with a baby was much easier than I ever imagined. If not for the fact that my husband and all his family are English, I'm sure there wouldn't be a need to travel with a baby so young, but we were excited to visit family and introduce our daughter to her relatives overseas. We waited until she was 3 months old to travel to give us time to transition out of the newborn stage, but we didn't want to wait too long so that family could see her while she was still tiny. The timing also coincided with an annual family vacation we wanted to be a part of, and it gave my husband's entire side of the family a chance to meet our daughter. Even though we knew our baby wouldn't have memories of this trip, we knew everyone else would, and that meant a lot to us.

Before we got on the plane, there was tons of prep to be done, and while the idea of packing wasn't too complicated, the reality was much different. My philosophy when we go anywhere is to basically pack everything my daughter can fit into. Unfortunately, that wasn't going to work on an overseas flight with baggage weight restrictions. So I had to plan. Getting a few weeks worth of clothing all into a suitcase — including my breast pump — was quite the task.

I was nervous that I'd be so exhausted that I wouldn't get to enjoy the delight traveling abroad has always been to me. I was worried that I might be short on patience with my husband or that I might even resent my daughter for how different she made this aspect of our lives. But that wasn't the case at all.

Other than all the stuff my husband or I had to do the morning of our flight — dressing her, feeding her, getting her in and out of the car seat, carrying her through security, changing her, feeding her again, etc. — she was actually pretty easy. She slept on the car ride to the airport, she enjoyed all the people watching, and with all the stimulation prior to our flight, everything was setting her up nicely for a good nap while in the air. I remembered everything I'd read and been told: breastfeed during takeoff and landing; wear her in a sling close to you; bring a diaper for each hour of travel; stay calm, she'll follow your cues. So I did.

Boarding the flight, our daughter was happy to look around and catch the attention of strangers. She was interested in everything around her that was new and different. We picked a direct flight from Charlotte, North Carolina to London, England, a seven-hour overnight trip in hopes that all of our biological clocks would appreciate some semblance of a night's sleep. Once all was settled and the plane was ready for departure, though, she started to fuss. I asked my husband for the pillow I packed in our carry-on suitcase, one of the many comforts of home I'd brought, and began breastfeeding. She was as content as ever and ready to drift off. We hadn't purchased her own seat, so she was hopefully going to be comfortable on my lap for the long haul. I was amazed that over five hours later, which included a few turns passing her back and forth with my partner, she was still asleep. Happy that she had gotten an almost normal chunk of sleep “overnight,” I felt confident she'd be able to face a new day in a new time zone, which was five hours ahead of normal for us.

I already knew that traveling and changing time zones is taxing on my own body, but then there was the job of being a parent on top of that. I was nervous that I'd be so exhausted that I wouldn't get to enjoy the delight traveling abroad has always been to me. I was worried that I might be short on patience with my husband or that I might even resent my daughter for how different she made this aspect of our lives. But that wasn't the case at all. I communicated to my husband prior to our trip that I was going to need him to be on his game and aware of any way I might need his help, and our teamwork made all the difference. As for traveling being different now with my daughter in my life, I've realized that it's hard to resent her for anything when she actually just helps me see things with fresh eyes. It's as if I'm getting to experience everything for the first time all over again.

Breastfeeding helped keep her secure no matter the new places we went. I also brought with us things that would remind her of home, like the activity mat she's obsessed with, and I think having it in the floor of my in-law's living room must have made her feel more at home.

Even though my partner and I didn't get much sleep on the plane despite the fact that our baby had slept, we were all excited once we were ready to exit the airport — and probably operating on adrenaline — since we were about to see family. We had another two-and-half hour car ride to our destination, but since she was comfortable in the car seat we'd brought from home, my daughter was fine. I pushed past my own tiredness and greeted each new environment for her with cheer and excitement, and I believe that helped her to remain calm.

The next few weeks of our stay in England were a whirlwind. We visited all the family and friends we could pack in keepin a much busier schedule than we usually do at home. Surprisingly, our daughter wasn't disturbed too much about the new surroundings, and she happily went wherever we took her. She'd last a couple of hours wherever we were then either fall asleep on the car ride to the next place or take a nap on a blanket or on someone's lap. Remarkably, she kept her normal night-time routine of sleeping for about six hours, waking to breastfeed, and then sleeping again for another few hours.

I feel confident that breastfeeding helped keep her secure no matter the new places we went. I also brought with us things that would remind her of home, like the activity mat she's obsessed with, and I think having it in the floor of my in-law's living room must have made her feel more at home. Her adaptability to change at that age — since she wasn't fully able to perceive new people and places — were major points to our advantage in traveling with her then, too. The same trip might look very different with her now that she's almost 8 months old and can realize when she's being held by a stranger versus a family member. She's also much more mobile and curious now. When we traveled abroad five months ago, she wasn't even able to roll over yet, so sitting in our laps in airplane seats probably wouldn't be as easy as it was then since she's desperately trying to crawl all the time now.

Like I thought about most things before becoming a mom, I saw it as this huge, daunting task. But treating this experience with joy and positivity actually helped build up my own self-confidence.

The flight back was a pleasant surprise to us, because even though we hadn't paid for our baby to have her own seat with her car seat in it, there were enough free seats on the plane that they let us bring it on board instead of stowing it with the luggage. It was wonderful to have our hands free, and I think she enjoyed the extra room, too. Though she didn't sleep as much as she did on the first flight, it still went better than I expected.

I had no idea that when we traveled internationally with our 3-month-old daughter that it'd be one of the easiest trips we'll probably ever take together. Like I thought about most things before becoming a mom, I saw it as this huge, daunting task. But treating this experience with joy and positivity actually helped build up my own self-confidence. We'll likely be traveling back and forth between my American and my husband's English families, so our child and any future children are going to grow up traveling a lot. I never want it to be a tiresome, stressful event for her, so I'm taking everything I learned on our trip to heart in an effort to keep the act of traveling not just a positive experience for her, but a genuine adventure for all of us.