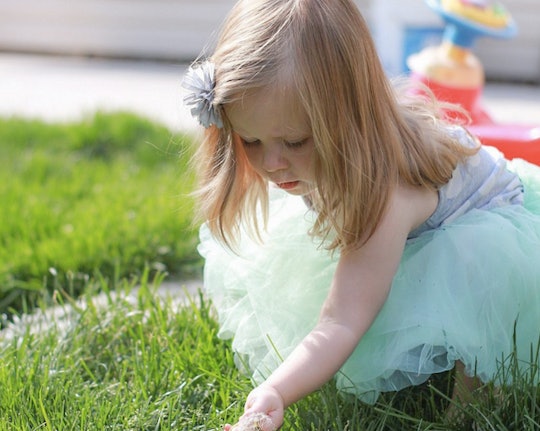 I Treated My Daughter Like A Damsel In Distress For A Week, & Here's What Happened

Sometimes I feel like my daughter gets a little bit of rough treatment being the middle child and our only girl. I want to make sure she grows up strong and independent, so I am careful to treat her equally with her brothers. We don’t coddle her when she falls down. She gets time-outs when she misbehaves. She has to keep up with her older brother, which can often be a hard task. My partner and I don't want to raise her to believe she should be treated like a princess. I don't want her to think there are different "rules" for girls and different expectations for boys. And we expect the same from our sons.

Already our daughter is wildly independent and a force to be reckoned with. She’s more reckless than the boys; strong-willed and stubborn about doing everything herself. She prides herself on doing the things her older brother does, like jumping off furniture and climbing cabinets and running full speed until she crashes into the ground only to pick herself up and say, “I’m tough.”

I wondered how different she would be if we treated her more like a princess, dramatizing her boo-boos, saying yes to her every whim, and overvaluing her sweet, girly side. I decided to try it out for a week, giving her the princess treatment she never gets. I wanted to see if it really made a difference, or if her take-no-prisoners personality would shine through regardless of pampering and coddling.

And let me tell you, I wasn't exactly ready for what happened.

On the first day of her damsel in distress experiment, my daughter was outraged to find her breakfast plate and fork set in front of her. She likes to help put her waffles in the toaster and pick out her spoon. As frustrating as it was, I was glad to see her independent side was still shining through. She was resistant to her clothes being picked for her, her food being decided for her, and any help I gave without being asked was met with a lot of disdain. I felt a sense of accomplishment when I saw how angry she was when she couldn’t be independent. it made me feel like I was doing something right, and that her strong personality had been bolstered by my parenting style.

On the second day, I had to “rescue” her from her brother, who was admittedly being totally mean to her. However, when I whisked her away, I ignored the fact that she wasn’t completely blameless in the situation. She was messing around in his room, touching things without asking, and his yelling, although not nice, was sort of understandable. My son knew it too, and was outraged that I “saved” her without acknowledging her role in their fight. I could definitely see how treating an only daughter like a princess could result in some nasty sibling rivalry.

Right now, they fight a lot, but I at least try to treat them equally and not constantly blame one over the other. Picking a princess means picking a victim and subsequently a villain, and that is a recipe for some seriously unhealthy relationship dynamics down the line.

The rivalry continued on day three, which came as no surprise to me. My daughter is an instigator by nature, so when her big brother got out his guitar, she decided mid-song would be a great time to touch it. When a fight escalated immediately, I once again whisked her away to her bedroom and sat down to read a book with her. She was less upset about being removed from the situation as victim today, and rather enjoyed the one-on-one attention she was getting every time she started a fight. She did it a couple more times, and started to realize there was a connection between distress and the special treatment I was giving her. Her big brother realized it too, and began acting out in an attempt to even the playing field. I let him stay up a little later to get some one on one time too, but I was exhausted from having to juggle the different treatment I was giving to each of them.

While I admired my daughter’s intuitiveness in figuring out how to play the system, I was not looking forward to the rest of the week.

By day four, my daughter didn’t even pitch a fit when I got her meals and cutlery for her. Her interest in doing everything herself seemed secondary to starting trouble so she could be “rescued”. As much of a pain as it is to watch her slowly do everything for herself (and often make a massive mess in the process), it was far more concerning to watch her not care about being independent. I was worried about the message I was sending to her, and to her brother each time they fought.

For the first time, I was treating them differently and it seemed to make their fights much more frequent and intense. Luckily big brother was off to visit his grandparents for the remainder of the week that afternoon so she could get the princess treatment alone, without having a confusing power dynamic at play.

On the fifth day, I was able to give my daughter the full princess treatment. Instead of craving her independence, she seemed content to request different foods all day and not eat them. Instead of rummaging through the drawers for the correct fork, she would tell me which one she wanted and wait for me to get it for her. She wanted book after book read to her in order to put off bedtime. Even though I was still worried over how her independence was waning in the face of this experiment, I noticed a lot of her behavior was stemming from wanting more attention.

Even though I try to distribute my time and treatment of my kids equally, as the middle child who is more independent, she doesn’t always get the attention she needs. It was a total wake-up call for me that I could (and should) give her this sort of undivided attention more often. She doesn’t need to be treated like a princess, but she does need to know that she’s special and unique from her brothers.

On day six, I tailored the day around my daughter. Since her brother was out of town, it was easy to cater to her. I took her on a trip to the discovery museum and out for ice cream. I got her a special headband when we went to the store. I spent time reading with her. Overall, it was really nice to spend a day with her as the main focus. However, I noticed that whenever we came across something even remotely difficult at the museum, she would ask me for help. Normally, I would encourage her to try again, perhaps giving her tips to figure it out on her own. I realized that treating her like a damsel in distress was robbing her of the chance to problem solve.

By the end of the experiment, I was beyond ready to stop treating my girl like a damsel in distress. I knew she was fully capable of doing things for herself, problem solving for herself, and being treated just like everyone else. I tried to make our day as minimally damaging as possible, not drawing attention to the things I was doing for her and helping when she asked without fanfare. I was beginning to think she was changed beyond recognition until we started doing a puzzle and she threw herself on the floor screaming every time I helped. At least some things hadn’t changed. I think she was also ready to be done with the week. I could sense her becoming listless over the monotony of her damsel days. She has too much to do, too much to learn, to spend her days being coddled.

I was utterly shocked by how much my daughter’s behavior changed over the course of a mere week. By the end of the experiment, I wished I’d never started in the first place. Even though she quickly went back to her independent self as soon as I asked if she’s like to help make breakfast the next morning, I felt like I had taken a week of learning and growing and problem solving away from her by treating her like a princess. There was nothing healthy about giving her special, coddled treatment. It put a disparity between her and her brother. It stole her independence. It sent the message that she didn’t have to earn her way in the world, that she could get by on tantrums and the expectation for others to take care of her.

If this week taught me anything, it’s that I don’t want to raise a damsel who needs saving. I want to raise a woman who can take care of herself. She’s well on her way, so long as I keep teaching her to embrace her independence and do the saving herself.

More Like This
12 Helpful Tips For Hiking With Kids
15 Adorable CoComelon-Themed Costumes You Can Buy Or DIY
6 Mindfulness Activities For Kids
What Age Do Kids Start School? Here’s What You Need To Know