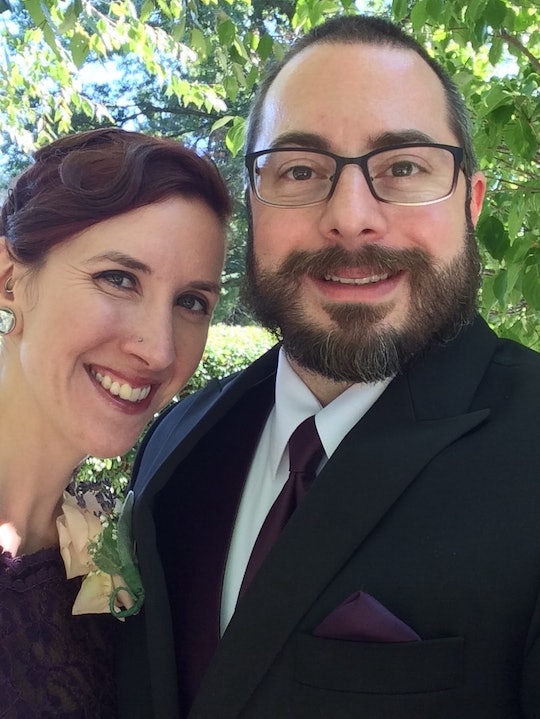 A few months ago I shared a now infamous article with my husband entitled "I Ate a Doughnut Off My Boyfriend's Penis and It Was Awesome" — and yes, the gist of the piece is exactly as it sounds. Maybe you didn’t need to know giving guys a blow job with glazed donuts is a “thing,” and maybe you didn’t need to know I shared said piece with my husband, but the article itself is imperative to this story. My husband didn’t ask me to blow him with a baked good, but he did respond by saying, “Oh man! When do you get to write articles like that?”

I laughed and responded, “I’m sure if I pitched a sex piece to my editor she will pick it up.” Ironically, I didn’t have to pitch anything. A few weeks later the idea for this piece — an article in which someone was supposed to have sex everyday for a week in a different position — came into my inbox. I told my editor I'd take it on, and a few moments after I sent my response she replied, “I sent these out hoping you'd pick the sex stuff up!” And while the things changed a bit — thanks to a few unforeseen surprises — we gave it our best shot. Well, six of our best shots.

The idea was simple: We were to have sex at least once a day for seven days days, and each day/session was to be in a different position. Easy peasy, right? Well, sort of. We have a toddler, we both work, and my husband’s job often keeps him in the city late. Add one shoulder injury and a few (seemingly endless) colds to the mix and, well, in order to stick to the schedule, we had to get creative. Because of a few hiccups, it ended up being six positions in seven days, but hey, we tried.

The missionary position gets a bad rep because it is seen as 1) basic, 2) boring, and, 3) well, sort of blah. But it doesn’t have to be. It's one of the most comfortable sex positions — for both parties. And you can modify it a little bit (like above) so that "boring" missionary doesn't feel all that "boring" anymore. It's familiar and versatile, and it's both intimate and romantic. (If I’m being honest, there is nothing like kissing and coming.)

So how’d it go? Great. I mean, my husband and I were both very excited to get this experiment started (shocking, I know). We were looking forward to spending intimate time together — something which we tend to push to the back burner amidst the chaos of work, parenthood, and life. And I was intrigued by the idea of taking a more commanding role in our sex life (something my husband’s yearns for, though I still shy away from). This wasn’t a new position, and there weren’t any surprises, but it was an enjoyable way to start our sexcapades.

Our "second position" was a variation on the first: the coital alignment technique (or CAT, for short). The premise seemed simple enough: We were to start off in missionary position — you know, I would be laying down and he would be laying on top of me — and then he was supposed to pull his body up toward my head, so that his pelvis was slightly higher than usual. And then, instead of thrusting in and out, he should focus more on grinding against your pelvis. He was supposed to rock side-to-side.

As Vanessa Marin, a licensed sex psychotherapist based in San Francisco, explained on Bustle.com, the coital alignment position is great for women:

Despite the clinical-sounding name, this is a great position for a lot of women. Changing the alignment of your pelvis allows for his pubic bone to rub up against your clitoris and deliver the kind of direct stimulation that most women need to reach orgasm. It’s great for women who are shy about trying a bunch of crazy positions, since it’s extremely easy to maneuver into from the traditional missionary. It’s intimate and low-stress at the same time.

Perfect, I thought. This is perfect.

Unfortunately, it wasn't. The pace was a bit slow for my liking — and his. Penetration was minimal and meh — and, yes, that is a clinical term — and overall it was bit too subtle. A bit too boring. A bit vanilla. (Seriously, I don't think we made it more than two or three minutes before we gave up; well, before we switched things up.)

Of course, after our failed attempt I read the coital alignment technique "may be a bit frustrating for him (or both of you) at first, as it requires a slow and steady rocking that leads up gently to a powerful orgasm," at least according to SluttyGirlProblems.com. But I'm still not sure I will try it again; it just wasn't my "cup of tea."

For those who don’t recognize the “sofa brace” by its name, perhaps you will recognize it by the position itself (above). In short, the “sofa brace” is a variation of doggie but instead of being on all fours, your body is draped over something (your bed, a chair, or a couch cushion). What’s this mean for the woman? All the penetration of doggie with zero work! OK, I’m kidding (half-kidding) because this position wasn’t only great for getting me off but it was incredibly comfortable too.

As for “day three” of our experiment: Since I was still turned on from the previous nights, I sat around — in a fairly aroused state — most of the day. We chatted about our the previous nights sex that morning and we sexted about the upcoming evening that afternoon. I was turned on by the conversation and excited by the anticipation. And since the day ended with multiple orgasms how do you think it went?

Full disclosure: Doggie is my favorite position. (Sorry to any family members who may be reading this ... though if you’ve made it down this far, it’s not really my fault.) This is the one position that always enables me to orgasm from penetration alone, and this is the one position where I feel comfortable letting my freak flag fly. What is that you say? You want to do it on the balcony? Well, OK. And on this particular night a simple bandana turned blindfold allowed us to really turn things up. (Though you’ll have to use your imagination a bit; I’m not giving all the details away!)

Whether this was the day we hit our groove in the experiment or this just the perfect night, I don’t know, but this was — hands down — the best sex of the week, and probably the month. Even better, by the end of day three my husband and I were more connected (physically and emotionally). And whether it was the sex itself or our anticipation of the act I cannot be sure, but we were talking more, fighting less, always hugging, and always remembering to say "I love you."

This may come as a surprise — what with our 13-year sexual history — but my husband and I had never tried reverse cowgirl prior to this experiment. We'd tried using all kinds of toys, dabbled in exhibitionism, and even played games that involved contorting ourselves into some crazy Kama Sutra poses, but this was one we just missed. So when I selected it, I was excited: excited because it was something new, something different, something empowering (i.e. a pose where I would be in control), and something with the potential to be amazing and — like previous nights —mindblowing. I was thrilled by the novelty of it all and eager to see if this position was as great as some claim it to be.

Unfortunately, reverse cowgirl didn’t do it for me. (And it wasn’t his favorite either.) Maybe our angle was off or our heads weren’t “in the game” — which, if I’m honest, may have been part of my problem. Maybe it was the time of day, or our lack of foreplay, but by day four, I was tired; with a to-do list a mile long, having mind-blowing sex wasn’t exactly on my mind. But whatever it was, something wasn’t right. And while I may try it again, it isn’t something I’m going to jump right on. (Oh yeah, pun totally intended.)

As day six dawned, I wondered what we would do that evening. I considered scouring the Internet for something wild — some hang-off-the-ceiling type of sex — because I wanted this experiment to go out with a bang, but I decided not to. I was busy. Work and laundry, dishes and deadlines, and caring for another little human took up all my attention. I was tired. So instead I texted my husband two words, “cowgirl tonight?” and he responded “okiedokie.” (Don’t judge our sexting game!)

I knew I liked cowgirl, I knew he liked cowgirl, and it seemed like the perfect way to truly take control — something I often want to do but shy away from because I am conscious, anxious, and insecure. I am afraid I will somehow f*ck it up. The good news was that I didn't. We had another awesome sex session, and another post-sex snuggly sleep. And an unexpected bonus from all this sex was that we were both in bed — together — by 11 p.m.

What Did A Week Of Sex Do for Us?

After the experiment was over, I had mixed feelings. We'd had some great sex, like, seriously great sex over the course of seven days, but some nights were just meh. Some nights were awkward and some propositions seemed strained, especially "doing it" after a fight or on a day where I was really struggling with my depression, and myself. (Don't get me wrong, make-up sex can be un-freakin-believable, but sometimes my mind isn't in the game — with or without a fight — and sex is so much more than what happens between your legs.) And whether it be my mindset, the positions, or the “routine,” I’m not entirely sure, but I was relieved when the experiment was done. Relieved, but not happy. Plus, having sex every night was hard. We didn't even make it to seven nights because life just got in the way.

Even though some nights were tough, even though I struggled to be in the proper headspace, and even though I wasn’t always in the mood, the act itself always managed to turn it all around. I was able to focus on my needs and my partner's, and it forced us to be together (in the best way possible.) And in a world of constant distractions — to-do lists, push notifications, and a toddler (love her, but sometimes kids zap us of all our strength) — six nights of sex with my partner was a welcome change of pace. It was great to touch each other, to hold each other, and to love each other.