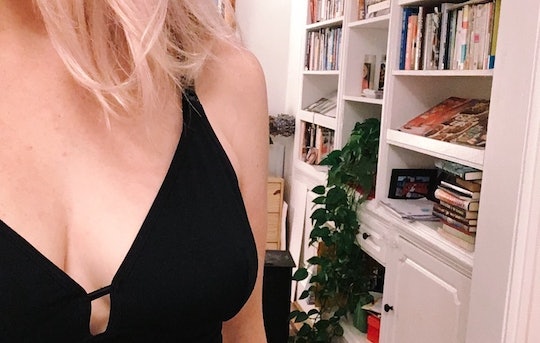 I Tried The "Sexy" Breastfeeding Bodysuit, & I Have A Lot Of Questions

I enjoy the idea of maternity clothes because they ask the question: are you Jennifer Lawrence in American Hustle or Jennifer Lawrence in Winter's Bone? You can either shimmy into something skin-tight that makes your bump a bodacious accessory, or fashion a tent-dress out of an old tarpaulin and let your eyebrows go to seed. Those are the options while you're pregnant. "Postpartum" clothing, after you've delivered, isn’t ever marketed as such; it’s either nursing attire — with unclaspable boob doors — or maternity clothing that you’re still wearing because after delivery, you still look like you're in the second trimester. The best nursing attire I have ever found is not glam: racerback tanks and plaid shirts mostly. Nursing bras are like orthopedics for your boobs. I have yet to be impressed by a nursing bra. Enter the breastfeeding bodysuit. Is it comfy? Practical? Does it... sex? I decided to find out.

Lively have put out a new range of undergarments — underwear, as we tired parents call them — and the bodysuit is the sort of level-up of breastfeeding-wear. The garment is black and silky soft — it has the magic feel of an invisibility cloak when I touch it. It's the kind of underwear I imagine a serene new mom wearing as she nurses in one of those hanging basket chairs, speckled in confetti sunlight. I like the idea of it very much.

The butterflied, unlined bra cups are separated by a diving neckline and joined by a string of black, for a sort of balletic look. Seeing myself in it, I recall the one time I tried a Pure Barre pregnancy workout on DVD. I woke up the next day with my calves perpetually locked into a Scream face. This is to say I am not the most balletic, but the bodysuit looks nice on.

My biggest question is: Why a bodysuit? On some level, it makes sense — there is no midriff exposure like you would have between bikini bottom and bikini top — but on another, there is no solid demarcation between the upper and lower, so the contraption works perfectly on my body to draw my boobs down and exert a certain amount of tension on my butt crack.

I wonder if I should be wearing underpants under the bodysuit, then realize I have a toddler, a baby, and a dog, and I don't need to make my life any more complicated.

I worried for a minute that I would have to peel the bodysuit down each time I used the bathroom, thinking already of the struggle when I venture out wearing my Ergo over a pair of overalls. But the bodysuit smartly has snaps in the crotch. There are three snaps. Despite having spent the past 11 months pinching baby snaps together on my son’s attire, I can’t get these done back up in the bathroom. I try angling one arm in front and one behind, and imagine it must look like I’m trying to climb through my own hands. Eventually, I line them up and get a solid connect.

It feels strange to have metal parts near your delicates, after all the cutting and stitching you've gone through. I wonder if I should be wearing underpants under the bodysuit, then realize I have a toddler, a baby, and a dog, and I don't need to make my life any more complicated.

I am still nursing at 11 months, which I consider a small victory against the demands of office work, but it means my boobs are not the volleyballs of the newborn period. Rather, they have the collapsed look of oxygen masks dangling inside the cabin of a plane. Often when I wonder if my son is actually getting any milk, I remember those safety demos that have been drilled into our subconsciouses: Bag may not inflate but oxygen is flowing.

Putting boobs such as these into a soft fabric canopy is like sitting a baby at the top of a slide and telling them to stay. It's a wish you utter then let go of like a helium balloon on a soccer field.

The bodysuit has a clasp for you to unhook the boob sheath. But the garment is stretchy like an aerobatic silk — my 11-month-old needs no special access to get his hands on the milk. He is at the stage where he can help himself. I mean the man is already carrying a brief case.

If you are nursing, you, like I, will have reached the point where you decide to forego "nursing bras" for a stretchy racerback sports bra from the Victoria's Secret Pink collection circa 2004. This is what the bodysuit is like. Young and overconfident.

I cradle my son like a squealing ham hock, then attempt to get to the clasp. While I'm fumbling with the hitch, he does this.

"Out of my way" — my son to the bodysuit's soft, elastic fabric as he latches himself. He is at the point where he will sometimes nurse in a spinal twist, or half standing up and front-on, leaning against me like a little Danny Devito.

I wear the bodysuit with some yoga pants over it while at home with my husband after bedtime.

"Hey," I say from my couch to him over on the other couch. "Want to have sex?"

I say it as a real question, like I'm not sure either. He has a think, then makes a tired face, like I've asked him to set up a badminton kit in the living room.

So its sex-giving powers are minimal. I'm torn. On the one hand, this is the only new piece of underwear I've gotten in over a year, and the feel is so soft, so silky, such a nice idea. But on the other, the unhooking bra and the jaws of the crotch snaps make me feel way too exposed. There are too many entry points.

Some women need a confidence boost to feel more fly in the postpartum stage, and some need their doctor to write a prescription for flannel pajamas.

It's been 11 months since I butterflied my legs for a room of hospital staff, and 11 months of baring my breasts whenever my baby decides he wants a snack. My honest desire is to wrap my body up in a thick compression jumpsuit, like the Thundershirts you put on anxious puppies.

The long and short of it is that some women need a confidence boost to feel more fly in the postpartum stage, and some need their doctor to write a prescription for flannel pajamas. (My OB literally wrote a "prescription" to my husband at my six-week checkup for him to watch the kids so I could go jogging; not all heroes wear capes.)

The bodysuit is a beautiful idea for the mom who is ready to unclip her hangups and move into a slightly foxier zone. But if you want to just wear it while you eat cereal for dinner and watch The Sopranos, that's fine too.

More Like This
Pinterest Predicts Their Top 2023 Trends In Parenting, Beauty, Fashion, Home, & More
What To Know About Your C-Section Shelf
Festive Mommy & Me Holiday Nail Ideas To Try
The “Tripledemic” Is Scary, But I Feel Less Helpless When I Wear A Mask