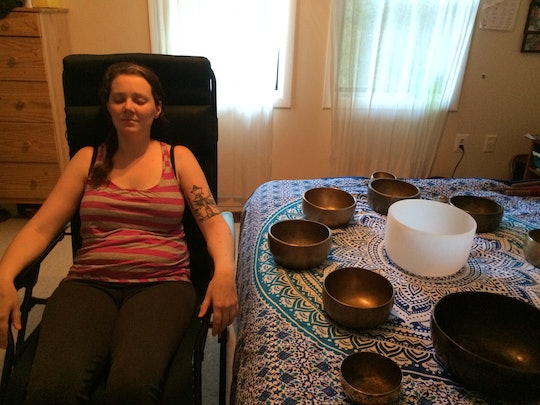 I Tried A Sound Bath To Treat My Anxiety, & It Actually Blew My Mind

I'm always feeling like I should be doing something more, whether it's working out, sleeping, cooking, or playing with my kids. I suspect a lot of moms feel this way, but I think this need to constantly be active also stems from my lifelong struggles with anxiety and panic attacks.

With this in mind, lately I've been trying to make more time for relaxation and meditation, even if it's just for 10 minutes a day. In my quest for making time and space to do that, I heard about something called a sound bath. I was equal parts intrigued and skeptical, but I thought it would be worth a try. So I tried a sound bath to treat my anxiety, and it was an incredibly mind-blowing experience.

A "sound bath" sounds like a fancy spa treatment, and that's actually not too far off, except it doesn't actually involve water or bathing. It's part listening exercise, part meditation where you lie down, relax and let various sounds wash over you. Traditionally, these sounds are made live with Tibetan singing bowls, a type of bell that looks just like a metal bowl, gongs, tuning forks, or drums. These instruments are carefully tuned to play pure, sustained notes.

As a music and physics geek, this is incredibly interesting to me, so I decided to try it. I found a local practitioner who could bring the bowls to me. Robert is from Human Activation, a local group dedicated to teaching people this ancient practice of meditation. He arrived at my house with about 15 bowls. Honestly, I was pretty nervous. I've had maybe three massages in my entire life, and only one of them was relaxing, because I found myself preoccupied with what I should be doing. Do I close my eyes? Do I chat? This was similar. I knew I would be silently lying down with my eyes closed, but even this made me nervous. The whole idea made me feel self-conscious and vulnerable.

Robert, however, put me at ease right away. He explained that some of the bowls he uses are anywhere from 200 to 500 years old. He reverently laid them out on a beautiful mandala cloth, while describing how many artisans had come together to mine the metals and forge and tune each bowl. He also told me that the bowls were often tuned in a way that mathematically mimicked the alignment of the planets by taking calculations about the planets' orbits around the sun and applying them to the frequencies of the bowls. He talked about alchemy and crystals and a lot of stuff that even I, as a fairly crunchy, open-minded person, found a little woo-woo. But he also said that people were more relaxed after meditating with sound.

When we got started with the meditation, he played along with a track of what I can only describe as spa music mixed with nature sounds (and I recognized one track from Lord Of The Rings). But Robert told me it was all improvisational. He liked to be in the moment with the meditators and get a feel for what they might need. I liked this idea. It felt like even though I was being passive, I was an active participant in my therapy.

Since becoming a mom, I find even trips to the dentist a treat. It's amazing to lie there with someone doing something for me, without me having to take care of anyone else.

He brought a comfortable reclining chair, and we were ready to start. At this point, I was comfortable enough with him and his process that I was able to relax. He played a gong that signaled the meditation was beginning, and I set my intentions on being open-minded and to enjoy this time to myself. Since becoming a mom, I find even trips to the dentist a treat. It's amazing to lie there with someone doing something for me, without me having to take care of anyone else.

As his music track started and he began playing the bowls with these long, drawn-out tones, I found that I was hyper-focused on listening. As a musician, at first I tried to identify the pitches and their relationships to each other, but pretty soon, I wasn't thinking as much about it. Once the music began to wash over me, I found that my thoughts slowed down and even my eyeballs felt relaxed in my head.

I'm an anxious person, and I often feel the anxiety in my body. Prior to beginning the meditation, my stomach did feel a little heavy, but that feeling totally dissipated. The music started to feel more like a landscape than a linear experience. Sometimes, Robert would be playing multiple bowls loudly, often very close to my head; other times, I would hear only the faint leftover vibrations of the bowls. At one point, I worried a bit about my stomach gurgling.

When the meditation was over and I was slowly wiggling my fingers and toes and opening my eyes, I realized that I felt more relaxed than I can ever remember being. I felt good.

I can remember one specific moment when something about the combination of the pitches I was hearing felt extra special. It was beautiful and loud and a bit overwhelming. It felt like I was wrapped in a giant warm blanket, like I had become one with the music.

Is this working?, I wondered. Am I feeling what I'm supposed to? But when the meditation was over and I was slowly wiggling my fingers and toes and opening my eyes, I realized that I was more relaxed than I can ever remember being. I felt good.

The sound bath lasted about 45 minutes. When Robert first told me it would take that long, it sounded like a long time, but the time flew by. When I was coming out of the meditation, I felt like it had been over too quickly. But I also felt incredibly well-rested, as I would after a good night's sleep.

I have been in therapy for anxiety and panic disorder on and off for 10 years. My body has learned what it feels like to be afraid and panicky, but Robert was telling me that it can also learn what it is like to be relaxed and calm.

When Robert and I started talking about my impressions, I told him about that moment that felt transcendent. He nodded knowingly and told me to take a moment and remember that moment, to try to imprint it in my memory so I could recall that sensation if I ever needed it. That really struck a chord with me (no pun intended).

I have been in therapy for anxiety and panic disorder on and off for 10 years. My body has learned what it feels like to be afraid and panicky, but Robert was telling me that it can also learn what it is like to be relaxed and calm. I knew that I would be recalling my sound bath meditation the next time I felt tense or anxious.

Most sound baths are communal experiences set in churches and yoga studios. Robert said that his set-ups for those events are even more intense and involve crystal installations. As skeptical as I am of the power of crystals, I am curious to try a group meditation. I wonder if I'd be distracted by the other practitioners, or if I'd feel more connected to other people being surrounded by all that calmness.

I will definitely be giving sound bath meditation another try in the future. I don't think anything magical or mystical necessarily happened, and I don't know if everyone would enjoy lying still and just listening to bowls for almost an hour. But I am so grateful that I was given an opportunity to experience it. I am grateful for that wonderful moment I can always revisit in my mind.