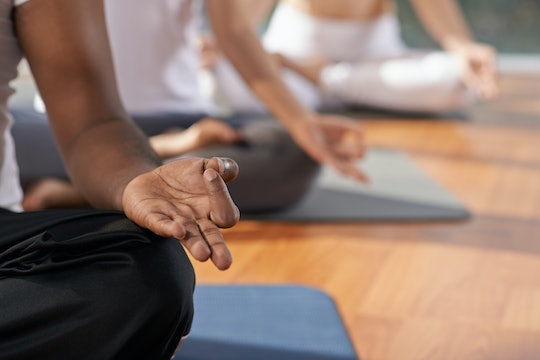 I Tried A Womb-Cleansing Ritual & I Left Feeling Confused

Writer Rochaun Meadows-Fernandez dives headfirst into the scientifically unverified practice of womb-cleansing. Note: No, this does not involve beads, and you are strongly urged not to involve them either.

Nearly two years after the birth of my first child, I wanted a change. I’d breastfed him for a year and a half, and when my periods returned they were all over the place and ridiculously painful. We’d been passively trying to have a child for quite some time but the pain that I felt with heavy and inconsistent periods made me feel like something was wrong. I had cramping nearly every part of the month and I thought I was broken.

The same week as the first “real” period, I made an appointment to discuss causes and remedies with a gynecologist. To her, the most effective way to find the cause was via ultrasound. For the most part, everything seemed normal, aside from a few fibroids that, according to her, were likely too small to be the source of my pain. Next, she suggested a laparoscopy, a procedure where a small camera is inserted and used to look at the uterus and surrounding areas, so I scheduled an appointment but chicken out. The risk factors were small but it wasn’t a gamble I was willing to take just yet.

After a few more months, my system seemed to regulate itself and I was back to my normal, moderately painful periods. I wanted to do things differently this time and often live on the homeopathic side of life, so I decided to make the switch from pads to menstrual cups. It was love at first drop and I was equally as excited to add period panties to my monthly routine.

I was NOT prepared to see at least 60 other women and gender-nonconforming individuals (nearly exclusively white) of all ages, stages, and parent statuses with sleeping bags and pillows hugging each other and holding each other’s hips.

There I was, living my fullest crunchy life, when my local Unitarian Universalist Church — those are my people haha — posted a flyer for a “womb cleansing” that would be held in a few weeks. I knew I had to go. It matched with everything about me. I excitedly PayPaled my fee and prepared myself for the forthcoming powerful spiritual experience. I couldn’t wait to feel better as the steam from the pot warmed my body, yoni, and soul… but there was one problem. I’d mistaken a “womb cleanse” for a yoni steam, and I’d soon be equal parts disappointed and confused.

Work was heavy that day so I got caught up at the library trying to meet some deadlines. However, I was NOT prepared to see at least 60 other women and gender-nonconforming individuals (nearly exclusively white) of all ages, stages, and parent statuses with sleeping bags and pillows hugging each other and holding each other’s hips. Right about then, it occurred to me I was in the wrong space but I’d paid my money so I decided see where things would go instead of run.

Have you ever been in a strange situation where you were clearly out of place but instead of being uncomfortable, you felt humored? That was me. I knew on the surface that these people had similar spiritual beliefs to my own. However, as I’ve seen time and time again, cultural differences made it hard for me to feel like I belonged.

For me, spirituality means honoring higher beings by working hard to respect all life forms. I couldn’t help seeing the irony of a room full of spiritualists and self-proclaimed witches who have claimed sacred signs that belong to Native Americans, wore tees with African American vernacular printed in loud graphics, and thought dreads belongs to anyone who fancies them, provided they attend a church that actively fights cultural appropriation and injustice.

I thought I’d finally be OK when we were allowed to have sacred time to center ourselves and feel the energy around up. But I was severely off-base. Our quiet time and deep-breathing was a time of self-expression and many, particularly those who sat in my area, choose to moan and sometimes grunt loudly. I knew I couldn’t be mad. This was a place for individual comfort and expression. It just didn’t work for me and I couldn’t help but laugh.

A combination of stretches, breathing, and vaginal contractions were supposed to make our wombs like new.

Once we got into the main exercise, I was excited I would finally have the spiritual experience I craved, but couldn’t help chuckling to myself at the facilitator’s choice of music: Bonnie Tyler’s “Total Eclipse Of The Heart.”

As this throwback tune played loudly, we began preparation for the main event. We began with deep breathing and setting our minds on the trauma we’d experienced during the years. Even I was forced to focus long and hard deciding if I wanted to spend more time thinking of my husband — with who I wanted to love and grow — or a truly traumatic past relationship I wish to erase from mind forever. Naturally, we were only allowed to pick one and I couldn’t choose between my extreme disdain for my P.O.S. first love who took a huge crap on my hopes of anxiety-free love or husband, who I loved deeply but still gets on my damn nerves from time to time.

I probably would have been able to focus better if 1) I’d brought a sleeping bag or pillow like everyone, or 2) I couldn’t feel my period starting unexpectedly sans menstrual gear. But who knows, maybe that was the cleansing at work? *shrugs*

In retrospect, my lack of selection of which of the male folk annoy me the least was too hard of a choice. Our deep breaths were supposed to include visualizations manifesting in cutting ties with the past or resolving fights with the current — whichever was more of a frustration for us. But when the assistants who were using their energy to palpate our bodies and give "emphasis," I was so distracted by the temple rub down I couldn’t focus on anything else. Thankfully, this energy work involved clothes or I would have had to explain goose bumps and weirdness.

The manifestation lasted about 30 minutes and a combination of stretches, breathing, and vaginal contractions were supposed to make our wombs like new.

I can’t remember the facilitator’s title, but her heavy accent proved she wasn’t from the United States. She was dressed beautifully and glowed with divine energy but I didn’t feel moved by the process. Many of those around me were moved to tears but the majority of the time, I felt nothing. I and my womb were out of our element. I wondered if it hindered my ability to connect.

Looking back, I feel a bit fondly about having a space where weirdness was accepted, if not celebrated. We’re all “othered” one way or another, and I didn’t have time to allow a blindness to cultural sensitivities keep me from trying something new. Despite what surrounded me, I had the opportunity to center myself and focus on the power of my feminine energy — and that’s what I came for.

Did the experience go how I expected? Hell no. Would I do it again? I’m not sure. It was the kind of weird that makes you smile to yourself, not that kind that scars you for life.

I’d still have to find that yoni steam, though. Cause womb cleanses don’t seem to be my thing.