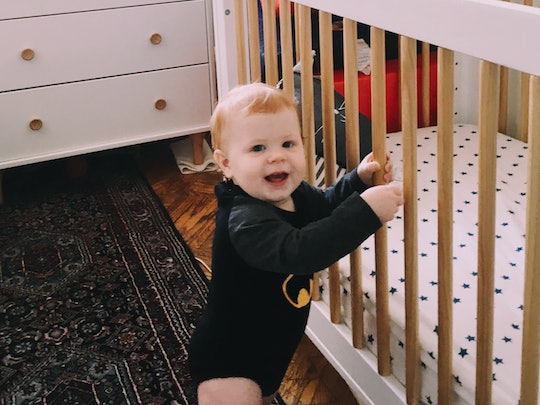 I Tried Baby Magic Calming Baby Bath, & "Calming" Isn't The Word I'd Use

The first night I used Baby Magic Calming Baby Bath, my daughter tantrumed so hard at bedtime she threw up on herself a little. I don't blame the bubbles in the least; at bedtime, we all get a little loony. I've read that the day's experiences aren't properly encoded until we begin to dream, and imagine my kids vibrating and roaring like an overheating hard drive as we try desperately to calm them down with books and milk and snuggles. Parents the world over are constantly looking for a miracle cure for children who can't sleep [that isn't whisky]. At the higher price point, this means Dock-a-Tots and night nurses; at the low end, it means calming lavender bubble bath.

When I came into possession of Baby Magic Calming Baby Bath, I thought: well sure. Even if you don't believe the medicinal properties of lavender and chamomile, or in hypoallergenic purple-colored toiletries, free bubble bath is something you don't say no to. We go through a lot of bubble bath because I'm not entirely sure how to clean my kids. We do a bit of a wipe-down with the washcloth, but I mostly assume the bubbles will just dissolve away the day's dirt. That's how I was raised. The bubble bath is recommended "before nap time and bed time" and for the first few days I kept calling it "Magic Baby bubble bath" before realizing I had to expect less of my kids. It smelled really nice, like fresh pajamas kept in a drawer with that scented liner paper. The bubbles were a reputable diameter. Top-shelf, really.

I kept detailed notes of my first week using Baby Magic Calming Baby Bath, being sure to mark down any moments of calm. I have a 10-month-old son and a 2-year-old daughter, and both of their baby albums are woefully incomplete. If this goes OK, I thought, I can just paste these notes into their memory keepers.

Here's how it went.

A thing to know about my 10-month-old son: he prefers to bathe standing up, as if he's a gold rush prospector in a metal tub tossing water over his shoulders. Another thing my son enjoys is dipping his butt while standing — dancing, in other words. He's a slippery upright dancing baby with out-turned feet. It's great. You have to hold his arms the entire time, which means he does little double axels when his feet slip. I look fondly back on the early days when bathing him was more like holding a squinting bar of soap.

He doesn't appear to notice any difference on this, night one of Baby Magic bubble bath. He is very busy looking for secret footholds in the wall, and I know the bath is over when he begins to cry. My daughter has been pouring water from a green cup over his back, each time edging higher, seeing if I'm watching before trying to dump it on his head. "Japhy doesn't like water being poured on his face," I remind her. "Oh," she says.

We dress and attempt to read a story while Japhy twists around, diving after invisible foul balls. I try to nurse him, and when he bites me, I announce, "Good night everyone!" and lay him in his crib. He rubs his eyes, tucks up his bum, and goes off after one little "whaaaa."

Scout is upset that I will not continue to carry her around like a tiny royal — imagine a bag of bowling balls demanding that you carry them around the house with you constantly — and devolves into a tantrum. My husband leaves her briefly to allow her the space to self-reflect and/or get a hold on herself, and that's when she winds up into a gagging spit-up. After that, she has a story and goes off to sleep.

The second night of Baby Magic, I turn on the taps, squirt some bubble bath in, and then reach up to unhook two towels from our door while Japhy leans over to swat the water pooling in the bottom of the tub.

In the next instant, he tumbles over into the bath and does a little slide on his right arm down the mat like an outfielder.* I snatch him up, horrified; his right side has a streak of wet from shoulder to ankle and he is crying. I pull the wet clothes off and he settles after a cuddle, ready to happily stand again at the bath in his diaper. When I take off his diaper, there is a poop in there waiting to ambush me. Wet wipe-less, I dab at his butt crack with some toilet paper, which gets caught there as he tenses up his buttocks in excitement at the bubbles in the tub. While I'm propping up this tiny human, he pees on my foot.

Then I get Scout into the tub, because I am a hero. My husband isn't around to help this night, but bed time goes OK in the end.

*To any of my friends who find the lock on my toilet seat perverted, this is why I have that.

The third night, the plumber had to come to fix the dishwasher and ended up replacing the faucets on the bath, so for the first time in a month, we don't have to keep moving the one handle from tap to tap to adjust the hot and cold. "Oh man, how long was this broken?" our landlord asks apologetically. "A month?" My husband and I guess, looking at each other. "About a month," we say, nodding.

My daughter wants pink hair, so I put a little Manic Panic in there while she and Japhy play with the bubbles — I mention this because I'm not sure if I contaminated the experiment? The bath smelled softly of a well-meaning chemical, the relaxing purple sleep chemical all these products have. The Manic Panic certainly didn't interfere with this. "I want Japhy to have pink hair," my daughter says, and I look at my happy, splashing, standing baby boy with his baby-soft sprockets of ginger hair and pristine skull. "Maybe tomorrow night," I say.

Bedtime goes great other than Scout marching around her room for 45 minutes after we say goodnight.

When you first start a nighttime routine, people tell you that it will act as a "cue" for sleep. Fast forward 10 months, and I do a baptism-length bath for Japhy; no washing, just dipping him like the bath is a checkpoint on The Amazing Race. Dinner went too long, and he's crying out for sleep. Do the complex sense memories evoked by 10 seconds of bathing assist in his eventual sleep? Hard to say, he nurses in the dark then nods off in my arms, like he did when he was little.

Scout has a great bath, 10/10, and agrees to get out when she finds "raisins" on her hands. We read three books for bedtime, and then another six, and then she goes off with three toys under her comforter.

This was one of those nights where everyone knows their lines, and it feels like you're performing bed time for someone else. God, I wish we had filmed this, our performance as Calm Family was peak.

So do I feel that the unique combination of lavender and chamomile essences in the one bath time product proved magic? Did sleep find its way to our windowsills sooner than usual? Here's the thing.

There is no control subject with children. One night, they'll simply roll over and drop into a comfortable snooze, and the next, they'll be marching around their room singing the Sesame Street song.

"But she's exhausted," you'll say to your partner as you watch your child playing banjo in the dark on the monitor. When you intervene after an hour's busy play, you'll find your daughter has managed to get the head-hole of a second pajama top wedged around her middle, and her pajama pants are pulled off all but her feet, where they trail behind like a shadow.

Calm bathing products and "sleepytime" lotions are a lie because being tired and being able to go to sleep are different things. Baths might be effective because they're soothing, but it's also sort of insane to imagine that a toddler is luxuriating in a bath, letting the day's worries wash away. What worries do my children have? Mostly that they're in a bath they don't want to take. "It makes me feel as if I were stewing up the world’s saddest soup out of myself," wrote Jessi Klein of the cult of baths.

Still, if we must, I recommend a pleasantly scented bubble bath to make it just a little more enjoyable. Magic.

More Like This
These 4 Sleeping Positions Will Keep You Comfortable After A C-Section
Should You Be Giving Your Toddler Melatonin To Help Them Sleep?
Here's When Your Baby Might Start Sleeping Through The Night For Real
Ashley Graham On The “Fun, Organized Chaos” Of Raising Twins