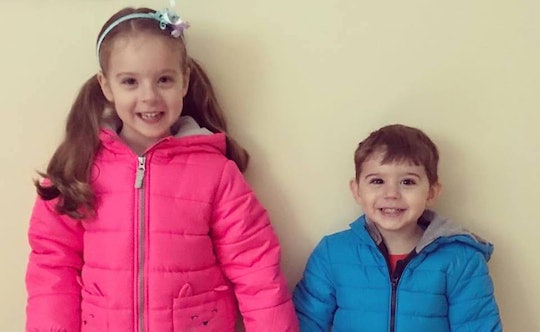 I Tried Being Tougher On My Kids, & It Was Way Harder On Me Than On Them

I cave easily to my kids’ demands, whether it’s for an extra cookie, a fourth bedtime story or crawling into bed with me in the middle of the night. I’d love to say it’s because I want to do anything in my power to make them happy, but really it’s because I can’t stand the whining and fits that happen when I put my foot down. I'm a pushover. But now that my kids are old enough to understand the(ir) power of manipulation, this has to stop. My new resolve is to be a tougher mom, even if it makes me seem a bit mean.

I’d be remiss in my parenting duties if I allowed them to grow up believing they can always get their way— especially if that way involves screaming and crying.

Besides, as my mother-in-law is fond of saying, “If you don’t rein it in now, you’re screwed when the teenage years hit.”

To avoid shocking my children with a sudden shift in our household rules, I sat them down and explained that things will be different from here on out: That temper fits will result in time outs, that I will administer only one warning (versus two or three) prior to doling out punishments for naughty behavior, and that what I say goes. Period.

I don’t think they took me seriously. At first.

Within 24 hours of our talk, my 2-and-a-half year old got a taste of Mean Mommy. After hitting his sister, he received a time out instead of me merely separating them, and he was incredulous. He looked at me with his huge brown eyes, which quickly filled with tears, and said, “But Mommy! No! I don’t want time out!” As tempted as I was to backpedal, I stood firm. He served his 2-minute sentence and apologized. And I silently patted myself on the back.

This may sound silly, but that small experience emboldened me. It was a reminder, albeit a brief one, that *I* am in charge, and that tears and whining (while still ultra annoying) are a worthy exchange for reclaiming my power.

I could totally do this.

Shortly thereafter, on a lazy Sunday afternoon, the kids waged an all-out war on each other, fighting over every damn toy they have. Their 2017 mommy would have yelled in exasperation and merely threatened to take the toys away. But Mean Mommy is all about follow-through. I gathered up the toys and locked them in a closet. They were stunned.

“You can earn your toys back with nice behavior,” I told them. AND IT WORKED.

I’ve begun staking my Alpha claim in smaller ways, too (since not every situation calls for a big gesture): When I say it’s time to get out of the bath and they refuse, I simply pick them up and dry them off, even if they kick and scream. No more “OK fine, you can stay in until the water drains.”

Don’t like what I made for dinner? Eat it or go hungry; I won’t make a separate meal any longer.

And yes, I really mean it now when I say “if you don’t eat your vegetables, you don’t get dessert.”

Of course, I’m not killing it 100 percent of the time. There are still instances when I struggle to enforce Mean Mommy (namely in the middle of the night, when my son — who never sleeps — wants to crawl in my bed). But that’s OK; I’m not perfect and this is as much of an adjustment for me as it is for my little ones.

I’m one month in to this experiment and so far, I’m pleased with the outcomes. For starters, I’m yelling less. Instead of getting frustrated and raising my voice, I simply take appropriate action. And my kids are starting to listen the first time I say something, instead of the fourth or fifth time (though admittedly, there are “off” days, when I swear they have a listening impairment). This is a work in progress, but there’s no denying the progress.

Case in point: The other day I overheard my daughter whisper to my son, “Don’t do that! Remember, Mean Mommy!”