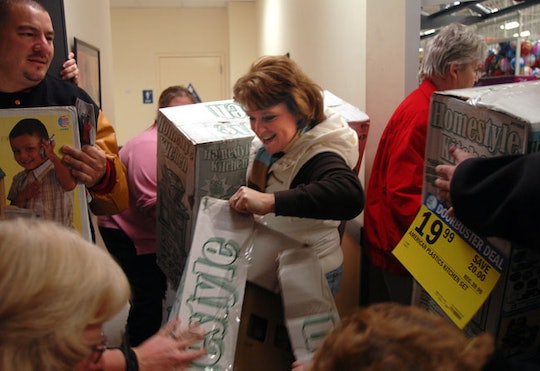 In my family, shopping is more than an enjoyable pastime or a necessary means of acquiring food or articles of clothing with which to adorn one's body. Shopping, for us, is serious business. My mother will tell you, without a trace of sarcasm in her voice, that shopping is her mainstay, her most favorite hobby, her lifeline (along with Diet Coke) in this world. Just the hint of a trip to one of the stores where new things run shiny and expensive, and her eyes light up like the Rockefeller Center Christmas tree. So needless to say, Black Friday is taken quite seriously in my home. Black Friday is everything.

Unfortunately for me, however, I seem to have missed whatever gene is responsible for the idea that Shopping = Life, and instead, I'm quite content to thank the Internet Gods for Amazon Prime. Instead of flocking to the stores at midnight on Black Friday, I happily add everything on my Christmas shopping list to my shopping cart.

But after seeing the glee in my family's eyes, hearing their laughter over shared stories of goods acquired in the Black Friday festivities, and wondering if perhaps I need to branch out and live life a little bit more, I finally decided to give the ol' holiday a try.

For the first time in my life, I set out to do Black Friday shopping with my mom. It was an experience I am still trying to recover from.

When my mom declared that we'd begin our shopping extravaganza at our local big box store, I figured the woman was a pro and knew what the heck she was doing. If starting out Black Friday meant starting out camped out in a parking lot, then so be it. They'd be giving away five free TVs, she assured me, her eyes misting over with a bright sheen. It would all be worth it. I already felt tired.

So sometime after we had eaten the last remnants of the pumpkin pie and I had nibbled my weight in turkey from the bones, I settled into our place in line, cursing myself for not wearing five pairs of socks or investing in a set of hand warmers. How could a place on Earth be so freaking cold? Was it always this cold and I just didn't realize? How do people in Alaska survive?

To distract myself, I starting counting the people in line, stopping to wistfully swoon over anyone I counted that also was holding: 1) a hot chocolate; 2) a hot coffee; 3) any substance that was steaming and therefore hot.

I was well into the hundreds when a roar went over the throngs of people amassed in that parking lot. We were nearing the opening of the store at 5 a.m., but apparently, an atrocious crime had just been committed! Something was happening, and it was big! I felt the crush of humanity around me as we all joined together in outrage at The Great Unknown Offense.

Whispers were carried around down the line, and I learned, from a woman wearing a fur coat and fuzzy boots (clearly, this was not her first Black Friday), that near the entrance of the store at the front of the line a second line of "cutters" had been forming.

Shock and outrage registered amongst us back-line dwellers, and in the frozen tundra of my soul, I felt a slight thawing with the twinge of curiosity this news imparted in me: What would happen? Would the battle of Good People Who Lined Up On Time prevail against the Evil Lazy Bones Who Tried To Form Their Own Obviously Wrong Line? Would it be an epic struggle the very bitter end?

I was only mildly amused by how serious this situation seemed to be for all those gathered together that fateful Friday, but I sobered up soon enough when a fleet of police cars zoomed into the parking lot, lights flashing and sirens firing, to deal with the actual riot — complete with people being punched in the face — erupting right there in the front of the line. I was genuinely shocked and started to wonder what on earth I had gotten myself into. "Really, I've never seen anything like this before!" my mother said, rallying the fellow veterans around her. "No, no, never!" they all murmured, puffy coats rustling as they all shook their collective heads.

Their reassurances, however, did nothing for me once the police had properly disposed of the Line Cutters. When the doors opened at precisely 5 a.m., it was a mob scene. I'm sure that this scene happens at most stores on Black Friday, but it didn't make me feel better to think that people nationwide are that on edge about getting 40 percent off on a smart watch.

Inside the store was like nothing I have ever experienced in my life. Approximately two seconds after I got inside, a massive wave of people (really, I don't think my feet were actually moving, but instead, I was simply swept up by everyone else), carried me one way and my mom another.

I watched, helplessly, as the mob carried her over towards the electronic goods section and I drifted over towards the kids' toys. While I strained my ear to listen for the sound of my mom calling my name in the midst of shoppers arguing about who touched the TV first, my mom was, unbeknownst to me, actually in the process of being run over by a gleeful shopper using her cart as a loaded weapon. ("I don't know what happened, Chaunie," she would later tell me, her voice trembling. "It was like she was possessed.")

I let the crowd carry me through to the girls' toy aisle, where I admired the shelves full of presents I would've loved to have as a child (a pink ironing board! A new tea set! A doll that sh*ts itself!). I wandered hopelessly around the store, hating myself for missing out on sleep for an experience I'd only come to relive in horror for the rest of my life.

And then, when I thought that my self-loathing couldn't get any worse, a shrill scream rang out in the middle of the Barbie aisle: "My baby! Where is my baby?!" a woman cried, clutching a blanket to her chest that definitely did not have a small person attached to the other end of it. Actual real terror seized my stomach as I watched the poor woman display the kind of hysterical panic of a parent who has lost a child that I didn't fully understand at the time because I wasn't a parent yet, but now look back on with even more empathy. That poor kid could be anywhere, I thought. She could be outside! She could have been kidnapped!

My fellow shoppers seemed to remember that they had souls after all, and everyone dropped everything they were doing in a desperate search for the little girl. The entire store went on lock-down, with nobody going in or out, the police were called back yet again, and anyone with bulky coats, large bags, or bad hair was viewed with the upmost suspicion.

I felt on the verge of tears myself, and I just wanted to get the heck out of there. On top of it all, I wanted my own mommy.

Eventually, the poor girl was found (over in the toothpaste aisle, I believe, safe and sound), and the police trickled out of the building. People started fighting again, and I eventually somehow found my way to my mom by clawing my way — literally — through a whole display of those holiday tins full of cookies that people reuse for puzzle-piece containers and then ducking through clothes.

I was exhausted and miserable and weepy and hungry, and when we made our way out in the sunshine, a part of me wanted to drop down on my knees and kiss that sweet, sweet pavement in front of me.

But the morale of the story is, I had "done" Black Friday and I would be forever "done" with Black Friday. It didn't matter what store it was or what deals were promised. I would never, ever darken the doors of a store that early in the morning on the dawn after Turkey Day. The truth is, I had never been so happy to leave a store in my life ... completely empty-handed.