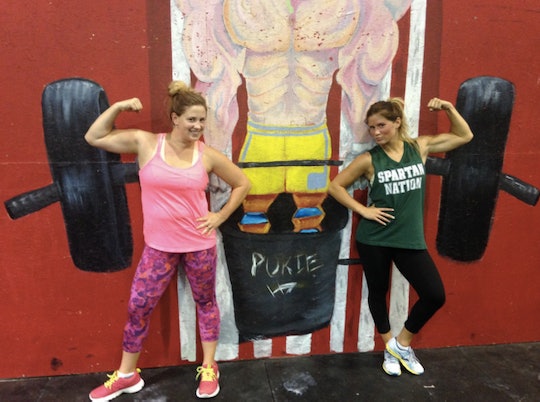 I Tried CrossFit For The First Time, & Here's How It Went

I’ve heard a lot about CrossFit. From all of those enviable pictures of pregnant moms lifting weights bigger than my house to a cousin who looks ready for a bikini competition to a friend gushing it would “transform” my life, it seems like everywhere I turn, all signs point to CrossFit. The no-frills CrossFit website promises that it’s the perfect workout for everyone from Olympic athletes to elderly grandparents. (No, really, it does.) And it’s gaining popularity among my mom crew, too.

“CrossFit has been the single best thing I've done for myself, mentally,” Michelle H., a mom and CrossFit devotee, told me. “It's hard to motivate myself to go, it's hard to get through some of those extreme workouts, but the benefits to how I feel outweigh everything else. I feel better physically — I'm stronger and more fit than I've ever been. I saw results from CrossFit almost immediately, and I feel more comfortable in my skin than I've ever felt [before]. Because it requires a lot of discipline and physical exertion, I have to take care of my body. And the CrossFit community — as much as it's ridiculed and labeled as a 'cult' — is extremely supportive.”

Her glowing recommendation — one I’ve heard echoed by so many other women — had me sold. I was going to try CrossFit.

I’ve been on a quest to find my exercise “home” since having my fourth baby. I started with at-home workouts, thanks to my woman Jillian Michaels and her free YouTube Shred videos and moving on to my man Shaun T. and his T25 Focus exercises, both of which kicked butt -- mine, specifically. When I finished those programs, however, I found myself wanting more. I started running again and joined a gym, which got me hooked on the feeling of pushing myself physically. The endorphin rush felt awesome.

So I decided it was time to throw a little CrossFit into the mix. I knew it had the reputation of being intense, even to the point of your muscles-bursting-and-literally-killing-you intense, but I felt like my time in the gym and running long distances three times a week would be more than enough preparation.

Oh, I was so very wrong. But as it would turn out, CrossFit would be so very right.

In preparation for my first class, I donned my best exercise leggings to try to amp up my confidence level from “scared stay-at-home mom of four who still looks pregnant” to “extreme CrossFitter who can squat three times her body weight”.

I dragged my super-fit sister, whom it should be noted works out approximately two hours day, is genetically gifted to look like a Victoria’s Secret model, gets stuffed from half of a piece of pizza (which is like an appetizer in my book), and has not given birth. (That I know of.) Even though she is super fit, I love working out with her because in true supporting-each-other-as-women fashion, I don’t have to compare my body to hers. I simply learn from her and get inspired by her fitness level.

I will more than likely never have her 20-year-old abs, but watching her push herself has helped me find strength I didn’t know I had. We both genuinely love working out and it’s such a great way to spend time with each other besides our other favorite hobby, which would be eating all of the baked goods everywhere. Plus, everyone needs a gym back-up sometimes, it’s just a fact.

Our first class was a beginner’s class. CrossFit goes in different levels, and if you’re a newbie like me, you start with a one-on-one session or a group session with a coach, who guides you through all the exercises and watches your form. (Super helpful.) There’s an actual board with the workouts and a timer as you move through each exercise, so it’s literally impossible to mess up. I was actually really surprised by how unimpressive the gym was. There’s not a whole lot to it, but apparently, that’s part of the philosophy: simple workouts are all you need to live a truly healthy life.

Our coach that night was incredibly helpful, and she was a woman. She demonstrated all of the moves for us newbies and watched our form, correcting us when necessary. She cheered us on the whole time and never even sighed once in annoyance when I peppered her with question after question. Even now, after the beginner’s class is over, another of the coaches has texted me a workout schedule and encouraged me to pop in again. Every single person I met there that night seemed genuinely interested in helping us exercise and getting us to feel comfortable, which was an odd feeling because sometimes I don’t feel like people are really that nice. At CrossFit, it’s apparently part of the package.

Things started out innocently enough with some simple wall walks.

Then we moved on to my all-time favorite: hitting the squat bar. For some reason, squatting just makes me feel badass, you know? Like, only serious athletes squat.

After squatting, I was feeling pretty darn proud of myself and may or may not have mentally (OK, fine, physically) patted myself on the back for doing so well. And that’s when the coach looked at her timer and said the following fateful words: “OK, let’s get ready for our workout now!”

Excuse me? Say what? I thought we were doing the workout?

Turns out, our warm-up, wall walks, and squats were just the beginning, and apparently, I was way, way ahead of myself. First, we did some “wall squats”, which equated to throwing a 15-pound ball up a wall, squatting while you catch it, then throwing it back up over and over and over again. It took doing approximately one of these before I regretted life as I knew it. Only 14 more reps to go!

Oddly enough, in the midst of my workout, I experienced that exercise “high” everyone talks about. I was fighting back vomit but absolutely loving it at the same time. I wanted more and I loved pushing myself to go further, even when I wanted to stop. And although I mostly enjoy exercising for myself and really love solitary workouts as a general rule, I found that the small-knit group really encouraged me. It helped to have someone ahead of me in the run to challenge me to keep going. And I loved that even though I stepped into the gym feeling totally self-conscious about my rolls and extra pounds, by mid-workout, I could not have cared less what I looked like. I could’ve been running topless for all I cared, because I was so focused on just getting through. It was an awesome feeling to just be so “in” my body as opposed to constantly wondering what everyone else is thinking “of” my body.

After the fun of feeling my stomach bile churn up my throat, our CrossFit coach upped the ante and had us run out of the gym and down the road carrying our 15-pound ball. Thankfully, four pregnancies prepared me for this endurance test: when I got tired, I placed the ball in front of me and waddled my way back. Yep, #nailedit.

The circuit finished with 15 kettlebell swings and then the torture started all over again, for a shocking 15 minutes, which doesn’t sound like a lot when you’re reading this article but when you’re the one struggling to limp with a 15-pound ball on your person, trust me, it’s a long time.

My sister and I kicked some serious butt, if I may brag for a minute. She lapped the two men in the class about 10 times and even I was able to beat them out at the end because obviously women are built for endurance, thank you very much. Obviously, lapping the entire gym wasn’t the point, but I loved that the CrossFit workout gave us the opportunity to both thrive in a way that worked for us. My sister thrives on the thrill of the competition, while I just wanted to make it through the workout. There was something for both of us there, even though we are two completely different fitness levels.

I know CrossFit has a bad rep for being a cult or being too intense or just for show, but honestly, that wasn’t my experience at all. CrossFit, to me, felt like everything exercise should be: a simple, no-frills workout that works your entire body so you can live a healthier life.

One of the things that’s been so frustrating for me when trying to find an exercise routine that works for my busy lifestyle has been the singular aspects of them all: running, for instance, gives me endurance, but doesn’t necessarily give me the strength or weight loss I’m looking for; weightlifting, while fun, can be difficult to do in a whole-body way unless you have the money to hire a personal trainer to tell you exactly what to do.. As a mom, my goals for exercising aren’t about building a Kim Kardashian booty or having flat abs; I just want to feel good in my body all day long. I want to feel athletic and be able to move and jump and run and lift heavy sh*t, like a toddler throwing a temper tantrum or boxes when we decide to move. I want a workout that’s going to work my whole body and give me proportional strength, not just muscles that look good. I want functional, not just fitness.

For me, CrossFit was exactly that. It had the personal trainer-style coaching I needed as a beginner, but also the ability to individualize each workout, and honestly, I loved every minute of the pain. When the timer finally went off, I was honestly a bit disappointed, but I knew I was hooked for good. CrossFit was exactly what I had been looking for: a workout that was so fun you didn’t feel like it was torture, a community of encouragement, people who actually know what they’re talking about, and a mixture of cardio and strength to help moms like me who may struggle in the weight-loss department but really, ultimately, just want to feel like we’re back in control of a body that hasn’t feel like ours in a really long time.

More Like This
Ginger Zee Had A Perfect Response After A Troll Asked Her "Who's Raising Your Kids?"
It's A Beautiful Day In Jenny Slate’s Neighborhood
35 Relatable Quotes That Prove Being A Mom Isn’t Easy
I Tried This Doctor-Backed Headache Aid That Makes Hydration Easy