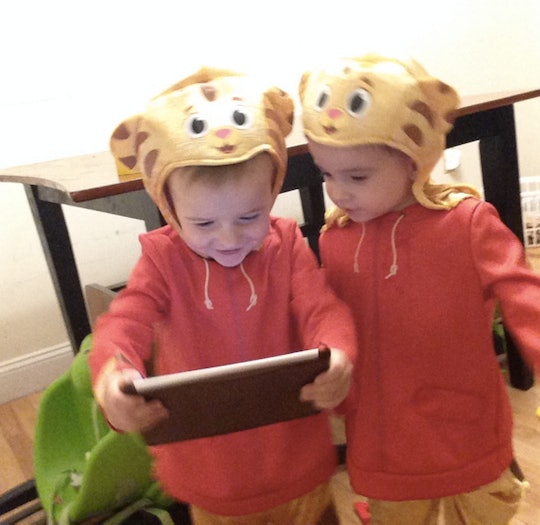 You may vaguely remember Mister Rogers’ Neighborhood as that television show you watched as a kid with puppets and a very elaborate song-and-dance routine involving a sweater and pair of sneakers. But if you’re a parent (or an adult with a thing for PBS kids) you can relive the magic all over again through the cartoon Daniel Tiger’s Neighborhood.

Gone are the puppets and slow monologues; all of the characters we knew and loved have been turned into cartoons, shacked up, and procreated. The current cartoon centers around the old character's pre-school-aged offspring, namely Daniel Tiger, Miss Elena, Katerina Pussycat, O the Owl, and Prince Wednesday. For me, watching kiddie cartoons is a tiny slice of torture, but the nostalgia of watching characters I remember from my own childhood makes Daniel Tiger’s Neighborhood more tolerable than the high-pitched voice Mickey Mouse or that bald whiny bastard known as Caillou.

While Daniel Tiger doesn't do much education-wise for my kids — he doesn’t teach reading or math or wear pants (but his female counterparts do?)— each episode comes with a song designed to help children learn how to cope with a specific behavioral or social issue.

After streaming each episode at least three times, those little life-lesson songs started to earworm themselves into my brain, and I began to wonder if my kids would respond to them outside of watching the cartoon. I picked four episodes with songs about trying vegetables, sharing, teaching kids how to calm down when they’re mad, and how to be OK with a babysitter to use on my toddlers IRL.

God help me, but here’s what happens when you try to parent like a cartoon character from Daniel Tiger’s Neighborhood.

“You Gotta Try New Foods ‘Cause They Might Taste Good.”

In this episode, Daniel, Prince Wednesday, Miss Elena, and Katerina are all helping pick veggies from the school garden. Teacher Harriet encourages them to try different veggies by singing,

You gotta try new foods ‘cause they might taste good!

She praises them for trying, even if they don’t like it. Katerina (who, let’s be honest, is a bit of a diva) refuses to try anything until she get intrigued by a “pretty” bell pepper, which she then tries and loves. If you put aside the fact tigers in the wild don’t actually eat carrots and that Teacher Harriet is far too comfortable wielding a knife around a bunch of 4 year olds, it’s a cute little song to get kids to try new foods.

I eat salads most days for lunch, partially because they’re good for me and quick to throw together, but mostly because the boys aren’t interested in stealing it from me. But after watching this episode, I was surprised when my kids eyed my salad and asked to try a crunchy carrot and a squishy tomato, just like the characters.

Now I use this song anytime I’m trying to get them to try something new. Nine times out of 10, they spit the veggie right back out, but the song is sometimes successful at getting them to try other new foods. Meatloaf got taken off the banned foods list this way, as did zucchini fries and bagels.

While I don’t spank my kids, I admit to yelling more than I wish I did. Either they’ve inherited my temper or toddlers simply get angry a lot, because they do their own fair share of shouting and stomping about.

Maybe it’s just because she’s got some premium catnip we don’t know about, but Mom Tiger never gets her fur in a knot when Daniel and his friends are acting up. In an episode where Daniel and Prince Wednesday are mad that a rain storm has ruined their plans to go to the beach, Mom Tiger teaches them to avoid a tantrum by telling them,

It works so well on the kids that Mom Tiger uses the technique herself when Daniel and Prince Wednesday drag buckets of sand into the house. Where I would have lost it, she counts to four, hands them a dustpan, and strolls away.

So this week when my kids decided to use the basement door as a blank canvas for their markers, instead of yelling, I took Mom Tiger’s advice. I did it again when Jeremy threw his pancakes on the floor, when Logan spilled my water bottle, and when they teamed up with the cat to unfurl an entire roll of toilet paper. Perhaps I’d do better counting all the way to 10, but counting to four did absolutely nothing to calm me down. The only way I was able to get over them acting up was to resort to my usual technique of yelling, cleaning it up, and consoling myself with candy.

The song was marginally more successful on calming the kids down. When Logan had a meltdown after losing the grocery list, he stopped screaming long enough to listen to me sing to him. And Jeremy got so distracted by hearing me count to four that he completely forgot why he was crying (his granola bar broke) and decided to count to 20 instead.

“You Can Take A Turn And Then I’ll Get It Back.”

Just because my kids are twins doesn’t mean they always get along. I spend so much time playing referee between the two of them that I’m thinking of getting a whistle, or perhaps, at the very least, a fashionable yet comfy black-and-white striped tunic. I get that it's perfectly normal developmental behavior for them fight over the same toy, but knowing that what they’re doing is typical is small comfort when you’re watching your kids play tug-of-war over a plastic spatula day after day.

Because they’re the perfect role models, Daniel and his buddies handle disputes over property by singing,

You can take a turn, and then I get it back.

I’ll be honest, I never in a million years would’ve thought this would be effective in real life, but when threats and screams and ignoring them all failed to stop one twin from trying to box the other out of playing with the toy kitchen, I sang them this song and was astounded when it worked.

Not only did they start singing the song and sharing — they now actively look for ways to share with each other and then look to me to sing the song as praise. This newfound lack of fighting alone is worth the price I pay for Amazon Prime to stream the cartoon.

Rating: Five tiger stripes, and a “hell yeah!” from me.

Leaving your children in the care of a capable adult so you can get some time to yourself is something I firmly believe all parents should do, but I struggle with it anyway. Combine my social anxiety with the the fact that I’m a stay-at-home parent, and you get two toddlers who aren’t used to being away from their mom very often.

I thought the hardest part of working through leaving my kids with someone else would be my own anxious feelings, but I failed to think about the disservice I was doing to the boys by not allowing them to be supervised by anyone other than myself. I’ve recently pushed myself to go outside my comfort zone by taking runs without the jogging stroller and leaving the boys in the gym daycare for an hour once a week while I do a dance class.

Overall, it’s worked, but I hate coming back and seeing that the boys were upset while I was away. Logan in particular struggles with separation anxiety and sometimes cries when I leave him. Although I know they’re physically fine and they need to learn to socialize with other kids and listen to other adults, I still want them to feel safe and know that I’m not abandoning them.

Enter Daniel Tiger. In an episode where Daniel doesn’t want his parents to leave him at school or with a babysitter (Prince Wednesday’s older brother Prince Tuesday holds down multiple jobs, including babysitter, which makes me think the royal family’s finances may be in trouble)  the Tiger parents comfort him by crooning,

So this week when I dropped the boys off, I sang the song to Logan. He gave me a “Bye Felicia” wave and ran over to the dollhouse. I felt stupid, until I came back at the end of class. The sitter told me he didn't cry once while I was gone. Instead, he came up to her several times and reminded her that I was coming back. While I still don’t love the idea of him dwelling on the fact that I left him, it’s a marked improvement over tears!

Although using the songs from Daniel Tiger’s Neighborhood didn’t yield the instantaneous results that the cartoon parents on the show get to enjoy when singing them, choosing familiar tunes to try and change my kids’ behavior wasn’t a complete disaster. They’re definitely more open to trying new foods when I remind them that Daniel does it, and they like to brag about how well they share with each other while singing the sharing song.

I don’t typically worry about my kids watching too much television, but finding a way to tie the cartoon into their daily routines felt like I was letting them watch something educational, which made me feel less guilty about their screen time. I’ll definitely continue to let them watch it, not just because I really want to know why the Tiger family has beachfront property while the royal castle overlooks a busy road, but because I want to be on the lookout for any other helpful songs that could improve my kids behavior.