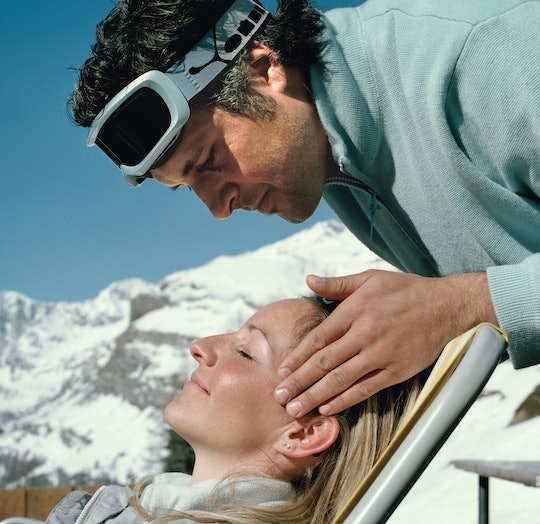 I Treated My Mom-Stress By Watching YouTube Videos & Tapping Along

During pregnancy, I was probably the calmest I'd ever been in my entire life. I was meditating daily and regularly practicing hypnobirthing. This lead to a massive decrease in my obsessive tendencies, which I had previously treated with cognitive behavioral therapy. From what I can remember, my intrusive thoughts almost disappeared. Then came the newborn days.

More Like This
Your Guide To Swimming Postpartum
Therapist Says: Alone Time For Moms Is A Necessity, Not An Indulgence
Give Your Mom A Shout-Out With These Mother's Day Hashtags
These Alternative Names For Stepmom Are Sweet & Meaningful

Somewhere in the blur of no sleep and no self-care, I felt the anxiety creeping back in. That's how it starts: a check here, an intrusive thought there. Later down the line, you realize that the OCD beast has clawed its way back into your life and taken root again. It felt like all my hard work had gone down the drain. I felt frustrated, but not defeated.

I try to meditate as often as possible, occasionally take an oral flower remedy, and I recently tried the emotional freedom technique (EFT), aka tapping, to deal with the stress. By tapping along the Chinese meridians on the face and hands, you can train your body to interrupt stress responses, Martine Moorby, a trainer in the method, tells me. You can find EFT instructional videos on YouTube, and work with a therapist at home via videoconference, much as you might summit a mountain with your Peloton instructor.

Moorby, an EFT master trainer of trainers, says the technique can help people "let go of emotional baggage" by decoupling "habitual triggers from their responses." She also says the technique can restore the energy balance in the body, which sounds great! For skeptics, I note that the National Health Service here in the UK actually lists the therapy in a white paper as a "psychological" version of acupuncture.

I stumbled across EFT Tapping accidentally. I'm a huge fan of author, speaker, and coach Gala Darling, who taught me how to tap via her weekly YouTube video series High Vibe Honey, which used to include a weekly tarot card pull, plus a tapping session on the issues that the cards may have revealed. I began tapping along with Gala and immediately felt all my troubles melt away and as if I could literally do anything.

Gala often spoke about Brad Yates, who has his own YouTube channel filled with tap-along tutorials, so of course I had to check out his work — a vast treasure trove of tapping sessions focused on a range of issues, from overcoming fears to attracting more money. There's even a video entitled "Got the Game of Thrones Ending Blues? (Or Avengers?)." I quickly took a liking to Brad, his positive outlook, and often comedic take on the alternative therapy.

I have literally cried during some of these sessions, and if that's not proof of me freeing my emotions, I don't know what is.

I searched for my particular struggles, namely OCD and intrusive thoughts, and I was elated to find videos on both. I began following along with Brad, copying his movements — a tap to the forehead, a tap to the cheeks, and so on — and repeating his words like, "Even though I have these obsessive thoughts, I choose to love and accept myself anyway." I have literally cried during some of these sessions, and if that's not proof of me freeing my emotions, I don't know what is. The utter relief and peace I feel during and after these sessions, which silence my chattering brain, is absolutely crazy (in the best way) to me.

After tapping with Brad just once, I fell in love with the therapy. I proceeded to watch and tap along to his videos at least once a week and I feel like the benefits, at least for me, are life changing. Rather than spending precious moments checking taps, plugs, and the like, or worrying if I've left the oven on, I am fully present in the moment with my son. Instead of trying to control my mind running riot with intrusive thoughts, I can focus entirely on my toddler, rather than being stuck in my own head.

I have now been tapping for a few months, and it may sound super weird, but when I am tapping with Brad, I get into a sort of hypnotic, zen-like state where I am fully at peace. Afterwards I feel refreshed and rejuvenated and for a while, I am able to stop my checking behaviors and intrusive thoughts in their tracks. This is basically magic, given the power they once had over me.

I explained my personal issues to Rangana Rupavi Choudhuri, Ph.D., who is accredited through EFT International and has a doctorate of philosophy. Overcoming OCD can be tricky, she says. "Some clients have an entrenched secondary gain not to let go of the pattern." That said, her sister tried using EFT for around 10 months, until "one day she realized she was no longer cleaning the kitchen floor with a toothbrush." Tapping can potentially replace the OCD habit, Choudhuri says. Discovering this made me feel hopeful for the future.

Solid "clinical research" on the effects of EFT is being compiled currently by EFT groups, accredited EFT international trainer of trainers Ranjana Appoo tells me by email. Of course, until alternative therapies are accredited by agencies outside of themselves, such as the World Health Organization, it's best to take everything with a grain of salt. But, whether it be a placebo or not, it's certainly working for me! I've got my fingers crossed that the benefits of EFT are scientifically proven and accredited by organizations across the globe soon.

So when I discovered tapping, it felt like I'd done a few consecutive days of meditation in one sitting. It was that easy, and even fun! I got back on my imaginary unicorn, picked up my lance, and returned to slaying my demons. And honestly, I don't intend to stop anytime soon.

When life gets hectic and I go a couple of weeks without tapping, I can feel my compulsive behaviors and intrusive thoughts creeping back in. As with the cognitive behavioral sessions I completed a few years back, I know that my journey with OCD is far from over, especially having had it for as long as I have. I believe it'll take a while of practicing EFT for me to yank it out by the roots, so to speak.

Instead of resigning myself to a life with managing OCD and the stresses that come with it — after my CBT sessions I felt I learned the tools to manage it, but that OCD was something I'd have to live with forever — I now feel incredibly hopeful that an OCD-less future is possible. In the meantime, I'm thoroughly enjoying where tapping is taking me. Tap tap taparoo.