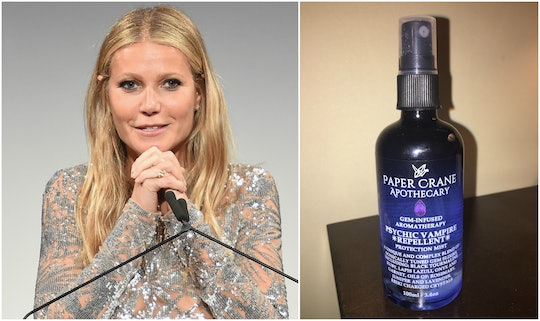 Through her "lifestyle" site and marketplace, Goop, Gwyneth Paltrow has worked tirelessly to discover and make available to the common man luxury items like chrome toothpaste squeezers, $950 toilet paper, Christian Louboutin shoes, and vaginal steaming kits. She wants us to live our best lives, and we can only be grateful for her services to e-commerce. But now, just in time for Halloween, she has outdone herself to bring us "Psychic Vampire Repellent." If the mere mention of vampires brought you back to a fever dream of misty pre-kid make-outs with Edward Cullen in the woods, same, ladies; same. But that isn't what this is. The repellent is meant to "banish bad vibes" and shield you from "the people causing them" — emotional vampires, so to speak.

Basically, without a good defense, your aura is a sitting duck for bad juju. This spray is intended to protect you from "psychic attack and emotional harm." I'm 90% sure Gwyneth is talking about Martha Stewart here, by the way. On the one hand, this is some pretty woo-woo stuff that I'm not going to fall for; on the other, I'm a new mom, and it does sometimes feel like my aura is under attack from sanctimommies and random strangers, among others. How amazing would it be if a spray could really protect us from other people's negative energy? Just ✨imagine✨ the implications for Facebook.

The idea of paying $28 for a gem-infused protection mist might sound a little fringe — if you put a rock in a glass of water, I am the first to admit that you don't typically see a lot of *infusing* going on — but essential oils have been thought for centuries to have healing properties that help us physically, mentally, and emotionally. Lavender is known for its stress-relief properties, sandalwood puts me into an undoubtedly lumbery mindset. Putting away my skepticism, could this "Psychic Vampire Repellent" help relieve the stress of having to deal with people that drain me emotionally? I decided to find out.

The spray comes in a blue glass bottle, just like the apothecaries of yore used. At the very bottom there are little stones floating around — the infusing is still going on! One look at the bottle and I started to think this spray might be the real deal. The label listed ingredients I had never heard of, things like sonically tuned water, gem elixirs, bloodstone, reiki, sound waves, moonlight, love, and reiki-charged crystals, to name a few. I started spraying immediately.

I'm happy to report that it does not smell like garlic, like you'd expect from your standard CVS vampire repellent, but rather like rosewater. The tangible effects of the repellent last only seconds. The instructions are to spray ~around you~, not directly on your body, so the scent quickly dissipates into the air. Have you ever walked around in a cloud of $28 air? It's nice.

The first few days I was only around my husband and daughter, and aside from that brief pleasant blast of rosewater, I didn't notice any difference in my life from my dutiful spritzings of vampire repellent. But then we left on a week-long trip with my mother-in-law. If I ever needed a spray to protect my aura, this was the time to whip it out.

My mother-in-law and I get along mostly, but she has a way of getting under my skin with her unsolicited advice. So for the entire trip, I sprayed Psychic Vampire Repellent everywhere. The weirdest thing was I wasn't annoyed or rattled by my mother-in-law. Did the spray protect me from Essence of Mother-In-Law? Maybe. I kept on spraying.

By day three, I was convinced that this spray was some how affecting our mood — we were getting along famously, like people under a spell or in a Carnival Cruise ad. Yes, we were drinking sangrias on vacation, but maybe there was something more gem-infused taking place. Was the problem that there was simply not enough sonically tuned water around us normally?

It turns out: no. Once our vacation came to an end and the last glass of wine was poured, she was at it again.

I used the spray after we returned from our trip, but it didn't seem to have the same psychic kick. I even tried spraying it on me directly, against the directions, wondering if it would burn my skin like an Infinity Crystal, hoping that the scent would last longer, give me some sort of aromatherapy effect. My belief in the spray faded to nothing, not unlike the $28 bottle of water I was misting into the air.

Is that a fair analysis of the product? My notes show that, even if it didn't last, my aura enjoyed a real vacation. Undeniably, my mother-in-law and I got along like never before. ✧･ﾟ: *✧･ﾟ:* Undeniably*:･ﾟ✧*:･ﾟ✧, there was bloodstone in the air, where normally there was just everyday pollution. Yes, Gwyneth is no scientist, but then again, scientists have shown very little interest in my aura. If Gwynnie thinks that this $28 potion can protect you from harsh vibes, I'd say treat yourself; your aura is totally worth it.