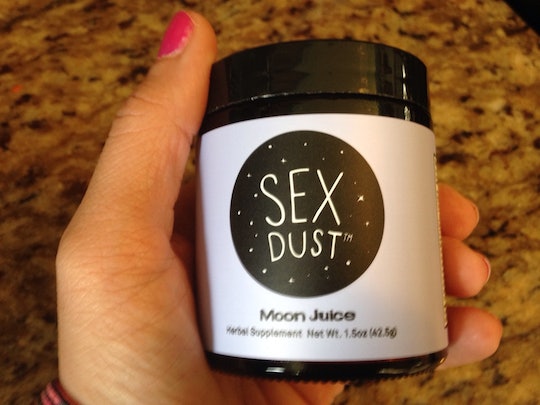 When it comes to getting in the mood for sex, I'm a simple gal. Hand me a bowl of cherries or show me the trailer for any of the Magic Mike movies, and I'm pretty much open for business. But celebrities have their own way of doing things. When she wants to amp up her sex life, Gwyneth Paltrow, lifestyle entrepreneur and queen of making women feel like they're only pretending at adulting, uses Sex Dust, an holistic herb blend from the wellness line Moon Juice.

According to the Moon Juice website, Sex Dust "is a lusty edible formula alchemized to ignite and excite your sexy energy in and out of the bedroom. A holistic approach to deeply nourished sexual vigor, this warming elixir sends waves of sensitivity and power to all the right places." Its ingredients are mostly things I've never heard of before: ho shou wu and shilajit to boost your sex drive, cistanche and maca to increase sexual energy, epimedium to improve blood flow to sexual organs, and schisandra for healthy sexual function. While this might all seem like hippie nonsense, Paltrow swears by it: According to her website Goop, she puts Sex Dust in her morning smoothies.

At the moment, I'm very content with my sex life. Since I work most nights and my partner and I have two super active 4-year-olds, I try to opt for quality over quantity. But I wouldn't be against having more sex, and I've always been curious about Eastern medicine. So when my editor asked if anyone was game for trying Sex Dust for a week, I raised my hand, in the hopes that it would make my sex life more Paltrow-esque. Then I stalked the UPS driver until he delivered the jar. Here's what happened when I tried using Sex Dust.

My jar of magic sex powder arrives in the afternoon. I'm so excited to try it that I ignore Gwyneth's suggestion to put it into a smoothie. The directions say to stir a teaspoon into "nut milk, coffee, tea, hot or cold water or blend into your favorite smoothie." Since I don't have any nut milk and I'm too impatient to boil water, I grab a cup of water and open the jar, eager to get my sexy on.

As soon as I unpeeled the seal from the jar, I knew I'd regret volunteering for this experiment. For starters, there was the smell. Since sex is supposed to be pleasant, I was thinking this would smell like chocolate, perhaps with some floral notes. But honestly, it smelled like dirt.

Things got worse when I dumped a teaspoon into cold water. Maybe I should have poured the water over the powder, but no matter how long I stirred, the Sex Dust wouldn't mix with the water. After five minutes of stirring I still had a film of tiny powder clumps in the surface of the water. My partner said it looked like sewage.

Figuring this was a good as it was going to get, I dared to take a sip. It was beyond gross, to the point where I literally started gagging. Without anything to mask the flavor, Sex Dust tastes like Hot Topic smells.

I threw the mess into the sink and took deep, cleansing breaths to avoid puking. When my partner touched my shoulder in bed that night, I shuddered — but not in the good way.

I was too scared to try Sex Dust again in the morning, but by the afternoon I knew I had to put on my big girl panties and drink it again. For journalism's sake. I thought masking the taste would be my only hope, so I defiled a cup of the fancy licorice tea my sister brought me back from Paris, thinking the earthy notes may mask the flavor.

That night I had some sexy dreams, but was it due to the Sex Dust or because I watched Jean Ralphio on Parks and Rec before bed?

While hot water definitely seemed to help the dust blend with the water, I'm sad to report that the flavor was still front and center. But I really wanted to see if it made me want to have sex, so I got 3/4 of the way through before I started gagging and had to stop. Oh, and no, I did not want to have sex that night.

Day 3: Sacrificing my smoothie to the cause

I finally decided to try the Sex Dust Gwyneth's way — in a smoothie. Along with mushroom protein powder (?) her recipe calls for lots of other strange ingredients besides the Sex Dust like ashwagandha, ho shou wu and cordyceps. I'm not even going to pretend I know what those are, let alone that they're pantry staples in my house. So instead, I added the powder to a mango lassi.

Usually my mango smoothie is a Instagram-worthy shade of light peach. This smoothie's shade was the same as my face when I have a hangover. It was a worrisome, dingy grey. I didn't want to drink this smoothie, I wanted to give it some Advil, wrap it in a blanket and tell it to go nap for a while. But I drank it anyway.

Was it good? No. Was it so bad that I could follow through on my plan to toss it out and go get hash browns for breakfast instead? Also no. The mango made the Sex Dust just barely tolerable, sort of like if I'd tossed a handful of mushrooms into the blender accidentally.

That night I had some sexy dreams, but was it due to the Sex Dust or because I watched Jean Ralphio on Parks and Rec before bed? Who's to say.

I woke up and had another smoothie. While the taste was still funky, it was nice that my kids weren't pestering me to drink half of it like usual. The day before, I gave them a single sip of mango Sex Dust smoothie and they spit it out and glared at me as if I'd betrayed them. Maybe this is why Gwyneth really goes all in on these powders: so her kids don't try to steal her food.

I found myself wanting to listen to some old school Boyz II Men.

As much as it pains me to admit it, I thought about sex today more often then a 13-year-old boy. It was all I could do not to jump on my partner when he got home. Once the kids were asleep, we finally did the deed. But since I was so revved up, it was a fast and furious sort of thing, not the long night of passion I thought the Sex Dust would bring, since it's ingredients claim to be both an aphrodisiac and sexual enhancer.

This morning I actually didn't shudder when I drank my morning sludge. I also found myself wanting to listen to some old school Boyz II Men. Maybe it was the Sex Dust taking effect, or perhaps it was just because I busted my dry spell last night.

I was in a really good mood all day, and I did think about sex more than usual, but I don't know if that was the Sex Dust or just because it was the end of the week. I did have sex with my partner again, and it was great, but I wasn't tapping into a well of sexual prowess I never knew existed anymore. TBH I don't even think I took the time to take my shirt off.

Does Sex Dust give you magic bedroom powers? Could Gwyneth be onto something with this Sex Dust? Maybe, but I'm still not sticking jade rocks up my lady box, as she also recommends on Goop, even if she does claim it will balance my chi. The taste of the powder was something I couldn't get past, and the sex I had this week wasn't mind-blowing enough to make the dirt smoothies worth it. When it comes to aphrodisiacs, pass the chocolate, please.