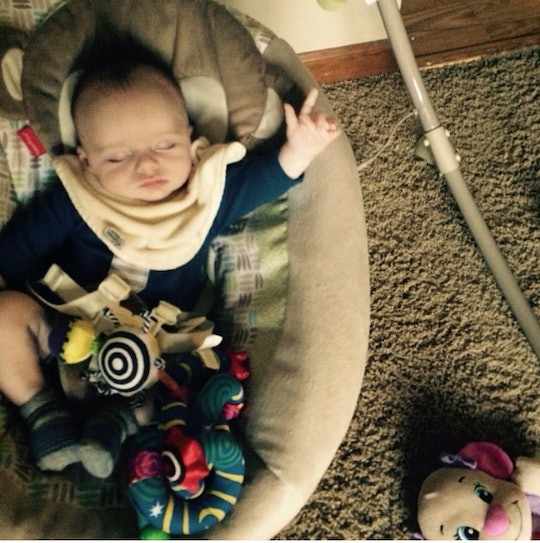 I Tried Harvey Karp's "5 S's" & Haven't Looked Back Since

When I was nearing my birthing time with my son, a friend of mine sent me a text message. “Check out Harvey Karp’s '5 S’s.'” Her take? "It worked like a charm." I’ll admit it: when I heard a male doctor thought he held the key to parental success, I was skeptical (though intrigued). A MAN?! NOT A MOTHER!? – A MAN!? (Totally unfair thought, because duh, men raise kids too, but still, my reaction.) But then I thought, OK. She’s had a kid. She knows way more than I do about having a kid. I should check it out.

I did some Googling and saw the general idea, which is to employ tactics designed to recreate the environment of the womb. Dr. Karp believes that the initial months after a baby is born are so fraught for them because they are not actually ready to be part of the outside world — he calls this time the "fourth trimester." During my search, I noticed that there was a local class offered nearby. Spend $15, and you’d go home with an understanding of what the 5 S’s were and how to approach them, plus your own personal DVD and a blanket. I entered my credit card information without hesitation, believing my husband and I would arm ourselves for the insanity this baby was to bring with Karp's help.

A quick little run-down, in case you're unfamiliar with Dr. Harvey or the the "5 S’s." Karp is an L.A.-based pediatrician and an assistant professor at the Keck School of Medicine at The University of Southern California. His book, The Happiest Baby On The Block, identifies the " 5 S’s" that help parents re-create the noises, environment, and snug feelings they experienced in the womb: "swaddle," "side/stomach positioning," "shush," "swing," and "suck."

At the beginning, we really struggled with the swaddle. The swaddle is the confining of the baby's body, so that they still have some feeling of being enclosed, like they were in the womb. And in there, baby feels safe. Protected. So after they come out into the wild wild world, it can benefit them to have that bodily feeling recreated. When their arms flail about, it can startle the sh*t out of them, which interrupts their sleep.

He responded so well to the technique, it made me wonder whether we should try to swaddle ourselves. I haven’t calmed down that quickly in ages.

Now, the perfect swaddle is not easy. You have to practically create an origami frog to get the baby in correctly, all of the corners exactly right and everything tucked perfectly. You have to use the right blanket. (Size matters, for the fold — material matters, for the heat aspect.) Frankly, learning how to get it all just right sucked. But after a while, we got the hang of it and turned to it every time that kid was tired.

The side positioning was a bit of a loser. SIDS research tells us babies should sleep on their backs, but they tend to sleep much more peacefully on their bellies or their sides. Harvey Karp suggests that after you've swaddled your baby, you can flip them onto their sides (kind of like balancing on your arms) in order to soothe them further. Then, once they go to sleep, you can drop them onto their backs into their crib. Our baby acted exactly the same when we flipped him onto our forearms as he did when he was on his back, so we didn't use this positioning after trying it out a few times.

And while it’s fairly natural to want to admonish and/or pacify your infant verbally when he is out of his damn mind, Karp just suggests funneling the desperate and/or cruel words we want to say into a womb-like sound sensation: a quick, repeated, and loud “shush” directly into the ear of the infant when they are a scream machine. Honestly? It appeared to make my son even angrier than he was in the first place. I wanted it to work, because it almost seemed like an act of meditation, but this, too, didn’t take.

Now, like most new parents, we were given a baby swing. The swing moved from left to right or front to back, depending on the setting you chose. I wouldn't say Oliver hated it by any means, but it was kind of like the side positioning in the sense that his behavior didn’t change by being put in it. Either he liked it OK, or he tolerated it just enough – I’ll never know which. He just sat in there with a blank stare, occasionally muttering something about how parents in this day and age use too many appliances in child-rearing.

Moving on to the "suck." Pacifiers are the easiest of all the methods — so passive! Just stick this little piece of plastic into your infant's mouth! We had expected binkies to be our best friends. I’ve seen other people’s babies turn into silent monks the minute the things were shoved into their mouths. I assumed our baby would behave the same way, but that wasn't the case. Most of the time, he didn’t want a binky. He sucked on his first two fingers, but only when he was sleepy.

I wouldn’t go so far as to say that Karp's methodology paved the road for our parental happiness, but he certainly helped us with our baby's sleep, which in turn helped us sleep.

Truthfully, the swaddle was our only solid go-to of the bunch. It just worked so well on its own. When he showed signs of agitation or fatigue, we would wrap him up like a baby burrito and shove him in his bouncer or bed. Sweet relief would follow. He responded so well to the technique, it made me wonder whether we should try to swaddle ourselves. I haven’t calmed down that quickly in ages.

We swaddled his ass until his arms were so strong they could no longer be contained. We got to the point that we were re-doing the swaddle every five minutes, and that’s when we knew we had to give it up. Our baby demanded to be free. The baby straightjacket wasn’t working anymore. He knew how sweet it felt to throw his limbs about and he demanded that freedom.

Once he was sleeping without being swaddled, he did wake more often but was always able to soothe himself. We'd stay out of his room unless he was totally freaking out. If he made noises or cried out, we just flat-out ignored him, and waited for the baby monitor to go silent.

I wouldn’t go so far as to say that Karp's methodology paved the road for our parental happiness, but he certainly helped us with our baby's sleep, which in turn helped us sleep. Swaddling our baby was something I doubt I would have tried without the research I was shown. I don't know how easily our son would have slept without the swaddle, but at this point, I don't have to know. I know that we were granted long stretches of sleep from about two months on, and that is worth a lot.