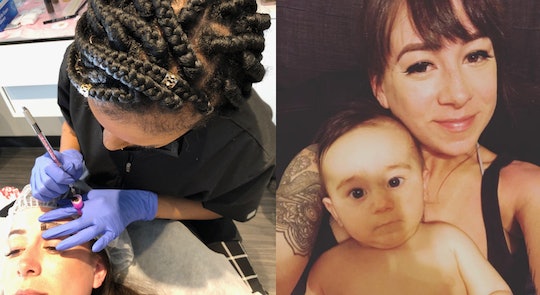 I Got Permanent Eyebrows Because *Two Toddlers,* People

My mornings are a blur of breakfasts, quick showers, hurried teeth-brushing sessions, random outfit pairings, and haphazardly constructed lunches before flying out the door towards pre-k drop off and my full-time job. I need more time, or at least a way to do more with the time I have. Which is why I tried microblading my eyebrows. Because, yes, I also want to be somewhat presentable when I go out into the world, and without wasting my precious time making sure my eyebrows are reasonably shaped and filled before walking out the door.

I had heard about microblading — a semi-permanent technique in which a certified technician uses a collection of tiny needles to slightly penetrate the skin with medical-grade pigment, creating fine lines that are made to look like life-like eyebrow hair — a few years ago. But, like any parent with a deeply engrained knowledge of the current Sesame Street plot but who hasn't seen the last four blockbuster Marvel movies, it took me a while to catch up to the trend.

But catch up I did, and the more I read about this semi-permanent option, the more I became convinced it was the answer to my morning ritual woes.

I mean, I looked angry.

I made an appointment to have my eyebrows microbladed at Wink Brow Bar in Brooklyn, New York. The treatment isn't cheap ($750 for an initial treatment, then $300 for a touch-up any time after eight weeks), but I looked at microblading the same way I looked at tattoos: if it's cheap, it's probably going to look like trash. And lest we forget, someone was going to be using tiny blades to cut into the skin on my face, so I wanted to make sure that person was happy, well paid, and knowledgable.

Walking into the salon, I felt at ease. This was the first time in a long time that I would be setting aside two hours to focus on myself, and only myself, sans my children. That, in and of itself, felt like a vacation.

Step One: Creating The Sketch

After a glass of water and some small talk came cleaning my eyebrows and drawing a blueprint of what I wanted my eyebrows to look like. This process took longer than I had anticipated, but I appreciated how detail-oriented the technician was: she wiped, re-drew, wiped, then re-drew my eyebrows a good five times, measuring both to make sure they were equal and the thickness and shape I wanted. We also took a great deal of time finding the correct pigment color and, in the end, my technician combined two colors to make sure what was microbladed would match my natural brow.

I was taken aback when I looked at my now-drawn-on-soon-to-be-microbladed eyebrows. I mean, I looked angry. But I was assured that the end result wouldn't be as "intense," and the final result would look much more natural.

The technician then applied a numbing cream so the pain would be minimal, and I was told I had to wait 20 minutes for the cream to do it's job before we could begin. During that time I was able to get to know my technician a little better. She used to work dispatch for the NYPD, and until her aunt was diagnosed with cancer. Upon learning that her aunt was having a difficult time reconciling with hair loss, most notably the loss of her eyebrows, during treatments, my technician looked up alternatives to simply drawing on eyebrows and came across microblading. Her aunt didn't like the idea of someone poking her with needles, but said she would agree to have it done if her niece, my technician, learned how to do it and could be the one to provide the treatment to her.

My technician went to school and became certified in microblading, though not before her aunt passed away from cancer. But my technician fell in love with the treatment, so much so that she quit her job to microblade full-time. She told me that every time she microblades a client she thinks about her aunt, and how, through her, she had found her calling.

I asked if crying would at all affect the numbing cream. She said no.

After the numbing cream had taken affect, it was time to start the microblading. My technician did one initial, tiny stroke with the blades to see if I could feel anything. I couldn't. In fact, I didn't feel anything during the hour or so that I was microbladed. It was a completely painless treatment.

I did, however, hear something. Every time my technician drug the blades across my eyebrow, I could hear my skin... separate. It sounded like a person walking on paper. Just a crinkling and crackling. It was a little surprising, but, honestly, after a while even the sound of the treatment was soothing. I ended up falling a sleep about 20 or so minutes after the technician started (I can also blame my 6-month-old son, who is currently going through a horrendous sleep regression that's sure to end me), and woke up when she was finishing up my second eyebrow.

The end result was truly astonishing. I was surprised at how realistic the microblading looked. I had to ask the technician to pick the pigment apart from my actual eyebrow hair: that's how uncanny it all looked.

Not having to worry about filling in my eyebrows with a pencil is awesome.

I was told that the color would fade slightly in a few days, so they wouldn't be as prominent, and if I came back after eight weeks for a reapplication, my microbladed eyebrows would last two years.

After care was relatively easy. I couldn't let my eyebrows get wet for two days, but after 48 hours it was OK. On about day four they started to itch (much like a healing tattoo starts to itch a few days afterwards), but it was minimal. I did experience some slight discomfort when the numbing cream wore off — and I did have a small headache the next day.

But the end result was exactly what I was looking for, and now that it has been two weeks I can say that not having to worry about filling in my eyebrows with a pencil is awesome. It's a small thing I can cross off my to-do list in the morning, sure, but any mom will tell you that even small things make a big difference.

My mornings are still a blur of breakfasts, quick showers, hurried teeth-brushing sessions, random outfit pairings, and haphazardly constructed lunches, but when I walk out the door my eyebrows look effortlessly flawless.