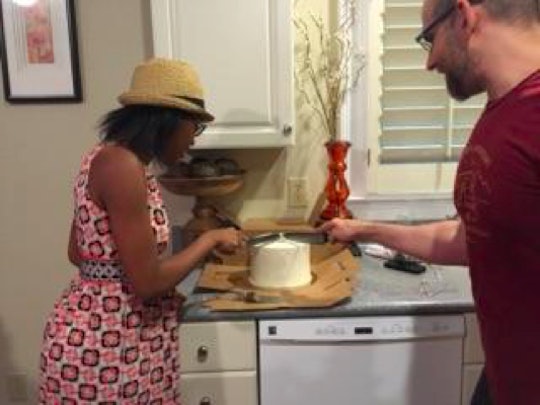 I Tried Old Wives' Tales To Predict Baby's Gender, & This Is What Happened

After finding out I was pregnant for the second time, my partner and I waited a few weeks before telling friends and family that I was due with baby number two. Call it Southern superstition, but I come from a family of strong believers in avoiding sharing the news until you pass the 12-week mark. Once we did start filling everyone in on our exciting news, I found myself on receiving end of questions like, “do you feel like it’s a girl this time?” real quick. All anybody could talk about was predicting baby's sex, if it worked, and if we'd tried it yet. And if we hadn't, what old wives' tales would we try to find out baby's sex?

Not even halfway through my pregnancy and people were convinced that I was carrying differently, so it must be a girl this time around (we were already parents to a boy). Lists of tests and criteria that could help me “confirm” the sex of baby came pouring in from virtually every side, long before the anatomy ultrasound at 20 weeks was even a blip on my calendar.

At around 12 weeks, I did start to feel vastly different than I did during my first pregnancy, but that didn't automatically mean that I was having a girl instead of a boy. Maybe it just meant that my pregnancy was different. But then I stopped to think: could carrying and feeling different the second time around truly mean something? My husband and I thought it'd be a fun experience, not to mention great material for our future child’s baby book, to put a bunch of old wives' tales to the test.

Starting at 12-week mark, we went through the various old wives' tales to try and predict what we were having. The experiment would last until week 15 when we planned to host a gender reveal party. (Which, when you think about it, is pretty ironic given that gender is a social and behavior construct and sex actually refers to biological and physiological characteristics.)

Together with friends and family surrounding us, we'd finally know the answer. But it wouldn't help to guess along the way. Would we be right? Would we be wrong?

Turns out there were tons of ways to find out.

The Chinese Gender Predictor determines the likelihood of the sex of your baby based upon your age at conception and the month in which you became pregnant. It isn't a concrete determiner (in fact, What To Expect advises readers not to count on the gender predictor's results, but that doesn't mean it isn't fun to try it out). Many sites offer the test, but I tried one of the most popular gender tests on Babycenter.

The Results: After putting in my age (24) and the month of conception (March), the test told us that we were having a boy!

No matter what old wives' tale you subscribe to, they all practically say the same thing about salty versus sweet cravings. If you're craving sweets, it's a girl, and if you crave salty snacks, it's a boy. There's no rhyme or reason why one could signal boy and the other means girl, but still, it hasn't stopped generations of women from believing this, no matter how untrue it may be.

The Results: At the end of my first trimester, I pretty much wanted a mix of everything, so this test wasn't exactly the most helpful in giving me a clear answer on what (or who) I was carrying. Plus, my cravings differed every day, and you don't have to be pregnant for your tastebuds to want something else on any given occasion. That said, though, I want salty foods more on average, so according to that logic, I was having a boy.

And just like that, the old wives' were two for two.

OK, this particular tale is a little out there, but bear with me, alright? It says that, in the early morning, how your pee reacts to a tablespoon of baking soda determines boy or a girl. I'm not exactly sure why this is the case, or how it was even invented, but if your pee fizzles like soda, you're having a boy, and if it stays flat, you're going to deliver a girl.

The Results: When I followed the instructions I found on the internet, my baking-soda mixture bubbled up almost like beer would after you pour it. Taking that as a clear "fizzle," it looks like I was having another boy.

At this point, we were three for three and I was beginning to wonder: Was my son going to have a little brother?

There are two versions of this test, and they both work about the same. One version, the ring test, tells you to tie a string around your wedding band and hold it over your stomach. If it moves in circles, you're having a girl. If it moves from side-to-side, you're having a boy. The other, the needle test, is a bit more involved, but basically  you do the same thing, only you can hold the needle above your hand or your belly. If it circles, it's a girl, and if moves back and forth in a line, it's a boy. TBH, I prefer the needle test, simply because there so much variation in ring size that could effect the results. So that's what I tried.

The Results: After holding the needle over my stomach, it soon started to move in a circular motion. Now, I'm not sure if that's because I was subconsciously moving it in that director if it was really moving on its own, and if it was, let's not even go there because that's a little creepy. This particular tale left way too much up to chance for me to truly believe in it, but based off the results, I'm pregnant with a baby girl.

I'm really not 100 percent sold on how morning sickness is an indicator of the sex of the tiny human I'm carrying around, but we're not here to ask questions, OK? So far during this pregnancy I've been experiencing some one-of-a-kind morning sickness, and if you ask the old wives, they'll tell you that it's because I'm having girl. But here's where things get tricky: if  your morning sickness is moderate to nonexistent, you're having a girl. See what I mean? The old wives weren't exactly cut and dry about the dry heaving.

The Results: Look, I've been spending a lot of quality time getting to know my bathroom this pregnancy. It hasn't exactly been a walk in the park, but if my constant nausea and frequent vomiting is to be believed, then it looks like I'm carrying a girl.

The story goes that carrying high means you're having a girl, and a low belly means it's a boy. Here's the thing, though: in the first few months of pregnancy, you don't exactly look pregnant, so there's no real way to know if you're carrying high or low. For people who are either taller, shorter, or who fall somewhere in the middle, what's "high" and "low" varies greatly. So basically, there's no real way to tell.

The Results: Because a "high" or "low" belly was so hard to figure out, I asked 10 different family members what they thought. Six voted in favor of a high belly, and four said they thought I was looking a little low. As for me? I just thought I looked pregnant.

Given the mixed results from the old wives' tales we tried, my husband and I had a much harder time coming to an agreement on what sex we thought baby would be. I was completely set on the idea this was going to be our second boy; he thought I was carrying a girl, given all the differences between my two pregnancies and my morning sickness.

All along, we thought that the old wives' tales would help us, at least giving us a few hints as to whether we were going to be parents to a baby girl or a baby boy. When all was said and done, though, we were right back where we'd started: confused, anxious to know, and a little more nauseous than before.

When the time came to find out once and for all what we were expecting, we asked our ultrasound tech to put the sex into an envelope so that we could find out surrounded by friends and family. We gave the envelope to a friend who works for our local bakery with simple instructions: the inside of the cake would be blue or pink, and we'd have an answer for sure. Gender reveal cakes are all the rage, and we loved the idea of sharing this special moment surrounded by everyone who's loved, supported, and been part of our story.

Before cutting the cake, we let everyone place their final bets: Was it a boy? Was it a girl?

Did The Old Wives' Tales Work?

All in all, I can’t say if any of these old wives' tales really had any validity, but it was a fun to share the experience with family and friends. It takes your thoughts away from the what-ifs and fears and instead it gave me a chance to focus on something a little more exciting, regardless of whether or not it was actually true.

There's no harm in trying wives' tales, and I'd recommend trying all of 'em just for kicks. Plus, if you're anything like me, just trust your intuition and there's a good chance you might be right.

More Like This
A C-Section Actually Doesn't Take As Long As You Think, According To Experts
18 Pregnancy Announcement Ideas Break The Good News To Your Family
The Ultimate Baby Registry Checklist
24 Beautiful Baby Names With The Same Vibe As Mila