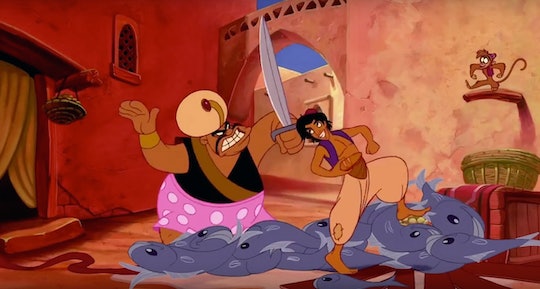 I Tried Parenting In Disney Quotes For A Week, Because Duh, I Am An Adult

Referring to myself as a Disney aficionado would be an understatement. I was born and raised in the Sunshine State and spent countless days at Disney World. I have a tattoo of Mickey on my right ankle, a strange co-dependent relationship with Eeyore, and I haven’t met a Disney movie I don’t immediately love. I am something of a Disney freak. So when challenged to parent my 2-year-old daughter using nothing but Disney quotes, I jumped at the chance. I mean, how hard would it be?

Turns out, it’s impossible … especially if you’re talking to a toddler using only Disney lines. But after establishing some ground rules (I’d use Disney quotes whenever feasible; I’d always use at least one quote when my daughter was throwing a tantrum, demanding something, or asking me a question; and I’d allow for ad-libbing when it came to safety), I stuck to the script.

Armed with an arsenal of notable Disney quotes and the long-since forgotten catchphrases of my favorite characters, I began my experiment. Would reciting Disney lines make me a better parent? Would my daughter understand what I was asking of her? Would it work? Would I fail? Off the bat, I noticed few lines slipped in rather nicely -- Donald Duck’s “aw, phooey!” perfectly replaced “uh oh” and “oh no”; Baymax’s trademark, “On a scale of 1 to 10, how would you rate your pain?” became commonplace thanks to the sheer number of “boo boos” 2 year old’s acquire, and Dori’s “just keep swimming” became our mantra in and out of the pool.

Others, I’d soon realize, would require a bit more context and a lot more explanation.

1. “The Seaweed Is Always Greener In Somebody Else’s Lake.” – Sebastian, The Little Mermaid

My daughter was in the throes of a tantrum when I whipped this one out. (She actually said, “Go away, Mommy, not nice,” and shut her bedroom door in my face.) To say I was livid would be an understatement, but instead of screaming I stopped, took a breath, and channelled the wisdom of my favorite sea creature, Sebastian. Unfortunately my daughter hasn’t yet seen The Little Mermaid so not only could she care less about my cranky little crab friend,  the concept of looking at the world through rose-colored lenses was lost on her young mind.

The outcome: She kept crying and slamming doors. I took a deep breath, kept going and “kept swimming.”

Overall effectiveness: 2/5 fireworks, mainly because it made me feel better, not her.

2. “Anyone Can. That Doesn’t Mean That Anyone Should.” – Remy, Ratatouille

I was washing dishes in the kitchen when I heard a slight bang. I looked over my shoulder, into the dining room, and saw one of our IKEA chairs moving. Though I didn’t see the perpetrator, her 3-foot frame was obscured by our kitchen island, I knew it was her. “Amelia, don’t do that,” I yelled. I hoped I could buy myself another minute, maybe two, but not more than 30 seconds later I heard her exclaim, “I did it! I did it!”

I turned around, took a breath and responded: “You did. Now get down.”

“No.” Ugh. There is was: my daughter’s favorite word.

“Yes. Just because you can climb on the dining room table doesn’t mean you should.”

The outcome: My daughter laughed, which she often does when I discipline her, but after a bit of persistent urging -- and turning off the water, which meant I was serious -- she climbed down. She ran off to her room, beaming with “I got away with it” pride and I followed with a similar smile because I disciplined her without yelling (or sounding like a broken record).

3. “You’re Only In Trouble If You Get Caught.” — Aladdin, Aladdin

I’ll admit it: maybe this isn’t the best lesson to be teaching my tyke, but when playing in her closet one afternoon (an activity that drives her father bonkers), this was the one that came to mind. You see, her father always -- and I mean always -- tells her to stop. He’s afraid she’ll pinch her fingers or, worse, break off a door. But as she sat on a pile of shoes, opening and closing the slider, playing peek-a-boo and saying “I see you” every time her little head popped out, I couldn’t help it. Daddy wouldn’t let her do it but it was Tuesday, so Daddy wouldn’t know.

The outcome: The upside was this mantra inspires creativity and encourages spontaneity, and my daughter and I got to have one heck of a good time. The downside? My daughter cannot yet comprehend this only applies to certain -- i.e. playful and non-damaging -- behaviors.

I feel a little guilty including these quotes because there is nothing innately Disney about them. (I simply found both while searching for character catchphrases during pre-experiment research.) But they are appropriate for two reasons: 1) at my daughter’s age, hugs are essential and tears are the norm, like it or not; and 2) at any age, hugs should be essential and crying can, and should, be embraced. In fact, in the course of this experiment I used these quotes no less than a dozen times — when she ran into a wall, and cried; when we left the playground and she cried; and when she slipped, stubber her toe, and cried.

The outcome: Each of these incidents, aside from the playground, was met with a tearful “OK” and outstretched arms from her and a compassionate and empathetic embrace -- and kiss -- from me. (The playground still ended in a full-blown tantrum.)

Thank goodness for this quote -- and for you Jack Sparrow. (And thank you, Johnny Depp, for, ya know, existing.) ! It was exactly what I needed when my daughter threw a stupid tantrum because I wouldn’t let her watch “Elmo” (what she calls Sesame Street) for the fourth time. (She’s 2, and maybe I am naive or idealistic, but I like to limit her screen time.)

When she suggested we watch “Elmo”, I suggested we color a picture of Elmo instead. Seems like a good deal, right? Wrong! All hell broke loose, and as she walked around the house — a screaming, tantrumming, blubbering mess —I said, in the calmest voice I could muster, “Honey, the problem isn’t that we cannot watch TV. The problem is your attitude about the problem.”

Boom. You got served, kid. Game over.

Overall effectiveness (for her): 1/5 fireworks

Overall effectiveness (for me): 5/5 fireworks

My daughter is hyper. What 2 year old isn’t? She’s a happy goofball who sings songs about whatever’s in sight, licks doors just because, and says hello to everyone -- and I mean everyone -- she meets. (And she will not stop saying “hi” and “hello” until you respond.) So in one of her amped-up frenzies (lap number 52 around the kitchen island), I used this one because it’s true. She is a weirdo, but that is why I like her; nay, that is why I love her.

I also used it when she was singing/shrieking in the grocery store at checkout and when she was “watching” TV, with a blanket over her head.

The outcome: Every time I said it, she smiled, giggled, and said, “I weird.” That’s right, baby. Be weird. Be different. Be you.

Did Disney Help My Parenting At All?

After a few days of overarching positivity and an insane amount of personal discipline (talking to a toddler is instinctive, and I had to stop my own pre-recorded tape from playing), I found out that while I may love Disney, using somebody else’s words to script my own life was strange. Sure, I was able to impart a bit of wisdom on my toddler, but it’s impossible to live life only in extremes, dreams, and grand ideas. It’s impossible to live in a world of happily ever after, clinging to the idea that everything will be OK.

But while it may be impossible to live a fairy tale, these quotes did force me to stop and think about what I was saying to my tyke. They were good reminders of ideals I aspire to but often stray from. (“No” and “don’t do that” are so damn easy.) They were good reminders of who I want to be, as a woman, a role model, and a parent, and they were great reminders that while life gets serious, maybe sometimes -- just sometimes -- I need to go with the flow. Sometimes we all just need to get in trouble and be weird, as long as we aren’t caught.