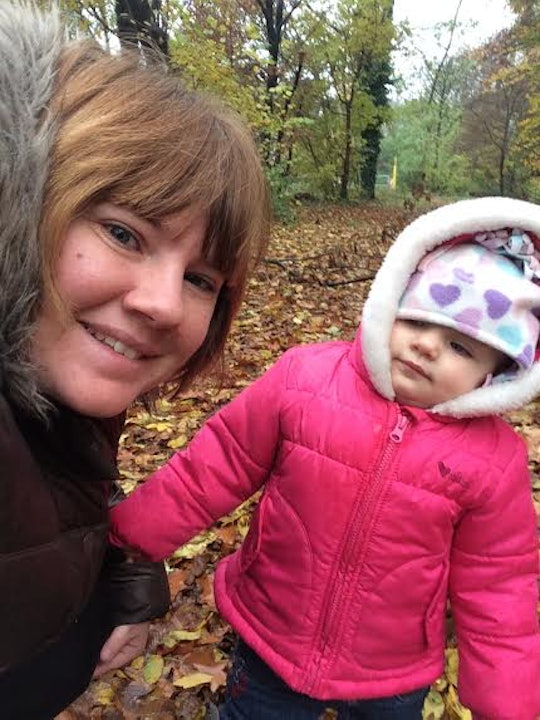 A month ago, my 14-month-old daughter, husband, and I moved to Germany, where we'll be living for the next four months. My partner is English, but he speaks German and was an exchange student in Germany during high school, so we moved to a city called Duisburg, where our good friends live, before we move to England next year.

Right at the start of our move, I figured I might as well do some research into parenting like a German, considering we'd be here for so long. From reading parenting blogs and speaking with my German friends, I discovered that German early-childhood parenting emphasizes the importance of outdoor play and places a high value on teaching kids independence and responsibility from an early age, unlike American parents, who tend to hover over their kids and keep them indoors more often.

I knew I wanted to immerse myself in this brave new world of parenting. So I decided to take a cue from my new German friends and start parenting like them for a week.

I decided that for the seven days I’d be parenting like a German, I'd feed my daughter traditional German kids' meals and let her watch German kids' TV, but I also wanted to focus on several main components of German parenting, such as being outdoors. While in Germany, I've seen everyone from crawling infants to active teens out playing in the nastiest of weather, leading me to believe that Germans operate according to the mentality that there is no such thing as bad weather, only inadequate clothing. So I challenged myself to go outside with my daughter every single day, regardless of how bad the weather was.

I also decided that I'd focus on free play rather than early literacy, as I’d read German parents don’t worry much about academics until it’s actually time for school (as opposed to American parents, who try to prep their kids for Harvard while they're basically in utero). I’d read that German moms teach their kids the value of independence and eschew “helicopter” parenting, so I decided I'd cut my daughter a little slack whole she was in Germany and let her explore her new surroundings a bit more. With the plan in place for the week, I was excited to see how this overprotective American mom would fare.

Day 1: A Trip To The Grocery Store

I woke up to gray skies and rain and immediately thought, "Really? On the first day, I have to go out in this mess?" But since I challenged myself to go outside everyday, getting out the door was a must.

Grateful I had bought a rain cover for the stroller, I ventured out with my daughter for the mile-long walk to LIDL, a German supermarket. Once we were there, my daughter did a horrendous poo, and there were no bathrooms at the store, so I had to wait until we got home to change her. I bought some famous German bread rolls to help my daughter get through the poopy ride in her stroller back home.

Day 2: A Breath Of Fresh Air

Once again, the weather was rainy and chilly, but I nonetheless took my daughter out for a walk in the city forest near our house. Although I wouldn't normally have let her out of her stroller for an extended period of time, I decided to take a cue from German moms and let her go out and explore. As a toddler, she has no qualms about getting wet and a little dirty, and she enjoyed picking up the leaves and toddling around. I’m happy that her coat and boots were sufficient protection against the weather, but even though she was wearing leggings under her jeans, I realized that purchasing a rain suit would likely be in my future.

I decided to take my daughter to a playground near our apartment. At this point, we had gotten used to the overcast weather, and I noticed that going out every day seemed to make my daughter less restless and more content when she was at home. German parents were right: A good romp outside is a great way to calm an ever-curious tot.

For dinner that night, I let my daughter try rye bread on an open-faced sandwich, a common German meal for children and adults alike. She didn’t like the bread at all, even though she typically loves normal sandwich bread, but she ate the turkey and cheese with aplomb.

Day 4: Paper In This Bin, Please

Germans have an elaborate recycling system, so we've been teaching my daughter where to put the trash. Even at 14 months, she's definitely getting the hang of it. She loved taking her diapers and putting them in the left side of the trash can, and we made sure to give her boxes and paper to put in the right side. We put our plastic drink bottles in a bag under the sink, and she got a major kick out of taking the bottles out of the bag and dumping them all over the kitchen floor.

She had the cutest look of triumph on her face when she sauntered into the kitchen, as if she understood and appreciated the bit of independence I gave her.

In the afternoon, after we went for a quick walk in the forest, I decided to adopt a more relaxed, German-inspired approach to outdoor play and let my daughter go out on the balcony by herself while I cleaned the kitchen. (The balcony has high walls, so there's no way she could fall off: the most she could do was fall into a potted shrub.) It gave me the few minutes I needed to finish cleaning the kitchen from lunch, and she had the cutest look of triumph on her face when she sauntered into the kitchen again, as if she understood and appreciated the bit of independence I gave her.

Day 5: Lions And Tigers And Bears, Oh My

I was most excited for our plan to visit the Duisburg Zoo, which marked my daughter’s very first trip to the zoo. I was told by my German friend that most parents take their children to the zoo, and it was pretty much a staple activity for families in Duisburg. After we had seen all the animals, we got sweet popcorn at a kiosk as a special treat.

While planning this experiment, I hadn't considered the fact that on Sundays in Germany, pretty much every store is closed, due in large part to old labor laws. If you need groceries or toilet paper or anything else for Sunday, you have to purchase them the day before. While it can be a pain, it's nice that Sunday is a day of rest for most Germans, as no one is really out and about.

Unlike the previous days, my daughter and I spent the morning and most of the afternoon hanging out together in our apartment. My daughter played with her new German toy, a HABA wooden puzzle board, as well as some wooden farm animals we had just bought for her. She seemed to prefer them to the American toys we brought with us, as I think she liked the sound of the wooden toys knocking against each other.

Because I had read that German parents tend to focus more on free play for toddlers and less on encouraging early literacy, I made a point of not offering my daughter any books this week. Nonetheless, she picked them off the shelf and brought them to me of her own accord. It made me realize that all the months I spent reading to her back home in the United States had already taught her a value for reading, which gave me a great deal of pride.

Throughout the week, we had the German kids' TV channel KIKA on the television. One morning, while my daughter played and watched TV, I overheard the name “Pippi Langstrumpf” being sung on TV, among many other German words I didn't understand. Sure enough, I looked up to see see a cartoon girl with red hair, freckles, and pigtails. It was Pippi Longstocking, whom I had grown up watching on TV .

I was delighted to find that there was a German-dubbed Pippi Longstocking (sorry, Pippi Langstrumpf) cartoon that aired on KIKA every day at 11:30 am. I was also pleased to find out that KIKA featured a show for young children that teaches English. Despite the guidelines of the experiment, it was refreshing to talk with my daughter about English words on a German program, when all the other cartoons and kids shows are in German. And who knows — because she's about to enter the talking stage, she might end up knowing some German after all!

That night for dinner, my daughter had mashed potatoes with spinach and fischstäbchen, or fish sticks, as my German friend mentioned this was a common meal she made for kids. I had never given my daughter spinach before, and surprisingly, she ate it with the potatoes like it was her favorite dish, macaroni and cheese. (She was, however, a little less enthusiastic about the fischstäbchen.)

By the end of the experiment, I realized that trying out these few German paenting principles helped prepare me for the rest of our time living here. It made me feel more confident in our surroundings, and excited about the opportunity to "blend in" with other parents. Even though we're only living in Germany for a few more months, I hope the German emphasis on outdoor recreation and giving children their independence stays with me for a while.

Even though my daughter is only 14 months old, trusting her with more freedom than I might have given her back home in the States sounds like a good way to teach her the values of self-reliance and responsibility. Despite American parents' efforts to protect their children, I realized after this experiment that giving my daughter the space to make her own mistakes and learn from them will likely do her more good than harm.