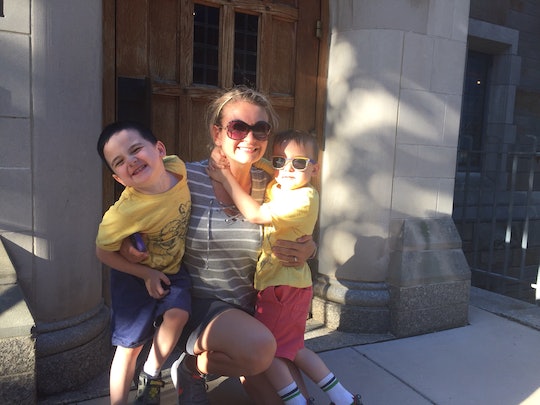 Different cultures have different ways of raising children. We all love to work a good red, white, and blue lewk around the 4th of July, but the truth is that American parenting isn't necessarily the best way out there. While watching House Hunters International way past my bedtime at night, I saw families opting to move their kids out of the US in order to raise them a different way. Heading to the tropics or the delicious bakeries of France makes sense to me, but I was surprised to see one family packing up and heading to Russia because they liked how the Russians parent.

Curious, I asked my brother-in-law, who was born in Russia, how I'd go about raising my own 4-year-old boys the Russian way. My brother-in-law is a great guy. He's smart, kind, cultural, and athletic. He's also fairy tidy. These are all qualities I'd love to see in my own kids. So with his help, I decided to spend a week raising my boys like a Russian parent.

What does that mean exactly? According to him, there are five things all Russian parents do: make their children do chores, feed them soup, let them play outside (no matter the weather), make them take ballet lessons, and let them stay up as late as they want. I was doubtful this would work (especially the bedtime rule) but I was willing to try. So I followed these rules for a full week, and here's what happened.

1) Making Your Kids Do Chores

Even though my kids are 4, to me they still seem like babies. I'd always planned to create a chore chart to get them to make their beds, clean their toys, and put their shoes in the shoe bin, but I thought I would wait till they were in kindergarten to start that. I didn't think they were old enough or mature enough to handle responsibilities now.

But since Russian parents give their kids chores from a young age, this week I wrote down a wish list of all the things I wished the boys could do on their own without my assistance: get themselves dressed, brush their own teeth, clear the table after meals, and clean up their shoes and toys every night.

The Russian way of parenting is less dramatic and more straightforward. You want your kids to learn how to clean? Hand them a rag and tell them to wipe down the windows.

I was surprised both by how much they were able to do on their own and by how much they wanted to do things independently. Sure, I had to help them get their back teeth while brushing, and there were a few times when they came out of their bedroom with their shorts on backwards, but generally speaking, they were really proud of themselves for being able to take control of tasks. And I loved it because I wasn't standing over them saying, "Get your socks, no your socks, THE SOCKS THEY'RE RIGHT THERE!" every morning.

My partner shares the household chores with me, so it's important to me that my boys follow in his footsteps by viewing household chores as human work, not "women's work." I just always thought that lesson would come when they were older, in the form of a dinnertime conversation complete with a discussion about feminism. The Russian way of parenting, however, is less dramatic and more straightforward. You want your kids to learn how to clean? Hand them a rag and tell them to wipe down the windows. I realized not every life lesson has to be a big production.

When I asked my brother-in-law how the Russians approach mealtimes with kids, his advice struck me as a little odd. "Dinners are always soup and the main meal," he told me. "Can't have dinner without soup." It's currently June and a trillion degrees out, but in the spirit of the experiment, I decided soup was on the menu for the week.

I usually avoid giving the boys soup unless they're sick and refuse to eat. They drip it all over themselves and the slurping sounds they make hurt my soul as well as my ears. Plus I never really thought soup was all that nutritious.

I'm officially team soup with dinner, even in the summer.

Turns out Russian parents are totally onto something with this soup trick. My boys typically chatter non-stop during meals, which can be frustrating because I want them to eat. Plus it would be nice to get a full sentence out to my partner without being interrupted. But when I put bowls of soup in front of them, suddenly they weren't interested in telling me the plot of the latest episode of Super Wings. They were focused on getting that spoon from the bowls to their mouths. I can handle some slurping it if means having an adult conversation for a few minutes.

I fully admit that I have zero chill. I know some parents can sit back and let their kids eat as little or as much as they want at dinner, but when I make a meal, I want my kids to eat at least a decent amount of it. I worry about their growth and I hate to waste food. The beauty of feeding them soup is that I didn't have to lean over their bowls with a ruler to figure out how much they've had. Giving them soup forces me to relax about how much they're eating. Dinner was much more pleasant for all of us this way because I wasn't bargaining with them to "take three more bites." They were also, for some reason, much more willing to eat vegetables when they were in soup. So I'm officially team soup with dinner, even in the summer.

Russian weathers aren't as brutal as you might believe, but they are long. Spring flowers don't usually start blooming there until late April or May. Rather than tell their kids to stay inside until it's warm enough to go out without a hat and gloves, Russian parents expose their kids to the elements right away.

When it comes to playing outside, my kids are special snowflakes. Sure, their preschool gives them outdoor recess twice a day, but only when it's not raining or wet from rain the night before. They also don't go outside if it's too windy, too cold, or too hot. I share the same disdain for the outdoors. I hate going out in the cold, and there needs to be cocoa and cookies in front of my face before I'll even think about putting on snowshoes. I also don't like to go outside when it's too hot, because I worry about them getting sunburned.

There's a big difference in their behavior when they get the chance to run around outside and when they don't.

So this entire week, I committed to letting the boys go out and play twice a day for 20 minutes, no matter what the weather was like. They loved running around in the rain, making wizard wands out of tree branches, and just laying out in the sun. They would come back inside calmer, ready to read or asking to do their alphabet workbooks.

Thanks to liberal sunscreen application, no one got a sunburn. And when they went out in the rain, no one ended up with a cold. I'm still not going to be the outdoorsy mom, but unless it's hailing, I'm going to make more of an effort to let my kids play outside, since they obviously love it.

According to my brother-in-law, girl, every Russian kid learns ballet. It's a part of their culture that's taken seriously, with more focus on technique and form than what sparkly costume they'll wear at the year-end recital.

I've never considered enrolling my boys in ballet. Not that I have an issue with boys who dance — it's more that like the Russians, I think of ballet as a serious art form, and they're silly little kids. I didn't think they'd enjoy the strict rules of feet positions and hand placements that come with ballet.

I understand the importance of wanting kids to be culturally educated, but ballet just wasn't for my boys. We'll stick to singing Hamilton tracks in the car, at least for now.

Sure enough, the boys giggled their way through plies and pirouettes. I put on Tchaikovsky every day for 20 minutes and tried to get them to get serious, but while they listen to their Taekwondo master raptly twice a week, they saw ballet as a joke.

I understand the importance of wanting kids to be culturally educated, but ballet just wasn't for my boys. We'll stick to singing Hamilton tracks in the car, at least for now.

My boys' bedtime is 7:30. Sometimes they go right down, but most nights I'm pacing between my bedroom and theirs for an hour or more trying to get them to go to sleep. I like that they have an early bedtime because it gives me time to write or work out or even just watch Netflix in the evening, but lately that early bedtime hasn't been happening very often.

According to my brother-in-law, Russian parents don't really have strict bedtimes for their kids. They're more likely to let their kids stay up until they fall asleep. They don't let bedtime stand in the way of the family going out in the evening. Meanwhile, I turn down any social event that would have my kids out past 7.

After a few days of getting turnt at night, they started to spend less time jumping around and more time chatting or reading books.

This week, I decided to give the boys the Russian bedtime schedule (i.e. no bedtime). I still put the boys in their room at 7:30, but rather then tell them they had to lay down and be quiet, I gave them some books and told them they could play.

Honestly, I hated the first few nights. The boys stayed up until almost 10, throwing stuffed animals around the room and building a fort with their blankets. I basically fell asleep right after they did. But after a few days of getting turnt at night, they started to spend less time jumping around and more time chatting or reading books.

With our usual bedtime routine, the boys are up shortly before dawn. When I let them fall asleep when they wanted to, they woke up almost a full hour later. As much as I like binge watching away my evenings, I'd rather sleep in later in the morning. Letting them go to bed when they want to instead of forcing a bedtime on them seems to be a lot of autonomy for a preschooler, but it's giving me more sleep, so I'm sticking with it. More sleep is always the right answer.

Do Moscow parents do it better?

On paper, Russian parenting seems to be an odd mix of the strict (ballet and chores for all) and relaxed (no bedtime, going outside everyday). But this unlikely combination works. Sometimes I feel like American parenting styles are so rigid: if you're an attachment parent or free-range you have to be like that in all aspects of childrearing. Not only is this hard to do in practice, but approaching life from the same mind frame all the time doesn't make sense. Russian parents know when to be strict and when to relax, and they do it all in the hopes of raising great kids. I'm not Russian by blood, but when it comes to making parenting choices, ypa!