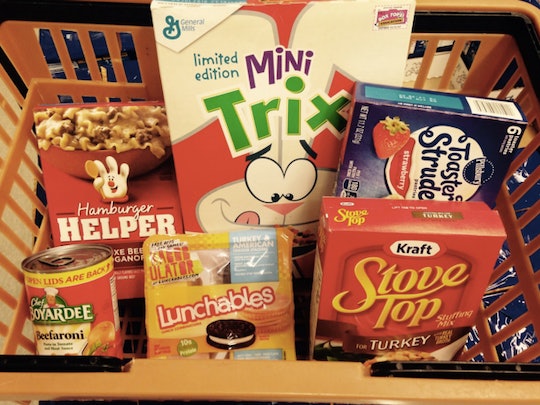 I Tried Parenting Like It Was The 80s All Over Again, & This Is What Happened When Everything Was Neon And Filled With Sugar

Like many who were raised in the neon-tinted '80s, I have fond memories of the food, games, and media of my childhood. We didn’t have kale, but we did have Saturday morning cartoons, and I like to think that was better. Even though I love to wax-poetic about parts of my childhood, there’s a huge difference in how I was raised compared to how I’m raising my own children.

In 2015, there’s a lot of pressure on adults with kids to do things a certain way. People have no problem policing others’ parenting choices, telling them us the foods we feed our kids must be healthy; the media, toys, and games we allow them to play must be educational; and the clothing we dress them in must be seasonally appropriate and stylish, and yes, it should be made with conflict-free cotton.

I was raised in a simpler time, on a steady diet of packaged foods and Nickelodeon, and I think I turned out alright. My mom is constantly telling me I should relax when it comes to parenting, and since she obviously did such a fantastic job herself, I decided to parent like it was the 1980s all over again. I wanted to see how raising my kids in a decade of neon stacked up to raising kids in 2015. Would I be happier or less stressed bringing my kids into the past? Or have we figured out a better way to raise kids here, in the future? Also, would my kids even get the socially important significance of Lunchables and Chef Boyardee?

For better or for worse, we were about to find out.

Look, I spend a lot of time trying to sneak spinach into my kids’ smoothies and wondering if I should be more concerned over high fructose corn syrup, so I was pretty excited to spend a week going back to a time when Pop-Tarts were considered part of a well-balanced breakfast.

Growing up in the '80s, food in my house was all about convenience, and most meals centered around our new-fangled microwave. Here in 2015, I don’t use a lot of pre-packaged foods, so cooking dinner takes me about an hour from start to finish. Revisiting some of the meals I loved as a child allowed me to cut down on the time I spent in the kitchen. Hamburger Helper was on the table in 30 minutes, while my from-scratch version of beef stroganoff takes twice as long. Even making lunch took less time doing it 80s style: instead of constructing grilled cheese sandwiches and slicing grapes, I just peeled the top off a Lunchable or heated up a can of Beefaroni. Thanks to all the time I saved not slaving over the stove, I was able to get more work and household stuff done this week.

But while I loved having late night snacks of Shark Bites and Toaster Strudel, my digestive track and taste buds have changed since I was a child. The pizza rolls I devoured after school as a kid were inedible to me as an adult, and even my kids got sick from eating too much rich Stouffer's mac and cheese. Food from the '80s might’ve been quick and easy to prepare, but it’s not exactly light fare.  My boys loved all the new foods they tried, and although they didn’t exactly each much of their Lunchables, stacking up the crackers and reorganizing the food into the different compartments kept them quiet and busy for a long time.

It was sad to find that some of my beloved '80s food didn't live up to the memories I had of them. I was so excited to have Chef Boyardee again, and it was devastating to me that it didn't taste as good in the new millennium.

I Got To Experiment With A Little Flash & Flair!

Sadly, the Rainbow Brite costume I wore for Halloween in kindergarten, first, and second grade doesn’t fit me anymore, so I was forced to find alternative outfits for my week as an '80s mom. Lucky for me, the very best part of '80s fashion — the black legging — is having a huge moment.  I combed through the back of my mom’s closet to find some sweaters with shoulder pads, pulled my t-shirt to one side with a scrunchie, D.J.Tanner-style, and set out for what was sure to be a week full of compliments on my wardrobe.

Although no one but my own mom had anything nice to say about my fabulously crunchy curls, I still think my fashion choices rocked. Not only did I feel good about myself the entire week, I was always super comfortable. Wearing bright-colored tops and eye makeup instead of my typical neutrals gave my mood a boost every time I looked in a mirror, and lycra bottoms made rolling on the floor and playing with the kids much easier than when I wear my skinny jeans.

I don’t know that I’ll continue to rock side ponytails on the regular, but this was a great lesson in the importance of dressing in something that makes me feel good, regardless of whether or not it’s “in style” at the moment. It was also a great reminder to lighten up and let my kids pick their own clothes when they want to. Bright colors and patterns were a huge part of what made '80s fashion so fun, and I can remember wearing triangles with stripes out in public as a kid and practically strutting down the street.

In my own parenting, I tend to give my kids free reign when it comes to their tops, but pants are jeans or neutral-colored sweats. This week, I gave in to their requests to wear pajama bottoms in public. They loved wearing bright orange shorts and pants covered in trucks with their colorful shirts, and although it didn’t come close to matching, it was great to see them so proud. Style is subjective, and if they feel confident in what they’re wearing, that’s what should matter most.

My Boys Got Familiar With Some Old School MJ

What’s better than suffering through a CD of nursery rhymes on long car rides? Listening to '80s pop music instead! I swapped out the kiddie songs and radio this week for '80s stations on Pandora, and I may never, ever go back.  Music from the '80s had such powerful melodies, and my kids had a blast dancing around the house all week long to Michael Jackson, Prince, and Whitney Houston.

I was happy to sing along and show them the “Thriller” dance, and it was surprising to realize how most music from the '80s was more family friendly in terms of song lyrics. I love Demi Lovato as much as the next gal, but the idea of listening to “Cool For The Summer” with my two toddler boys makes me blush.

We Watched All The Staples

Adults with kids were never really warned about the dangers of “too much screen time”. I remember being told that sitting too close to the television would hurt my eyes, but other than that, the TV was a good friend who was constantly around. I like to think I developed my verbal skills because of all those hours in front of the tube, so for a week I let the boys have as much screen time as they wanted.

Since my boys loved the trip down memory lane through my cassette collection, I decided to show them some of my favorite '80s movies, The Little Mermaid, The NeverEnding Story, and The Care Bears Movie II. I remember loving these films and watching them over and over, but now, watching them with my own kids, I was surprised by how slowly the movies were paced. Compared to today’s high-def films, my childhood favorites were dull. The kids struggled to pay attention, though I stuck it out to see the Childlike Empress and her amazing necklace-turned-tiara.

Although I don’t think it did any serious harm, a week of nonstop TV made my boys sluggish and less interested in their toys. Sure, I had more me time to play online or relax, but even I got bored after awhile. Since the kids didn’t feel like interacting with me as much since the TV was always on, it felt like I was babysitting rather than parenting. Modern-day parents focus on less screen time and more hands-on play, and honestly, I think it’s one of the few areas where we do know better than our parents did. TV time works better for my family when we limit it.

Playtime Was Fun —For Me!

My mom ruined my chances at an early retirement by tossing out all of my old Cabbage Patch Kids, and I didn’t want to order a View-Master only to have the kids fight over it — and they’ll touch my Lite-Brite over my dead body — so I decided their exposure to the glory that was '80s toys would fall into three camps: a Magna Doodle, some Little People (with the batteries taken out), and a few rousing games of Memory.

Fellow moms and dads, let me clue you in on a little secret: The best part of games from the 1980s is the quiet. Stock up on them. Now.

So many of the toys my kids currently have are battery-operated, and I didn’t realize how much noise they made until they were out of the picture. The lack of manufactured sounds encouraged my kids to make their own. I discovered that they knew the noises sirens and farm animals make, but they’ve just never had cause to make them before since the toys do all the work for them. Next time the batteries die in our toys, I may conveniently “forget” to replace them. It might’ve been a week filled with old-school MJ and 30-year-old movies, but my boys’ imaginations were alive and well.

Oh, and as it turns out, it doesn’t matter whether you’re 8 or 31, Mousetrap is still really complicated and hard to play. Do better, Milton Bradley. Do better.

After a week of living like my own mom did, I realized just how awesome it must’ve been to be a woman with kids during that decade. Clothing was comfortable, television was a regular babysitter, and chocolate-covered pastries stuffed with marshmallows were an acceptable breakfast food. Though, TBH, it can still be a breakfast food if you try hard enough.

Reliving my childhood as an adult was a good reminder that moderation is important in everything — especially TV — and that I don’t have to constantly engage with my children in order to feel like I’m raising them successfully. Even though the average child’s diet in 2015 may contain more nutrients than it did back then, until we petition to bring back leg warmers and the mid-song electric guitar solo, it’s hard to say if parents in the new millennium are truly doing it better.

More Like This
12 Helpful Tips For Hiking With Kids
15 Adorable CoComelon-Themed Costumes You Can Buy Or DIY
18 Spooky Disney Songs To Make The Ultimate Halloween Playlist
Sex And Mom Guilt: When I Date Someone New, Am I Cheating On My Kids?